The Moral Law in the Bible and the Ceremonial Law

The laws in the Bible, there are some. There is so much law in the Bible that it is often difficult to know how to do things in the Bible. It is on this subject that wants to overcome this article. In the Bible, especially in the Scriptures (what is called “Old Testament” in our Bibles), we distinguish different types of laws.

The Moral Law in the Bible and the Ceremonial Law 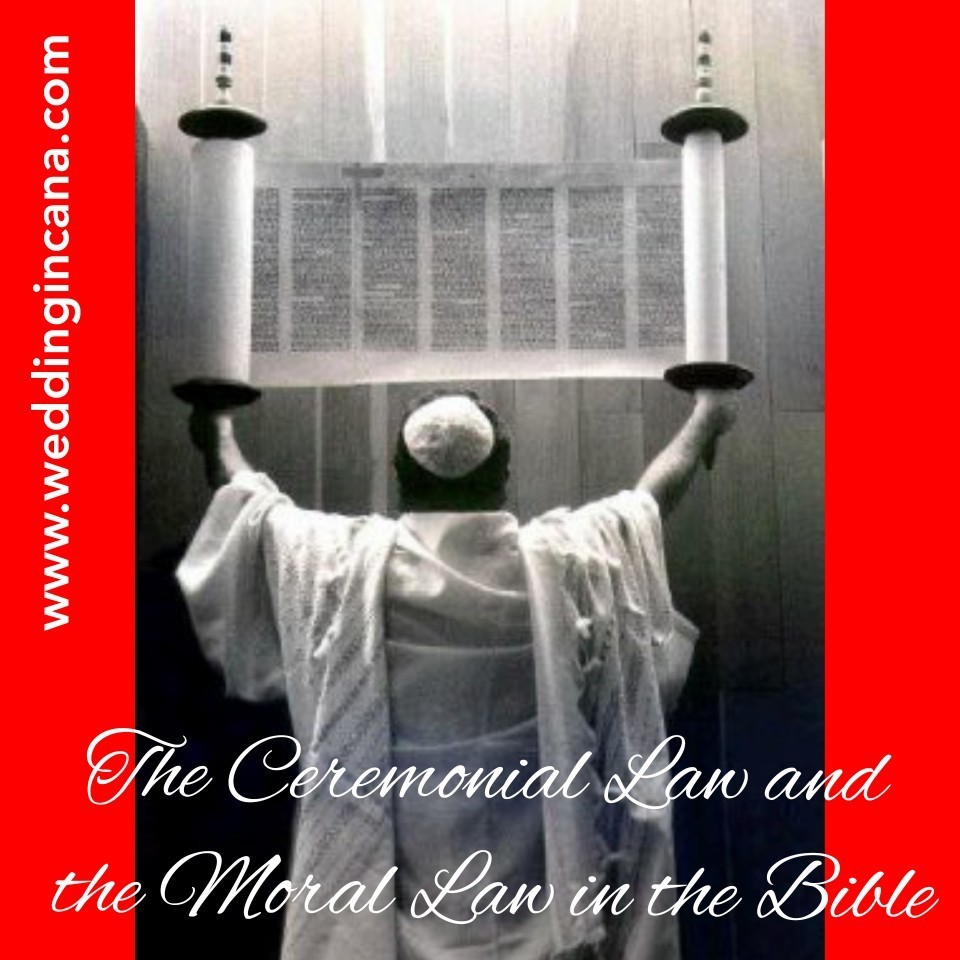 The Ceremonial Law in the Bible

The ceremonial law considers the laws about worship and pertains to the Tabernacle: sacrifices, ablutions, service in the Temple, etc. For example, the Jews had all kinds of rites to respect, such as purifying themselves before serving in the Temple for the Levites and priests, to make a sacrifice when one had sinned. […]. In part, this ceremonial law explained precisely the sacrificial system’s whole functioning, describing the rites that were to take place in the earthly sanctuary.

The Moral Law in the Bible

The moral law designates the Ten Commandments. They exist since eternity; God does not change (Hebrews 13: 8). He is holy, and he wants a holy people. These laws still apply. They are engraved in our hearts according to the promise that God made in Jeremiah 31: 31-33; Ezekiel 11: 19-20, and Ezekiel 36: 25-27. This is the moral law, the Ten Commandments, a reflection of God’s character.

In the following lines, we will highlight the differences between ceremonial law and morals in the Bible. Several points distinguish ceremonial law from moral law.

1. The Moral Law or the Ten Commandments of God, was proclaimed on Mount Sinai, written on two stone tablets by the hand of God, and handed over to Moses to be placed in the ark of the covenant (Deuteronomy 10: 1-5). The moral law is also called the law of the Lord (Isaiah 5:24). Yet the ceremonial law or the law of Moses, written in a book by Moses’s hand and handed over to the priests to be placed beside the Ark of the Covenant (Deuteronomy 31: 24-26).

5. The moral law consists of moral precepts (Exodus 20: 1-17). But the ceremonial law consists of ceremonial precepts (Hebrews 9:10). Indeed, as we said earlier, the law of Moses explained how to present offerings, celebrate feasts, and so on. This is why it is called ” ceremonial law. ” Meanwhile, the moral law does not speak of ceremonies, nor of the way of presenting the offerings. His integral text, which constitutes the Ten Commandments, is found in two places: in Exodus 20: 1-17 and Deuteronomy 5: 6-21.

6. The moral law cannot be abolished; it was never abolished either by Jesus or by the prophets (Matthew 5: 17-19). Yet, it is abolished as to the ceremonial law (Ephesians 1:15, Ephesians 2:14, 15). Indeed, Christ, by His death on the cross, became the Lamb of God sacrificed for the world’s sins. Thus, the whole sacrificial system of the earthly sanctuary became useless. This is why the veil of the sanctuary was torn at the death of Jesus. On the other hand, Jesus clearly mentioned that He did not come to abolish the moral law, the Ten Commandments, a reflection of the character of God Himself. Christ has always shown great respect for the Ten Commandments. Far from abolishing them, He recommended the observation to all. (Read Matthew 5: 17-18, Matthew 19: 16-19).

8. The Bible teaches us that the moral law makes us happy when we consider it and put it into practice. (James 2: 23, 25). And since the ceremonial law, being “a shadow,” it cannot sanctify entirely (Hebrews 10: 1-4).

13. The Moral Law: It contains the Sabbath, established from the creation, and which must continue to be observed even on the new earth (Isaiah 66: 22, 23). The ceremonial law contains within it the seven ceremonial Sabbaths, more the three trips to Jerusalem each year (Leviticus 23, Deuteronomy 16:16).

14. In the Moral Law, the Sabbath of the fourth commandment remains in force, being “made for man,” that is to say, for humanity. Jesus declares himself the Master. (Luke 4:16, 17, Mark 2:28, Matthew 12: 8). On the other hand, in the ceremonial law: his sabbaths, his feasts, his rites on eating and drinking, and the sacrifices imposed by the ceremonial law being only a “shadow,” were abolished on the cross; their time has come to an end (Ezekiel 45:17, Exodus 12: 8, Colossians 2: 14-17).

The ceremonial law condemned men, subsisted against them until it was destroyed by the death of Jesus on the cross. The ceremonial law was given to explain the sacrificial system that was to be put in place, pending the coming of the Sacrifice par excellence, the Lamb of God, giving His life for the world’s sins. Thus, knowing the moral law, we can know when we sin, and then we ask for the forgiveness of God. What a contrast between the imperfect ceremonial law and the perfect moral law guiding our steps by the power of the Holy Spirit in us!

• There is one point I would like to emphasize, not to confuse people. When we say that the ceremonial law has been abolished, we are more alluding to the law affecting the “ sacrificial system.” Then all that is written in the “law of Moses” should not be rejected because it is not only the ceremonial laws in the mosaic laws, there are also other laws explaining that moral in contexts and practice – so that is actually a development of the Ten Commandments in specific areas. Thus, these mosaic ordinances about moral law have not been abolished. We could mention, among others: homosexuality, incest, rape, occultism … […]

Tithing and the Sabbath Case

I would also like to draw your attention to Tithing and the Sabbath case. Note, moreover, that it was not a Mosaic law, but that it had already been applied, by revelation, by Abraham, or Jacob, prior to the Mosaic Law, just as much as the Sabbath was ordained by God from the World Creation, the beginning of the Exodus, and BEFORE God gives the ten commandments to Sinai, and mostly before Moses writes all the laws, ordinances, precepts … where he also recalls eternal laws!

Consider the following passage from Daniel 9: 4,11: ” I prayed to the LORD my God, and made this confession to him: (…) All Israel transgressed your law, and turned away from hearing your voice. . Then the curses and curses that are written in the law of Moses, the servant of God, are poured out upon us. ”

In this verse alone, we note the presence of the two laws:

First of all, the law of God, which has been transgressed;

Then the law of Moses, containing the curses for Israel in case of disobedience to God’s commandments.

In closing, here is a short verse that summarizes very well the Christian’s view of these two distinct laws, namely the ceremonial law or the moral law:

– The Christian does not have to observe the ceremonial law, which was abolished by the death of Jesus on the cross;

On the other hand, he must keep God’s commandments, which dictate every man’s duty to God and his neighbor.

Articles about the 10 Commandments of God, the Moral Law, the Law of God: