Which One Comes First, the Chicken or the Egg?

The eternal philosophical question, which one comes first, the chicken or the egg, is now supposedly resolved. Scientists have gotten to the bottom of the matter once and for all. 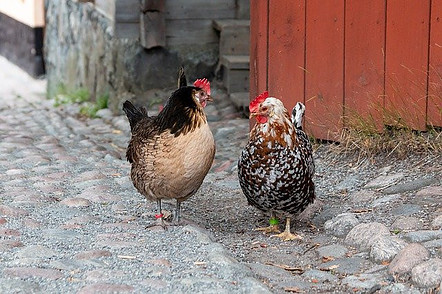 Researchers from two universities in England claim that they have finally come to a solution to the question of what came before – a hen or an egg. And the deal is chicken!

This question could be answered because of the protein ovocledinin-17, as without it, an egg cannot form. This protein is supposed to make sure that the shell develops easily in the chicken at all. It follows, of course, that a hen must have existed first since an egg cannot form without a hen.

The researchers also said that they also got a kind of new insight into the shell formation in addition to revealing this secret. This, of course, can lead to new technologies and materials with the help of this protein. Let’s be surprised.

Let’s Look at the Next Scientist’s Answer to the Question of Which One Comes First, the Chicken or the Egg?

To put it as simply as possible… Many, many years ago, a bird resembled a hen. She was genetically very close to her, but she was not yet the real hen we know today. The scientist Krulwich, who got to the bottom of the matter, calls this form a proto-chicken. So the proto-hen hatched an egg, and the proto-rooster fertilized it. But when their genes came together, a new, different combination emerged. This caused the child to be a kind of mutant, different from his parents. Although it took millennia for a new species to develop from this, the egg was different enough to mark the beginning of a new animal species – the hen as we know it today.

So to sum it up, 2 birds that weren’t really hens created a hen’s egg. And that’s the right answer: the egg was there earlier, and then the first hen hatched from it. However, the dilemma does not really end here, as we can continue the eternal question – what was before, a proto-egg or a proto-hen?

When I read the proofs of how life came into being, what it was before, and the like, I see the mighty fallacies associated with it.

Proofs About the Beginning of Life Are Similar to Proving Which One Comes First, the Chicken or the Egg

The Bible States That First Was the W (W) ORD

Different religions claim their own. Scientists are trying to prove their point, but there are also disagreements between them.

It is interesting how this same bible knows how to say nicely how infinite God is, but in the same breath, he closes him within the limits of some kind of beginning, which in itself means that somewhere there must also be an end. The statement: “First, W (W) ord means precisely these frameworks. Then the second, this third, and so on is placed on the edge of this statement.

All this evidence points to a completely wrong approach to this issue.

Namely, to look for explanations and evidence for the existence of life as primary “energy” (labels are not important), in terms of how it came about, is basically misguided and represents a waste of time and energy.

Talking about it but not actually experiencing it (living) means continuing the confusion and vicious circle of a fruitless search in a limited and measurable world.

So discussions about how it came about, what it was before …, stem from this limited. You are one with this, or you are blind to it. There is no third option.

Which One Is More Right?

When they find nothing, such individuals begin to declare their notions of it to be true. But notions of this reality and reality itself have nothing in common. Therefore, strong notions about God, about the beginning of life…, argue which one is more right.
None.

Once a person is truly revealed what he has neither a beginning nor an end, then he does not talk about it in this way.
Life or God, or love…, has no beginning and therefore no end.
It never came into being, it has always been simple here, and it is the only reality that exists.
This life is forever changing, and every moment is new and unrepeatable.

You cannot enclose this majesty in boundaries or frames and then worship it, for by doing so, you are worshiping completely dead, empty things.
The irony and tragedy are that people around such dead notions of reality have been killing each other throughout our history.