What Is the Meaning of Infinity?

What Is the Meaning of Infinity? 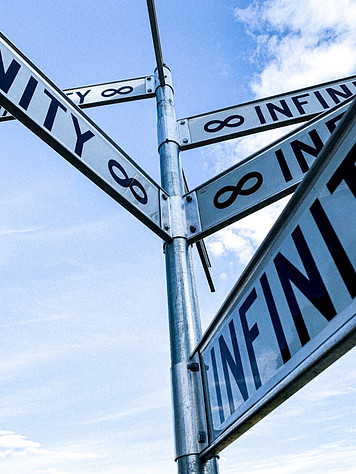 Does the world exist, or does it not exist? I believe that the world exists. If so, is it finite or infinite? The world is infinite. If the world is infinite, the question is what is infinite in it. Is there only one infinity, or are there more? Infinities cannot exist together, because one would exclude the other. Infinity is a quantitative determinant. So if infinities cannot coexist, there is only one infinity, and the question of its nature arises. What is infinity? What Is the Meaning of Infinity?

The whole world, reality, matter as it is called in physics, consists of time, space, and mass. Altogether, it is a matter. Mass is not infinite. We can already see that by the fact that mass stands out from space and, of course, it is something different from what we call time. Is space infinite? Well no. As soon as it is spread, it has parts, and since it is divided, it is, of course, final. So the only infinity that is possible is time, and then we are faced with the enigma of three times. We have a past, a present, and a future. In human understanding, at least it seems so to us, there are three times: past, present, and future. But is that so? The past has passed, the future has not yet come, and our human experience tells us that it is always the present. So the constant present is the only time of physical reality

Are the Past and Future Only an Image?

Let’s deal with the past. What is the past? I look at the stars. The stars are in the present. I, who see them, am also in the present. And then, what is in the past? Image! The image of the stars is in the past. But in what way? The photons of which the image is composed, which therefore represent the structural units of what we call the image, are on every section of the path from the stars to me are also in the present. So the past or what we call the past, what we understand as the past, is just the arrangement of those photons. So the order of the photons in an image that is purely mathematical in nature, extrasensory, invisible in essence, because that is the geometry behind the scene, is not the scene itself. That is the past. So the atomic-molecular structure can never be in the past, just a picture of that structure. Therefore, there is only the present, the past is the order of the photons, not the photons themselves, and the future is the same, but it is the order of the macrosystem.

The Law of Synchronicity for the Electromagnetic Spectrum

The Only Time of Physical Reality Is the Present

The Center of the Universe Is Everywhere

If we understand this space behind as infinity, the question arises where is the center of infinity. Here it is. It is both in you and in me, it is everywhere, it is non-local, it is everywhere because infinity consists only of centers. It has no periphery because it has no border. How many centers have infinity? There are as many as there are natural numbers, so no matter how many, n + 1. There is only one real infinity, it is purely temporal, and that is the universal present. How many infinity centers are there? There is no matter how many of them in coexistence. Infinity consists only of centers because it has no periphery. After all, it has no limit. All the centers of infinity coexist, they exist together at once. If we show the whole infinity as one center, then all its centers fall together and exist at once only as one point.

Democritus believed that worlds do not have to be composed only of small atoms, but can also be of massive atoms through which worlds built of small atoms pass as through empty space.