How man came into being was thought of by people thousands of years ago, so various myths about the origin of man were born. Some myths are downright ridiculous. According to Chinese tradition, the world originated from a Pandu creature, and humans evolved from its fleas. The Maya were convinced that man originated from corn. In East Asian countries, there is a well-established myth that man originated from a cosmic egg. We hear many times that man evolved from a monkey. From which monkey? In the following sentences, you will get to know some of our ancestors. 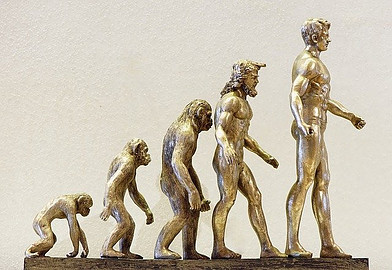 According to experts, the proconsul is one of those primates from which human-like monkeys and humans later developed. He lived 20-25 million years ago in East Africa. He was as big as a chimpanzee, walking on all fours. He ate fruit and leaves. It was a non-specialized form of a monkey, and bone analysis showed it was not a biped, nor was it a typical tree animal.

In India and East Africa, remnants of jaws with teeth similar to those of humans have been found that the bearer of these fossils has been classified as a human.
Ramapitek is, therefore, the first and oldest member of the human family.
The remains of Ramapitek, who lived 14 million years ago, tell us about the earliest period of human formation.

The remains of Australopithecus have been found in southern and eastern Africa, in rocks 4 to 1.5 million years old. From the fossils, we conclude that they walked upright, the hands were not tied to the movement, the shape of the pelvis and the environment is very human, the facial part is reduced, and the brain is enlarged. Because of all these similarities with humans, we place australopithecines in the human family.

Australopithecus was no longer a monkey, nor were humans yet so that they could be labeled as prehuman.

The development of australopithecines took place in several directions. The human genus Homo evolved from the species Australopithecus africanus. Development was largely influenced by climate. 2.5 million years ago, major weather changes began. The forests have shrunk, and the grassy landscape has expanded. The food was scarce and of inferior quality. This encouraged common sense on how to survive and get food more easily.

Simultaneously with the younger forms of australopithecines, 2 million years ago in the savannas of present-day Tanzania and Kenya lived creatures that were already making simple tools. That’s why they called them the Skillful Man. These were no longer pre-humans but the beginnings of the developmental branch of prehistoric people.

The dexterous people were about 1.4 m in size, their brains were better developed than those of Australopithecus, and their teeth’ shape was also different. They fed on meat and plants.

The skillful man was a kind of link between Ramapithecus and the Upright Man.

When Darwin published the book The Origin of Species, he was convinced that transitional forms between ape and man would also be found in the earth’s crust. A supporter of Darwin’s teaching, Ernest Haeckel, gave this creature the name Monkey-Man (Pithecanthropus). More than 20 years after this prediction, the remains of a human monkey were found on the island of Java. Parts of the skull, femur, and teeth were found in 700,000-year-old rocks.

Steinheim man can be classified among our immediate ancestors, who evolved from Pithecanthropus. From such forms, Neanderthals probably evolved in one direction and a thinking man in the other. This man’s remains from the second interglacial period, i.e., from 250 thousand to 200 thousand years ago.

The discovery of the bones of this man in 1860 in Neanderthal greatly disturbed the spirits, as, at that time, there was a belief that nature is immutable. But the bones spoke differently, especially the skull with the low forehead and the bulge above the eye. They thought the changes in the bones caused the disease. It was not until the early 20th century won the correct opinion that people different from today lived in the Ice Age.

Neanderthals are the only human species to have evolved on European territory. They lived 100,000 years ago to 35,000 years ago.

They lived in groups and had simple rituals. They were stocky and strong, about 160 cm tall. They used simple tools, and they made clothes from skins. In the beginning, they lived outdoors, but when the ice age started, they retreated to the caves.

CRO-Magnon Is the Most Modern Origin of Man

Cro-Magnons are considered an early form of modern man. They had a completely human image – a steep forehead, a small and well-developed face. They were tall and of strong limbs. They lived in organized groups. The Cro-Magnons lived during the last glaciation period – 30,000 years ago. They inhabited the Middle East, Europe, and the strain. Africa. The climate at the time was about the same as it is now in the far north. They had sheltered in caves. They made handsome tools and weapons decorated with various patterns. They also made statues and painted on the walls of the caves.

By the time Neanderthals were still inhabiting Europe, modern man was already evolving in Africa. That was 100,000 years ago. 40,000 years ago, modern humans had already settled in Europe. With a more developed culture and reason, they displaced the Neanderthals. It is a culture that has become the foundation that determines which organism will survive and which will not.

When the Neanderthal became extinct, H. sapiens groups spread throughout the territory.

18,000 years ago, it was quite cold, and the glaciers expanded. So the journey across Siberia to the North and J. America stopped. The ancestors of today’s American Indians settled in America 12,000 years ago.

Due to climate change, the human species has changed. For people who lived in colder climates, the skin became lighter. Different races emerged.

Races are groups of people with certain common characteristics such as facial features, body shape, and skin color.

New Findings Regarding the Origin of Man

A new study finds that modern man appeared in the area of present-day northern Botswana, that is, in southern Africa, which challenges the previous findings that the cradle of Homo sapiens in East Africa. However, not all scientists agree with the new findings, criticizing the study for being too narrow.

A New Turning Point: Humanity Does Not Originate in Africa, but Europe

Discoveries that completely change existing beliefs about humanity’s origin and evolution testify to how little science actually knows and understands how we humans came into being and become what we are today.

The latest scientific discovery shows that humanity does not originate from the Black Continent, as we have been taught until now, but from Europe. It is also older than expected, writes The Telegraph.

Forget what you learned in school. The older we are, this sentence applies to the more things that were once pushed in our heads by strict teachers.

This does not mean that we should reject science and knowledge, but that we merely know how to develop doubt and critical judgment into scientific theories and discoveries, which often stand on the shaky feet of ideas and predictions.

The (prehistoric) history of humanity is a typical example of an area where the awareness would not harm scientists (and ourselves) that the most they can say with certainty about our choice is that they know little or practically nothing.

The question is not whether humans separated from the common ancestor monkey in Africa or Europe, but which discovery in the future will turn the theory of the human origin and evolution upside down.

What Does the Bible Say About the Origin of Man?

Does Science Explain Everything?

The evolution of the world and man was spoken of in schools, especially immediately after the war, as a “death blow” to religion because science explained everything about how the world and man came into being. The “tales” of the Bible are against science. Many actually believed these claims and rejected the faith. In reality, however, such learning in schools meant only ignorance of religion and also ignorance of science and evolution itself.
The Bible has no intention of explaining the natural sciences, zoology, biology, or astronomy. It teaches religious truths about the Being who created the world and laid in it all the laws that govern it, the laws of nature. He speaks of God in a simple way that ordinary people could understand in those days. God created the world, all living beings, and also a man. This puts it in the frame of seven days, but these are not 24-hour days, as the sun was only created on the fourth day.

God Is a Spirit and Has No Hands

When he speaks of the first man and says that he made him out of the earth’s soil, it does not mean that he “kneaded” Adam with his own hands, for it is clear from the Bible that God is a spirit and has no hands. It only means that man is made of the same matter as the earth. God could not and did not want to explain to the people of that time how the earth and the universe were made. If he were to say that the earth is round, they would not believe him because they experienced the earth as a surface floating on water, and the water is also above the clouds because otherwise, it could not rain. Salvation does not require the knowledge of all this, but the realization that God is the master of all, the supreme being, the Engineer who designed the world. However, how he did this, we humans discover gradually according to their reason, which he gave us. Today we know a lot about the universe, the earth, the living beings on it, and especially about man. But we also know that there are still so many things we don’t understand, haven’t discovered, and we don’t master. The more we know, the more new questions appear that we don’t know the answers to. We will not find this in the Bible because it is not written to give us answers to such questions, but much more important: where we are from, where we are headed, who is the Lord of all, and why He created us, how we should live, to achieve our goal: a happy life with Him.