Many children ask their parents, “What is the difference between Jesus and Santa Claus? Or: “My friends say Santa does not exist. Does Santa Claus really exist? Do they get honest answers?

Children are encouraged to believe in the myth of Santa Claus, but at one point or another, they realize that this story was invented from scratch. They discover that the big bearded and immortal man in red costume never existed, nor his reindeer and his workshop at the North Pole where elves would work to make the toys. What they derive from this inevitable discovery is the idea that legends are associated with their religious beliefs. After all, Christmas is supposed to be a religious holiday. The myth of Santa Claus is presented as an absolute truth to these malleable young children – before they realize that all this was wrong. Sometimes parents may even steal Santa’s false appearance, for example leaving a glass of milk or half-empty fruit juice. Once the child has learned the truth, he equates the principle that stories involving supernatural forces are probably wrong. Children invariably learn that Santa’s story is an invention – a lie, or even a complex succession of lies. Most of them learn it from an early age.

Children Don’t Recognize the Difference Between Jesus and Santa Claus 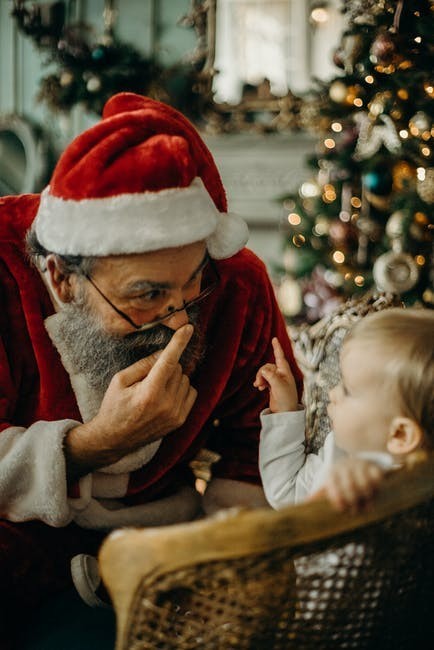 David Kyle Johnson, an adjunct professor of philosophy at King’s College in Pennsylvania, wrote that every child who believes in Santa has a “strong moment” when he or she realizes it was wrong:

“Horrible stories are taking place at this” momentous moment “- stories that the discovery of the truth about Santa is not without consequence – since the erosion of parental authority and trust until to push a child towards atheism. For example, [a boy] defended the existence of Santa Claus in front of his class on the assumption that “his mother could not lie to him”, before reading the article about Santa in an encyclopedia in front of his classmates and to realize at the same time that his mother had actually lied to him. When [a little girl] realized that the reason she did not always get what she wanted from Santa was that it did not exist, she concluded that the best answer she did not get was The answer to his prayers was that God did not exist either. I do not say it happens to all children. I’m just saying it’s a possibility. If you are part of a religion, I doubt that you would wish to provoke this eventuality. Of course, if you’re an atheist, you may like the lie about Santa causes this result “(” Say Goodbye to the Santa Claus Lie “, Psychology Today, December 2012).

It could happen that children don’t recognize the difference between Jesus and Santa Claus. And they deny God just for this reason. Of course, not all children respond well to this “strong moment” and most of them make a reason. But doubt and skepticism learned during childhood can leave traces in adulthood.

On September 21, 1897, the American newspaper New York Sun published a letter sent by an eight-year-old girl named Virginia O’Hanlon, in which she wrote:

I am 8 years old. A few of my friends say that Santa does not exist. Dad said to me, “If it’s in the Sun, then it’s true.” Tell me the truth please: does Santa exist?

It received a famous response in the United States and this story was even the subject of a cartoon on American television in 1974. Here is an excerpt from the response published by the newspaper:

Virginia Your friends are mistaken …

Virginia had undoubtedly been educated by her parents to tell the truth since she asked the newspaper’s editorial staff, “Tell me the truth please …” She asked if Santa Claus existed yes or no. Do you think she received the truth in response? No, Virginia, it was not the truth! There is no doubt that she later discovered the truth about Santa … and the fairies, by the way.

The children can then have the following reasoning: Since Santa Claus and his supernatural powers are a legend, what about the miraculous birth of Jesus? Is it true that angels have announced it? Is it true that the mages have moved? Was there really a star above Bethlehem? Was Jesus really a king? Is there any difference between Jesus and Santa Claus? Will these children wonder if all the miraculous stories in the Bible are legends? When they discover the truth about Santa Claus, they are implicitly told that religious miracles can be myths. A very unfortunate aspect of Santa’s legend is that children learn to believe “on faith”. When this faith is lost, as is invariably the case, it can then create skepticism about religious faith.

Santa does not come down to town, and it is best if the religious faith of the children is based on real facts. Jesus said, addressing God the Father, “Your word is the truth” (John 17:17).

Where does the current Santa Claus legend come from? According to historians, it has developed from several sources over the centuries. In the 4th century AD, a Greek priest from the city of Myre (now in Turkey) named Nicolas was canonized by the Catholic Church. The day celebrated in his honor, the “Saint-Nicolas”, fell on December 6 and this tradition was gradually mixed with the customs of the Christmas Mass at the end of the month.

Before entering the Roman Catholic Church, the Germanic peoples observed the Yule for many generations, a feast falling in the middle of winter. As a result, many Yule traditions were incorporated into the Christmas celebrations. Rome found it useful to “Christianize” many pagan customs so that pagans would be more receptive to Catholic evangelization. It was enough to change the meaning of the day, the moment that the practices and the date in the solar calendar remained the same.

Part of today’s Santa Claus attributes seem to come from an ancient German god, Odin, who was portrayed with a white beard, bringing gifts and crossing the sky.

“The appearance of St. Nicholas, or of Santa Claus coming down on December 25, is very similar to that of Odin, that old Nordic man with a white beard and a blue hood who was giving gifts across the winter sky. on his eight-legged horse, Sleipnir, to distribute gifts to his people […] Odin, transformed into a character of Santa Claus [and] of Saint Nicholas prospered with the feast of the same name, and the child Jesus began to play a leading role in the Christmas celebrations “(Discovering Christmas Customs and Folklore, Margaret Baker, page 62).

“On the night of December 5 to 6, it seems that this ancestor of Santa Claus descends from the sky, not with reindeer, but on his donkey or on a white horse, depending on the country. Like Santa, he sneaks into the fireplace and presents gifts and delicious treats. Some families leave apples or carrots near their shoes for their animals “(” Saint Nicolas, the ancestor of Santa Claus, celebrated in Europe “, Le P’tit Libé, December 2017).

In the Netherlands, St. Nicholas is called Sinterklaas, whose anglicized form gave Santa Claus (the current name of Santa Claus in the English-speaking world). Other countries use the literal name of Santa, such as Papa Noel in Spanish or Baba Krismasi in Swahili. Even Turkey has its version of Santa Claus called Noel Baba. Being a predominantly Muslim country, he brings gifts for the New Year. But the Christian-Christian Turks associate him with Christmas. The character of Santa Claus / Saint Nicholas appears in many cultures and his name is translated into many languages.

The origin of the character is well known, but its current appearance is quite different from that of the Germanic god Odin or Saint Nicholas of the 4th century AD. Where does the present appearance of the corpulent and jovial fellow appear in his red suit? There are three main origins.

On December 23, 1823, the New York newspaper Troy Sentinel published a poem written by Clement Clarke Moore, “It was the night before Christmas” (whose original title was “A visit of St. Nicholas”). He described a jovial and bearded character distributing toys to toddlers from a sleigh pulled by a reindeer in the sky. This representation was close to the German god Odin who gave gifts to children at the time of the winter solstice and who sometimes rode a mythological horse with eight legs in the sky. This poem became very popular in the United States and gave birth to the iconography of modern Saint Nicholas.

Later, verses of this poem were put in images by the illustrator Thomas Nast who drew the character of Saint Nicolas in 1881. This famous drawing represented a corpulent and smiling man, with a white beard, who carried toys for children. This representation caught the imagination of the public.

The image of Santa Claus evolved again under the influence of Coca-Cola’s marketing, which portrayed the image of a handsome man with a white beard, wearing a “Coca-Cola red” costume and holding a soda by hand. This commercial image – and its variants – were widely used in Christmas commercials by dealers. This is the image of Santa Claus that people usually have in mind today. And people no longer recognize the difference between Jesus, Santa Claus, and Coca-Cola.

Is Santa Claus coming down to your city? In a mythological sense, he could be the “patron saint” of traders. But for children, like Virginia O’Hanlon, who would ask, “Tell me the truth please …”, the answer is, “No, he will not come. And besides, he never came. “