Meaning of the Wedding Ring Is Hidden in Its Shape

The meaning of the wedding rings is not only a beautiful and usually expensive ornament on a woman’s or man’s hand, but it is much more. The ring is a symbol of love, unity, and fidelity.

The Symbolic Meaning of the Wedding Ring 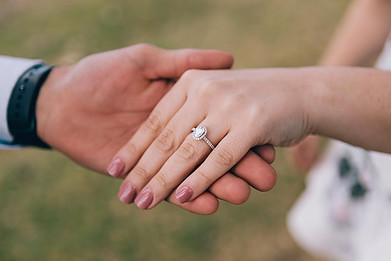 It is the most important symbol of marriage, representing the eternal bond of life and the connected destiny of woman and man. It is made of precious metal to last forever, and a wedding ring is jewelry that is supposed to be worn for a lifetime. The ring is also the only decoration and, at the same time, a visible proof worn by married couples, and in this way, they also show their married status in society. This is also why it has great symbolic significance because people wear it as a symbol of their devotion and commitment to their spouse. The ring represents a strong and endless bond between the spouses. At the same time, it is a lasting and constant reminder of their vow always to be faithful to each other.

Meaning of the Wedding Ring Is Hidden in Its Shape

The ring symbolizes all this because of its shape. The ring is supposed to mean security, strength, dignity. The circle is a shape that has always been considered a mystical form. With the help of the ring, people wanted to protect themselves from all evil. The ring is, therefore, a sign of protection from the forces of evil. The ring must protect the spouse from the dangers to which love is exposed. Because the circle closes in on itself, it is a symbol of unity and perfection, and because it has neither a beginning nor an end, it is also a symbol of eternity. Therefore, in the wedding rings are hidden the hope that the spouses will achieve such a unity that leads to perfection, and that their love will reach eternity.

What Is the History of Wedding Rings?

Wedding rings were already known in Egypt and ancient Rome. Even then, the engagement and wedding ring was worn on the fourth finger of the left hand because, like the ancient Egyptians, Romans also believed that the vein ran from that finger straight to the heart, which is the center of love, all love feelings and emotions. The ring finger is also associated with the Sun and was sometimes called the heart finger, also because of the belief that the ring of the left hand is directly connected to the heart, a symbol of fidelity and love.

Meaning of the Wedding Ring in Christianity​

In Christianity, the ring has the value of a sacrament because it is an expression of the free desire and will of a man and a woman to embark on a common life path. During the wedding ceremony, both at the registry office and in the church, the groom puts the ring on the fourth finger of the left hand of the bride as a symbol of eternal love and confirmation of belonging. The bride does the same. And be careful! If a ring falls to the ground during a ceremony or witnesses accidentally forget about the ring, it is an old belief that there is no real will or desire for marriage—a bad sign to start a common path. And weigh the ring well before choosing it as your own so it won’t be too narrow for you, because that can mean you’ll feel cramped in marriage. When you wear it, be careful not to lose it because it brings misfortune or even divorces into the marriage. Rings are also not borrowed because it brings misfortune to the one who borrows the ring.

You Can Get Married Without a Ring

For all those who do not like to wear jewelry and also not rings, the following information will come in handy. Although nowadays the choice of a wedding ring is something completely normal and expected, the ring is not an obligatory part of the wedding protocol or ceremony (primarily civil). Even without rings on your hand, you can become a husband and wife. So rings are not an essential part of a wedding ceremony, but they are the most important if you opt for it.

An Excellent Book Recommendation on This Topic

In the book under, you’ll find everything you need to know to pick, buy and use … to truly experience the excitement and wonder that should be part of finding–or creating that “perfect” ring.