Most of us think we know everything about Christian wedding customs. Still, many would be surprised at how little we actually know about the history of some events and why a particular event is performed so traditionally. Marriage is a solemn act held in the Church, and by this rite, the spouses (man and woman) become officially married. 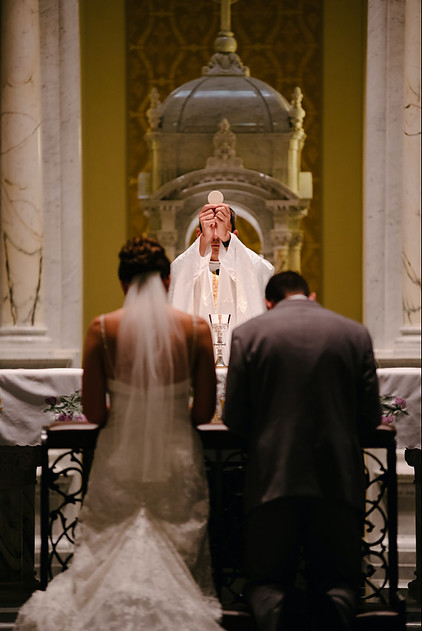 The sacrament of marriage is a sacrament in many Christian communities or among people who have been baptized. For a church marriage, the person must have performed all other church sacraments, such as baptism and confirmation. I could define that marriage is a contract between two people directed towards living together. According to the Catholic Church, marriage is established by God and then unique. What God puts together, no one can set apart. A church marriage is performed before a priest in the Church, and persons who marry should enter into marriage out of love and their own free will.

Spouses should enter the marital community clean that means without sexual intercourse before marriage. However, in today’s modern society, it can be seen many times that women are in a particular stage of pregnancy when they get married. Before the church wedding, the couple goes to a course for future newlyweds where they listen to lectures on marriage, sexual intercourse, conception, cohabitation, and respect in marriage by priests and other professionals. A church marriage can only be validly dissolved in certain and justified situations, such as sexual impotence, the previous marriage of one person or a different religion, or when one person has not been baptized. It is important to note that in the case of diversity of religions, the Church grants ecclesiastical forgiveness, after which marriage is possible. Each of the spouses in the Church has his or her own witness, ie, the best man or godmother.

In the wedding ceremony itself, some traditional Christian wedding customs have persisted to this day. Some of them are no longer implemented, some have changed a bit, and some have entirely disappeared. Depending on the county and region of the country, there are differences in the act itself, from the number of people at wedding ceremonies to regular traditional customs.

Before the wedding itself, the future newlyweds go through the act of engagement. Engagements can be defined as the pre-wedding ceremony phase. The engagement ring is most often worn on the left hand and shows respect for the partner we have chosen.

Delivery of the Bride

According to our tradition, the bride is brought to the altar by her father. If the bride does not have a father, it is a brother, godfather or relative, or a male family member. This tradition originates from the ordinances of the English colonies and signifies the inviolability and honor of the girl who marries.

Joint Entry Into the Church

Future spouses should enter the Church together so that neither of them would be in the foreground.

After the priest officially declares the future spouses to be a married couple, the groom is free to kiss the bride. This scene is exceptionally romantic and delights guests. The priest blesses the rings that the spouse’s exchange for each other.

Throwing Rice After Leaving the Church

Many couples in recent times have a tradition of throwing rice after leaving the Church. According to Christian rule, throwing rice is a pagan ritual where rice that is food is thrown away, and throwing food is a sin. Since rice is native to China and represents a fertile food, it is believed that throwing rice at newlyweds should symbolize the fertility and health of the children of a married couple. Since rice is the food, it is recommended to throw away papers or flowers.

The ritual of a Christian wedding in the Church is followed by a celebration for all the guests. A wedding cake is eaten, a music band plays in honor of the newlyweds, the first wedding dance is danced, and guests enjoy music and merriment until the early hours of the morning.

Every engaged couple wants two things: a lifetime of happiness and a meaningful wedding. This great gift book is a cross-cultural collection of marriage folklore that will help you achieve both.