How Is the Universe Made?

This time we will try to answer the question of what is the world we live in and how is the universe made. Religions are telling us that there is not only one dimension that exists, but there are also several. Our life or our existence does not start with birth and does not end with death. There is an eternal essence called a soul. Some say that after the incarnation in this manifested world, it goes to heaven or hell. The concepts are different because religions are culturally determined. In the world of philosophy, there had appeared a path called metaphysics, which tried to explain our multidimensional existence in a philosophic sense and make it closer to us. The father of metaphysics is Aristotle. In metaphysics as in religion, it is about several dimensions of being. In fact, classical metaphysics talks about nine dimensions with our manifested world being the third dimension. 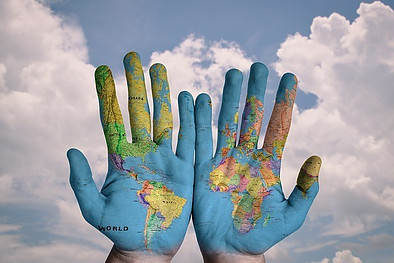 How Is the Universe Made from Metaphysics and Religion Perspective?

So if God is a creative force then people who are similar to God or are a part of him, also possess such a creative power that can influence the world we live in. The original Christianity probably had the same view on creation and God. Christianity teaches that God had created man in his image. What does that mean? Of course, it does not mean that there is a man with a beard sitting somewhere out there, looking like us. God is consciousness, and we are also consciousness.

Consciousness Created Everything That Exists

God can create, so do we. On these basics, a new view on the creation of the universe has emerged. We call it idealism, which explains how is the universe made in its manner. It consists of what I was talking about. First, there was consciousness, which created everything that exists out of tiny pieces of matter. We could say that we can divide creation into tiny material bits called atoms, from which everything is made, and an intelligent, creative force, certain fields which made the creation happen. Quantum physics supports the concept that everything evolves from consciousness. In metaphysics, everything is supposed to derive from the emptiness, which in quantum physics is called a physical vacuum. They had discovered that in this physical vacuum, there is a lot of energy. They call it zero-point energy. A question of how to use that energy emerged. How could a man get in contact with it? On a subconscious level, a human knows how to get it. Maybe you have noticed when you come home really tired, what do you do? You sit somewhere, and you gaze into an empty space. The energy is in that empty space. When you concentrate on anything material you lose energy, we gain energy when we get in contact with an empty space.

Past, Present, and Future Exists in the Current Time

We detect that energy world with different senses. Subliminal perception and intuition. What is that? Subliminal perception is our ability to feel the energies. It can be developed. All the perceptions are working all the time. However, we are oriented so much on the material world, because we are not aware of the energy one, that we only feel what our senses are communicating to us. Quantum physics is teaching us something very interesting. Quantum physics has, in a way, dealing with time. It sounds pretty crazy what they say, that everything, past present, and future, exists in the present time. However, when we become attentive to a certain situation we give it energy, so it becomes alive, it starts going on in a certain FRAME? It sounds a bit incomprehensible, so I will explain it with another example. Let’s say we have a storage of film tapes. On these tapes, there are different stories at different times. When we take one tape and put it in a film projector, that story starts happening in a certain limited-time reality. The screenplay is known, even in life.

Focus on Within an Empty Space

If we are concentrated all the time on the material objects, the screenplay is known, we can not change much. However, we said that everything evolves from the emptiness in which there are all the other possibilities. There is the key. We have to put our attention into the emptiness to get to that other possibilities and to become like God. If in the real world we are concentrated all the time on some news, situations that are happening to us there is less and less consciousness in us. If our focus is within an empty space, we are connected to God. Let us imagine that we are a cloud; when you focus on an energy world, you become the whole sky. We, of course, want to know how to make certain changes with these discoveries. Let’s take a look at some examples from the first show when I said for instance – a man comes, and he is aggressive. You look at him, acknowledging who he is – an aggressive man. What to do so that he stops being aggressive?

Focus Your Attention on the Energy World

We can change our focus. If in the manifested reality in the universe as it seems to be, our energy is oriented onto something real, it confirms what it is, however, in the energy world, there is another rule. When you focus your attention on the energy world, it is starting to change. So what do I have to do? When an aggressive man steps to you, you have to keep cool, be totally calm, and focus your gaze on him. What do I mean by looking into him? For example, if my focus is now on the fingers of my hand; then I put a crystal beside them wanting to have a focus inside the crystal. Now I am focused on my hand, then I just move my head a little and keep the focus, looking into the crystal. When looking into the crystal, I am automatically changing its energy. If I use adequate intention, I can clean the crystal that way or activate it. You can try it in everyday life.

When someone wants to get in a fight with you, don’t answer him, be quiet, stay calm, and just look into him. You will see how fast he will stop. We should work with patients similarly. If you treat someone as a patient, you are confirming what he is. If our focus is on the patient, and we keep completely calm, neutral, the energy inside him begins to put in order; he begins to heal. Anyway, what to do not to lose energy? We were just talking about focusing on an object or a person when we try to change him. It seems a little selfish, but the point is in being completely calm, neutral, empty inside. When we are empty inside, looking at someone, it is like sending him universal energy. In that universal energy, there is no room for aggression and things like that. So he calms down. That is not manipulation. A trick on how not to lose energy? It is very easy to learn; it just takes some perseverance and practice.

You Can See the Aura

Everything I look at, I look at it in a way to keep a focus a little bit in front of the object or a person. So you learn to have a focus here. Sometimes you may see an object or a person a little blurry. It is interesting that in those cases you can many times spontaneously see the aura, that energy reflection around people. That way we won’t lose our energy; that way we connect to a source of universal energy, we are not dependent on anyone else, we don’t have to steal it. What else? If we are all connected with universal energy, what will spontaneously start happening? We will start to change if we frequently keep focus within emptiness.

A Conditional Mind Finds It Hard to Forgive

We will start to feel connected with others. It will be a lot easier to forgive. A conditional mind, a mind in the world as it seems to be, is thinking this way: aha, if someone did something bad to me, he must be punished. A conditional mind finds it hard to forgive. When you start functioning through the emptiness and spontaneously, you feel the ability to forgive.

Inside of Us Will Be Created a Wave of Energy Changes

Furthermore, something else is also interesting. How to make some things happen with an intention? If you look at someone neutrally, it will start to create universal energy inside of him. But we do not like certain things and would like to change them, working with an intention. How does that work? At first, we have to be aware of the energies which we would like to change. Firstly we have to develop a subliminal perception. We said it is a perception about feeling the energies. Anytime we are focused on an empty space wanting to change something in something or someone and say in our mind or aloud an intention, inside of us will be created a wave of energy changes.

We Are the Sky Where Everything Is Possible

If we want that intention to become real, we have to be aware of those changes. In RADIESTESY these changes are shown by the oscillation of a pendulum. It is simpler to be aware of these changes inside of yourself. Maybe I have to mention another thing about an empty space. When we are focused on the objects, we are in a world of rules. Within the bounds of our concepts, we also encounter: What is possible? What is impossible? For instance, as it takes some time for a disease to develop it also takes time to heal. We also know about momentum healings and maybe say it is an exception to the rule. If our focus is within an empty space, all the rules are off. We are no longer a cloud full of rules; we are the sky where everything is possible. That is when we can do things that are supposed to be impossible.