Symptoms of Urticaria and Its Signs, Causes, and Prevention

15 to 20% of the population has at least one acute urticaria outbreak during their lifetime. For nearly 1% of the people, the urticaria will become chronic. So it’s not wrong to know everything about causes, prevention, signs, and symptoms of urticaria. This article will try to answer part of these questions.

Urticaria is an inflammatory dermatosis marked by dermal edema (superficial urticaria) or dermo-hypodermic (deep urticaria). The superficial form is the most common. It is expressed by an erythematous and papular rash whose lesions are typically fugitive, migratory, and pruriginous. The diagnosis is clinical.

Urticaria is most often acute, the chronic form being defined by an evolution superior to six weeks. The main causes of acute urticaria are food or viral. The majority of chronic urticaria is of unknown cause (idiopathic).

Management may include symptomatic treatment, primarily antihistamine for superficial urticaria, and treatment of the cause whenever possible.

I – What Are the Signs and Symptoms of Urticaria? 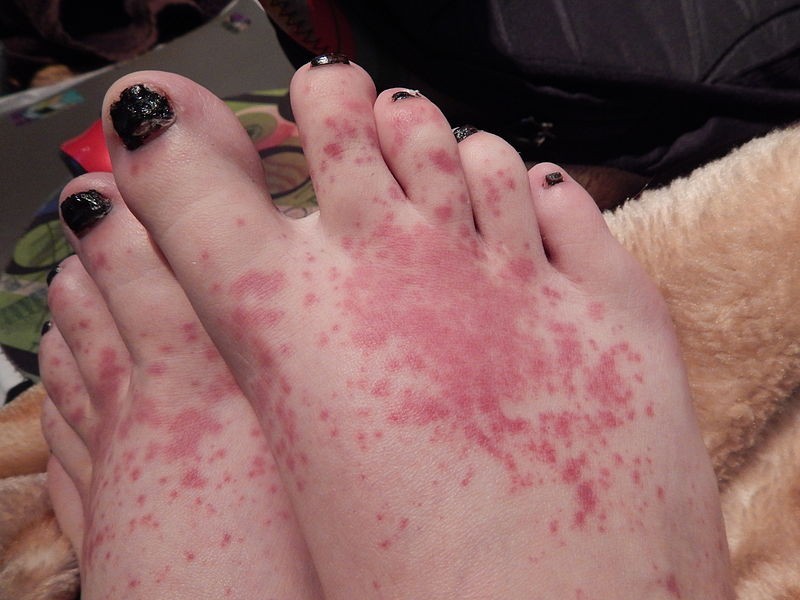 Urticaria is a rash that is characterized by itching and the appearance of raised red patches (“papules”), which resemble stinging nettles (the word urticaria comes from the Latin urtica, which means nettle). Urticaria is a symptom rather than a disease, and its causes are multiple. We distinguish :

– acute urticaria, which is manifested by one or more outbreaks for a few minutes to a few hours (and may reappear for several days), but evolving for less than 6 weeks;

In short, urticaria is a skin disease that is manifested by a sudden rash of plaques, also called papules, that is comparable to stinging nettles.

The rash usually affects the surface of the skin. These papules, localized or generalized, are red or pink, rounded, raised, and well defined. They can cause intense itching. They are fleeting because each element appears and disappears in less than 24 hours.

The urticaria can also extend deep into the skin and touch the face, hands, feet, genitals, or mucous membranes. The lesions take on a different appearance: they are more blistered or oedematous and the redness is less intense. These swellings cause a feeling of tension and are painful. This is called angioedema, commonly called angioedema.

Urticaria has a significant impact on social, personal, and professional life hence the need to be oriented to the right interlocutors for appropriate care. Indeed, the physical manifestations (plaques, redness, itching, edema) can affect daily life by the physical discomfort but also by their visible character.

We distinguish two types of urticaria according to the duration of evolution, fixed arbitrarily at 6 weeks: acute urticaria and chronic urticaria.

Acute urticaria results in a flare that progresses for less than 6 weeks. This is most often a single episode. Acute urticaria appears and disappears suddenly.

The mechanism of acute urticaria is:

– Either allergic: it is due to specific IgE. The reaction is rapid and abrupt after exposure to the allergen.

– Either non-allergic, due to histamine release nonspecifically, or following an external supply of substances rich in histamine (food-based).

An interrogation can lead to a drug or food cause and will determine if there is a real allergy or if it is rather an intolerance.

Chronic urticaria is characterized by daily lesions or recurrent relapses that have been evolving for more than 6 weeks.

There are two types of chronic urticaria, depending on whether the signs and symptoms of urticaria are triggered indiscriminately or spontaneously:

– Chronic inducible urticaria: one (or more) specific triggering factor is identified as the cause.

– Spontaneous chronic urticaria: no specific triggering factor is identified. This form of hives affects twice as many women as men.

In the majority of cases, chronic urticaria is idiopathic (with no identified cause). Moreover, it is often linked to a conjunction of factors.

III – The Causes of Urticaria

The mast cell, present in the skin and the mucous membranes, is the cell with the main role in the occurrence of urticaria. The mast cell delivers a “danger” signal after activation of one or more of its many membrane receptors. This stimulation triggers degranulation of the mast cell, that is to say, the release of the contents of its granules, in particular, the release of histamine. Anyone who is intensely exposed to these signals will normally have mast cell activation, leading to degranulation and, potentially, urticaria.

Urticaria is due, in the vast majority of cases, to the “fragility” of mast cells. This is dependent on individual susceptibility. Mast cells are more reactive and will burst spontaneously or under the influence of so-called “histamino-liberating” substances, such as:

– infections: the urticaria can be secondary to a viral, bacterial, or parasitic infection.

2 – Urticaria, Not Always Related to an Allergy

Despite conventional wisdom, urticaria is not always linked to an allergy. Indeed, it is a rare cause of acute urticaria and is almost never observed in chronic urticaria. Allergic urticaria is a true hypersensitivity reaction to a particular protein. It is mediated by antibodies called immunoglobulin E (IgE) directed against food or a drug. Mast cells activated by immunoglobulin E will release substances like histamine that will trigger the rash. There will be no difference in clinical appearance between allergic and non-allergic plaque urticaria.

Urticaria can also have a “physical” origin. Urticaria appears most often within minutes of stimulation and disappears quickly when it stops. Among the most common forms of this urticaria, there are:

– Dermographism: it is urticaria that appears on a skin area subjected to simple friction, tight clothing, electric hair removal, etc. The plates then retrace the path of the friction.

– Cholinergic urticaria: this urticaria is also called stress urticaria. This form is triggered by an increase in body temperature, following an effort, stress, a hot shower, a digestive stimulus (ingestion of hot or spicy food), etc. It is manifested by numerous small lesions mainly on the thorax but sometimes disseminated throughout the body with the exception, most often, of the face.

– Cold urticaria: this is urticaria triggered by low temperatures or a large and rapid drop in temperature: for example, when swimming in the sea, during consumption of cold foods or drinks during inclement weather (in this case touching the face and hands).

– Urticaria delayed to the pressure: this form appears on pressure zones, with a delay of several hours: on the shoulders when wearing a backpack, at the level of a palm of the hand in case of handling prolonged by a tool … It is manifested by painful edema that sometimes takes several days to disappear.

4 – Urticaria, in the Context of Pathologies

Some diseases are associated with the occurrence of urticaria:

– Autoimmune diseases: these are diseases in which there is the production of antibodies directed against elements of one’s own organism. These diseases are sometimes associated with outbreaks of urticaria (for example, certain diseases of the thyroid).

– Atopic terrain, that is to say, a genetic predisposition can promote urticaria.

IV – Signs and Symptoms of Urticaria Crisis and People at Risk

Urticaria results in the occurrence of:

– papules in relief, resembling stinging nettle, dew or red, of variable size (a few millimeters to several centimeters), appearing most often on the arms, the legs, or the trunk;

– In some cases, swelling or edema (angioedema), especially affecting the face or extremities.

Typically, the urticaria lesions are fleeting (they last from a few minutes to a few hours) and disappear spontaneously without leaving any scars. However, other lesions can take over and the crisis can persist for several days.

In some cases, other signs and symptoms of urticaria are associated:

Anyone can be prone to hives, but some factors or diseases can make it happen.

– the female sex (women are more frequently affected than men);

– genetic factors: in some cases, manifestations occur in infants or young children, and there are several cases of urticaria in the family (cold family urticaria, Mückle syndrome, and Wells);

– blood abnormalities (cryoglobulinemia, for example) or a deficiency of certain enzymes (C1-esterase, in particular);

– certain systemic diseases (such as autoimmune thyroiditis, connective tissue disease, lupus, lymphoma). About 1% of chronic urticaria is associated with systemic disease; there are other signs and symptoms of urticaria.

Who is affected by hives? Everyone can be touched. It is estimated that at least 20% of people have acute urticaria at least once in their lives, with women being more often concerned than men.

In contrast, chronic urticaria is rarer. It concerns 1 to 5% of the population.

The diagnosis of urticaria is essentially based on an examination and a clinical examination, performed by a doctor.

The interview should be used to search for a history of urticaria or autoimmune disease, personal or family. It must make it possible to specify the factors responsible for the outbreak of urticaria and to highlight physical urticaria.

If the interrogation leads to a drug or food cause, an allergic assessment can be done to determine if there is a real allergy or if it is a mechanism of intolerance. Finally, if the urticaria is resistant to well-managed antihistamine treatment, a more thorough examination will be needed to identify whether it is chronic urticaria or not.

The clinical examination will focus on differentiating simple urticaria from systemic urticaria, also called urticarial vasculitis (inflammation of the vessels). Systemic disease may only occur secondarily to urticaria. This urticaria is characterized by fixed lesions lasting more than 24 hours, which are not very itchy.

The clinical examination also makes it possible to ensure the absence of an autoimmune disease, which will then require adapted complementary assessments.

It may also be supplemented by physical tests (hot, cold, pressure …) to confirm or not the diagnosis of physical urticaria.

Acute urticaria, more often than not a single episode, does not require further exploration.

The management of urticaria is based on:

– the relief of the patients (edema, pruritus),

– The treatment of the cause, when there is one (infection, systemic disease, etc.),

Urticaria is little improved by local treatments (creams or ointments). Standard-dose antihistamine therapy is the first-line treatment, that is, the standard of care. Antihistamines work by blocking the action of histamine, the compound released by the body during outbreaks of urticaria. There are first-generation antihistamines, very effective but often have a sedative effect, and those of second-generation are less sedative.

In the treatment of acute urticaria, treatment should be taken for a few days until the rash is cured. Chronic urticaria should begin by removing potentially triggering or aggravating factors such as drugs, foods and starting antihistamine therapy. It must be conducted in monotherapy for 3 months. In the event of treatment failure, despite good therapeutic compliance, an assessment should be made to identify an underlying disease. In case of negative balance, it will be possible to set up a dual therapy, combining two antihistamines (a second generation in the morning, and a first-generation in the evening) or try to change the antihistamine for a period of 3 months. Finally, for resistant forms, the decision may be made to take other drugs: antileukotrienes, dapsone, colchicine, immunosuppressants, etc.

In all cases, taking corticosteroids (even at low doses) should be avoided because, despite a spectacular effect on itching and edema, a “rebound” is often observed when treatment is stopped. This leads to intermittent but prolonged use, which may be responsible for a cortico-dependence: the urticaria worsens and resists treatment.

VII – The Prevention of Urticaria

The prevention of urticaria involves the suppression of the cause, whether it is of physical origin, or related to a substance (drug, food, plant, chemical …).

In the case of chronic urticaria, measures are needed to limit its severity.

– Avoid taking drugs such as aspirin for example,

– To limit the temperature of the shower or the jets of water too strong,

– Learn to manage stress. Stress is an important player in this disease, capable of generating outbreaks of urticaria.

In any case, do not hesitate to consult a doctor.