In this article, we propose a list of the 10 most contagious diseases. A contagious disease is a disease that is transmitted from one human being to another. In other words, an infectious disease is caused by the transmission of a virus, bacteria, or parasite from one individual to another. It can be mild or severe depending on its type. This can be done directly: droplets contained in cough (as in colds or flu), unwashed hands (for gastroenteritis)…

So let’s start with a list of the 10 most contagious diseases. 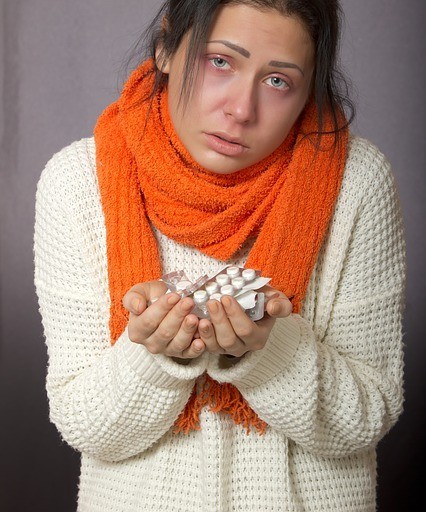 1 – The Flu – the First of 10 Most Contagious Diseases

Influenza is a viral infectious disease caused by a single virus called “myxovirus influenzae” or “influenzavirus”, which usually appears in winter. It is a common life-threatening viral infection, especially for high-risk groups. The flu spreads easily.

The flu attacks the lungs, nose, and throat. Infants, the elderly, pregnant women, and people with chronic illnesses or weakened immune systems are at high risk.

The Symptoms of the Flu

It usually results in chills, fever, headaches, and body aches.

Flu treatment consists primarily of resting and rehydrating to allow the body to fight the infection itself. Non-prescription anti-inflammatory pain relievers can help relieve symptoms. An annual vaccine can also prevent influenza and limit complications.

It is transmitted from one individual to another:

– By droplets suspended in the air (coughing, sneezing).

HIV causes AIDS and interferes with the body’s ability to fight infections. It spreads through sexual contact generally. The disease is transmitted sexually, through the bloodstream, and from mother to child. Regarding its chronicle, it can last several years or even the whole life. We can conclude that it is the most permanent and dangerous among the 10 most contagious diseases.

In the case of HIV infection, the symptoms that appear in the first weeks are similar to those of the flu (fever, sore throat, and fatigue). In general, the disease is then asymptomatic until it progresses to AIDS. The symptoms of AIDS are weight loss, fever or night sweats, fatigue, and recurrent infections.

There is no cure for AIDS, but strict adherence to antiretroviral therapy can significantly slow the progression of the disease and prevent secondary infections and complications.

Rhinopharyngitis or colds or nasopharyngitis is a common viral infection that affects the nose and throat. It spreads easily.

Rhinopharyngitis, more commonly known as the “common cold”, is a common and generally benign upper respiratory tract infection caused by several viruses. It is experiencing a peak of the epidemic in autumn and winter and particularly affects young children.

Unlike the flu, the common cold can be caused by many different types of viruses. The infection is usually mild and symptoms usually disappear within two weeks.

The most common symptoms are sneezing, runny nose (runny nose), fever and sore throat, and congestion.

In case of severe fever or severe symptoms, especially in children, consult a doctor.

More than 100 viruses can cause it. They are transmitted :

– By contact with a contaminated surface (cover, door handle)

Hepatitis B is a serious liver infection caused by the hepatitis B virus, which can be easily prevented by a vaccine. It spreads through sexual contact generally. This disease most often results from exposure to infected body fluids.

Hepatitis B is viral hepatitis due to infection with the hepatitis B virus. It results in inflammation of the liver via hepatocytes that multiply there. Although hepatitis B is treatable (a vaccine exists), it can be fatal in some cases. This is called fulgurant hepatitis. It is spread through sexual intercourse, risky blood transfusions, childbirth, or close contact with an infected person.

Symptoms of Hepatitis B

Symptoms vary and manifest as yellowing of the eyes, abdominal pain, and dark urine. Some people, especially children, do not feel any symptoms. In chronic cases, hepatocellular insufficiency, cancer or marks may appear.

The disease often goes away on its own. Chronic cases must be treated medically and may require a liver transplant.

The human papillomavirus is a sexually transmitted disease that infects the genital mucosa. There are more than a hundred. While most papillomaviruses remain mostly benign, others evolve into cancer. Moreover, more than 99% of cervical cancers are due to papillomavirus.

Mononucleosis is a disease caused by a virus of the family of herpes called the “Epstein-Barr virus”. It is transmitted mainly through saliva, through direct intimate contact, hence its nickname “kissing disease”. It occurs asymptomatically at an early age in some individuals.

The latter are thus immunized without having been contaminated. For others, the risk of getting mononucleosis is increases in the teenage period. Infectious mononucleosis mainly affects adolescents and young adults, but it can also affect children.

Symptoms, Treatment, and Mode of Propaganda of Mononucleosis

The symptoms are fatigue, fever, rashes, and swollen glands. Older people may not have typical symptoms.

As a mode of propagation, let us note the saliva.

Provoked by the virus called “varicella-zoster”, chickenpox is an infectious viral disease that affects, in 90% of cases, children under 10 years. It results in a sudden and brutal eruption of vesicles (pimples, bubbles, redness) on the skin and the mucous membranes.

Transmission is by the respiratory route, by contaminated droplets, or by direct contact with skin lesions. A person with chickenpox is contagious 24 to 48 hours before the onset of symptoms and for about a week (until the vesicles are dry and crust).

It is an extremely contagious viral infection, which causes an itchy rash characterized by small blisters.

The most characteristic symptoms are skin rashes, similar to small, itchy blisters.

There is a vaccine against chickenpox. Treatment of the disease includes relieving symptoms and, for high-risk groups, taking antivirals.

– By contact with a contaminated surface (cover, door handle)

Strep throat or tonsillitis is the most common bacterial infection that causes sore throats. … It is called “streptococcal” because it is caused by bacteria in the streptococcus group A (SGA) and some doctors talk about SGA throat infection.

It results in inflammation of both oval mucous membranes at the back of the throat.

Strep throat is a bacterial and contagious infection caused by strep. It is characterized by sore throat, fever, and body aches. Although it is less common than white-tailed angina, it carries risks of higher complications such as heart attack, kidney inflammation, or arthritis, for example. It is transmitted by contact with saliva and respiratory secretions.

Angina is usually caused by a viral infection but can come from a bacterial infection.

Symptoms and Treatment of Angina

The virus is transmitted through contact with contaminated blood, for example by sharing needles or using non-sterile tattooing equipment.

Symptoms and Treatment of Hepatitis C

Most cases do not show symptoms. Symptoms may include fatigue, nausea, loss of appetite, and yellowing of the eyes and skin.

Hepatitis C is treated with antiviral drugs. In some people, the latest drugs can eradicate the virus.

10 – Cytomegalovirus – The last of 10 most contagious diseases

Cytomegalovirus (or CMV) is a virus that causes mostly unnoticed infections. Its pathogenicity occurs mainly in patients whose immune defenses have been weakened, such as those treated by immunosuppressors, affected by AIDS, and fetuses.

It is spread by contact with secretions containing the virus (saliva, sexual intercourse, or deposit on the hands of contaminated droplets).

Like mononucleosis, cytomegalovirus belongs to the family of herpes viruses and is characterized by benign but latent and persistent infections.

Its main symptoms are similar to those of mononucleosis with fever (with or without chills), fatigue, headache, weight loss, muscle pain, or pharyngitis …

In a Conclusion on the 10 Most Contagious Diseases

Contagious diseases are caused by viruses, bacteria, parasites, or other fungi. Depending on the mode of transmission, they are more or less contagious. Depending on the germs, they can be transmitted by saliva, rhino-pharyngeal secretions, sputum, urine, cutaneous or mucous lesions, blood, and sexual secretions.

In addition, transmission can be direct or interhuman (measles, whooping cough …), or from animals to humans (rabies for example). It can also be indirect, via water, food, objects, etc. Contamination is all the more frequent that the germ is present in large quantities in the environment (nasopharyngitis virus for example) and it is done by simple proximity (postilions, saliva).