What Does It Mean to Love Your Neighbor as Yourself?

What does it mean to love your neighbor as yourself? It means loving God through one’s neighbor. What does it mean in this concept that the Lord is our God, the only Lord? Love the Lord your God with all your heart, with all your soul, and with all your strength (Deuteronomy 64-9). This is a fundamental Old Testament commandment of love for God that was given to the Jews in order to preserve it throughout history and pass it on to posterity. These lines are at the same time the initial part of the Jewish prayer, which is prayed in the morning and in the evening. In order for the Jews to always and everywhere remember the essence of their faith, the prayer form, written on parchment, was kept in a small box, which was tied with a leather strap to the forearm and forehead.

What Does It Mean to Love Your Neighbor as Yourself? 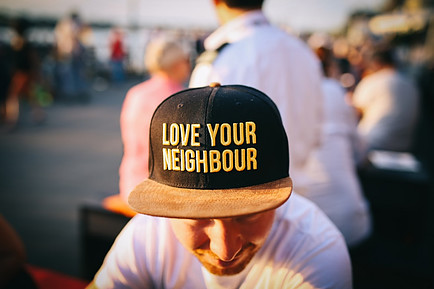 Jesus was well aware of the dangers of believing in the “one God,” which in the minds of many people often ceases to be the God of Abraham, Isaac, and Jacob, but is only a construct of personal delusions and desires. The vertical, man – God, characteristic of the Old Testament, was crossed by Jesus with the horizontal, man – man. He placed the love of neighbor alongside the love of God. From this arose a whole new understanding of love. And in short, this is what does it mean to love your neighbor as yourself. According to Jesus’ teaching and example, the starting point of love is always close. He is the one calling me, I have to answer him. And how do I ascend to God in answering my neighbor? We must keep in mind that sin, conceit, greed, impurity, envy, greed, anger, laziness, etc., reside within us. Because of the state of sin that resides in every cell of our being, we answer our neighbor or not, we answer right or wrong as we can and as we see fit. The motive and strength to respond to our neighbor are always insufficient in us, even when it comes to responding to our own child, who means everything to us, or to the spouse with whom we want to be one soul. The absolute motive and power to respond to one’s neighbor, to show love, therefore, comes from God, who alone loves unconditionally, for God “so loved the world that he gave his only begotten Son, that whosoever believeth in him should not perish, but had eternal life ”(Jh 3:16).

You Have to Serve a Concrete Neighbor

Idealistic monotheism, when faith in God is only a disguise for egocentrism, is effectively corrected only if we serve a concrete neighbor. This is exactly what St. Paul wanted to say. John Paul II at the beginning of his pontificate with the circular Redemptor hominis. Christ according to John Paul II. it is not the savior of humanity that politicians have before their eyes when they make political programs, but Christ is the savior of man, the concrete person in his vulnerability.

Just what Jesus said about love is enough to see the connection between faith in God and love of neighbor, and living love, everything else is an addition that may be interesting but not mandatory.

The statement, the Lord is the only one, does not only mean that the God of Israel is the only one whom the Jews are allowed to worship but above all that they should not worship other gods because they are idols, merely a product of human imagination. Pagan deities do not have their essence, therefore they do not exist, they are only a reflection of the disorder that reigns in every individual after sin, as well as in the relations between peoples and nations, in the economy and culture. The pagan gods are capricious and unreliable, just as we are capricious and unreliable people we have imagined those Gods.

According to Plato – There Is Only One Being

Such a conception of the gods was already rejected by Plato. He was critical of the famous Hesiod Theogony, a poem comprising more than a thousand verses in hexameters and systematically citing the Greek gods and their genealogy. In contrast to Hesiod, Plato emphasizes in several places that there is only one Being, who is Beautiful, Good, Great, and everything else. With this insight, Plato came very close to the image of God revealed in the Bible.

It is not difficult to understand that polytheism does not allow for serious religiosity and ethics. Man cannot rely on unpredictable gods. He never knows when they will be in favor of him, or when they will execute him. There are no transparent rules in the pagan religious framework that would ensure any consistency.

Monotheism Can Also Be Dangerous

It is less understandable, however, why monotheism, faith in the one and only God, can also be dangerous. The ambiguity of faith in a single God has repeatedly shown its negative face in Israeli history. All the kings of Israel recognized the religion of Shema Israel! “Hear, O Israel: The Lord is our God, the only Lord.” Yet many of them killed the prophets and oppressed and exploited the poor. How did these kings reconcile faith in one God in their conscience with their violent and unjust conduct? In fact, without major problems, but not only they, but all those believers in the one God who has ever in history replaced faith in one God with the idea of one God.

The Notion of God Is Only an Abstract Idea

We need to distinguish between faith in God the Father and the notion of God, which is only an abstract idea. These two are not easy to differentiate for anyone; we both like to mix. When God is the Father for us, and when only the idea, it also depends on how we adapt the concept of God to our needs. This shows all our inconsistency of belief. When we are in trouble, we kneel and ask for mercy. But when we defend our right and our truth, we like to refer to the eternal absolute truth, which is no longer the Father, but an abstract construct, merely a product of our mind. God, as an idea, is only a tool for asserting our authority and dominance over others. And here lies the trap: for what is created in our mind is close to us, it is so ours and fused with us that it becomes the object of our love. From here, however, not even a step is needed to transform the absolute love of God into absolute love of self. When the idea of ​​God is only our mental formation, we get, instead of absolute and unconditional love for God, absolute love for ourselves. In other words, we call this idealism. An idealist is a man who loves his idea and not a philanthropist, as we usually think.

The Love of Self Has Tremendous Power

When God is only a projection of our superlatives crammed into an absolute idea, we can, in the belief that we love God, even though we love ourselves, do things that are in total opposition to God’s will. The love of God, transformed into the love of self, has tremendous power. It is characteristic of all idealists in the history of humankind. These are fundamentalists of all colors, creators of totalitarian social concepts, hardliners who, from one center in their mind, regulate the world around them. Let us repeat once again: idealists are not philanthropists. They do not love a specific person, but humanity. They love their idealistic construction, their system for controlling truth, and economic-political power. They place the individual, society, science, art, and everything else in the coordinates of their ideally designed whole. It is a system of one principle.

But if you wish to know more about what does it mean to love your neighbor as yourself and how to put these words into practice, then I recommend reading the next book.

A Code of Jewish Ethics, Volume 2 : Love Your Neighbor as Yourself