The Truth About the Endless Universe Then and Now

In principle, we know that there is an endless universe out there – in principle. In everyday life, we often forget about this. We see the sun and the moon “higher” or “lower.” Above us, we see the “arch” of the stars. It is necessary to really lie down on the ground, try to forget gravity, and imagine that we are not looking upwards, but in front of us in the distance, in the most significant possible distance. In the blackness between the bright spots, we see literally to the end of the universe – namely, we see that there is mostly nothing in that direction.

Out-Of-Center View of the Universe Lost All Clear Orientation

This out-of-center view of the universe, which suddenly lost all clear orientation, all ability to distinguish between above and below, was the view that determined the modern perception of the world and man. Even if we do not draw atheistic conclusions directly from this point of view, religious belief in this dispersed universe, which has no end in sight, could no longer be exactly the same thing as it was in the hierarchically arranged and limited celestial sphere.

We often say that this new, scientific view of nature has had the effect of disappointment and shallowness. But when it comes to looking at the sky, the effect was actually the opposite: if anything, the sky became deeper in every sense, including the spiritual. Moved from the position of the self-evident center of creation, man has now taken on a more ambiguous and mysterious role. Instead of the final deliberations, an endless universe unfolded above us for speculation about possible alternative existences – and thus for speculation about the necessity and randomness of our own existence.

Extraterrestrial Life in an Endless Universe 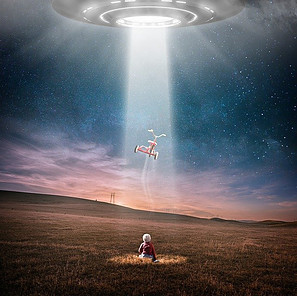 One such consideration is, i.e., Fermi’s paradox: extraterrestrial life, let alone intelligent life, has not yet been discovered. From a scientific perspective, according to which we should not assume that humans are a special event in an endless universe, this is not really a self-evident and expected state of affairs. Our galaxy alone is vast and has been around for a long time. We may not have looked good enough yet, but let’s think: humans may be pretty inconspicuous for the rest of the galaxy so far, but the first steps into the sky have been made. It seems at least conceivable that we will step there more decisively in the coming centuries or millennia. If there is a real possibility for this, we will almost certainly do so. Then sooner or later, with the expansion and colonization of new solar systems and planets, we would become inescapable for the galaxy. But centuries and millennia are a moment for the galaxy, and we may wonder, how is it that some other alien species before us have not already done so somewhere? How is it that we no longer see signs of the existence of galactic civilization among the stars? Again, here we are dealing with a genuinely gigantic statistical sample: if something is at least approximately realistically possible, it is almost necessary for such a sample. What can happen should probably have happened somewhere already.

Is in the Endless Universe Some Invisible Barrier?

One possible explanation for the paradox is that in this imaginary evolution from bacteria to interstellar civilization, an invincible barrier exists, which is almost impossible to cross, even on a galactic scale: i.e., “Big filter.” The optimistic possibility is that we have crossed this impossible point, and we are simply the first; perhaps the origin of life itself or intelligence is the most challenging and rarest event. The second possibility is more worrying: (intelligent) life is not uncommon, but galactic civilizations may be prevented from (permanently) by an obstacle we have not yet overcome. For example, interstellar travel may be too technical. Still, it may be more sinister – technologically advanced civilizations may be unstable because they sabotage and self-destruct without exception, for example, by destroying the planet beneath their feet. Perhaps we are already testing such a scenario, and it is up to us to prove that the universe is wrong with its silence!

The Book on the Subject of the Endless Universe

Cosmologists Paul J. Steinhardt of Princeton University in the United States and Neil Turok of Cambridge, England, who have had a significant past influence on theories of space evolution, have been trying in recent years to develop a new hypothesis that the Big Bang is no longer an unexplained event but only one of the stages in the completed cyclical cycle of the continual rebirth of the same universe. In their new cosmological hypothesis, the big bang is not a one-time event but is repeated cyclically in an infinite series at very long intervals lasting trillions of years.

In their recently published book Endless Universe: Beyond the Big Bang (Doubleday, 2007), they wrote that “the history of the universe can be imagined as a theatrical performance in which actors in the form of energy, matter, stars, and planets dance on a cosmic stage. The laws of physics determine it. The challenge for cosmologists is to grasp the play’s story, even though they came to the theater 14 billion years too late, long after the decisive opening scenes. “