The Stairway of Hell Is Right in Front of Us

I’m writing this article because I believe that the stairway of hell is right in front of us. Humanity simply can’t prevent the destruction of the living conditions that caused it. I don’t know why virtually everyone who talks and writes about the future of life on Earth is convinced that humanity can prevent the destruction of the living conditions that caused it. Yes, it could have prevented it – but then it would not have been humanity. It is like ordering the rich to reduce wealth disparities, the capitalists to stop economic growth or the priests from establishing a secular society. It’s like entrusting generals to train soldiers in independent thinking, psychopaths to maintain good relationships, or bullies to master people in compassion. Like letting wolves graze sheep or foxes watch over safety in a chicken coop. 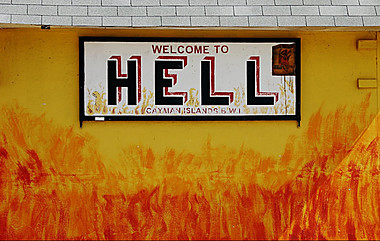 Even Slavoj Žižek, our well-known philosopher, joins the crowd of believers that humanity can save anything. In one of his articles, he offers us two possibilities: group suicide and a kind of war communism. He, too, as a consistent philosopher, completely ignored human nature in his discourses. Group suicides are carried out only by members of strange religious divisions, who are not healthy if they do not submit with their soul, body, and wallet to the first passing psychopath. There are many such people. But even giving everyone the right psychopaths to convince them to commit suicide would only bring in a little less stupid people, but not less carbon and more insects and birds in the air. However, the military structure of society is established on its own, but not in peace, but only deep in a war situation – and it never contains equality. A state of war requires speed and efficiency, which is only possible if a handful of people make decisions and the masses do so without appeal. As a progressive, Mr. Žižek should have known that dandelion would become extinct before environmentalists, without a determined boss, could decide how to preserve it for future generations.

There Is, Unfortunately, Only One Future

We will continue with capitalism as long as it goes. When it doesn’t go any further, it will be replaced by something else. At first, it may seem better than capitalism. But soon, this will be another irreparably misguided structure of society, where most people will strive for little more than bare survival so that a minority can live in luxury. Altogether, they will destroy nature as much as it will still remain. And if this new structure of society is replaced by an even newer one after a few centuries, it will be the same – until humanity becomes extinct. I don’t know why it’s not clear to thinking people. They really don’t see or don’t want to see because it’s too awful?

If We Want to Predict the Future, We Need to Look at the Past

Huge differences between people have been consistently and everywhere since the beginnings of agriculture. Some had power, influence, and far too much of everything; others — prisoners of chains or rules, redundant and marginalized — lived in want. Those in between made money for the rich, oppressed the poor, and suffocated how badly it all worked together. The destruction of nature is even older. On every island or continent we have inhabited, we have exterminated most of the large animals in a short time. We caused a lot of misery to many smaller ones by burning and setting traps. But when we started farming, we escalated it all – all the way to the mass extinction that is currently underway.

Yes, here and there, some groups of people lived in more meaningful, effective, and equal relationships or set about restoring nature. But these groups have always been small (a few dozen or a few hundred people) and short-lived (a few years or decades). All the significant social structures in history, comprising more than a few hundred people, inevitably contain a superior minority, an inferior majority, a quarrel with the mind, and an exploited nature. This fact applies to tribal and local communities, armies, large companies, and countries.

Why Would It Be Suddenly Different Now?

Yes, when the water flows persistently and annoyingly down our throats, we will start saving the world. We will solve it at the community level; it will be solved by armies, big companies, states, and supranational formations. But we will solve problems as we have done everything so far. It will be full of big words and bold plans. But they will devour the words, and the plans will be ‘adapted.’ It will be decided by those who will not be directly affected. They will decide as they see fit, not as best they can. If they are affected, their problems will be solved in the first place, even if it is more urgent that moment somewhere else. When resources are scarce, decision-makers will still have too many. Some resources will be left to destruction rather than help.

And Last but Not Least

When it is so bad that humanity will have to save its own ass, it will take care of itself and will not pay any attention to nature. We will protect ourselves from disaster to disaster, and we will leave the rubbish that will be created and other useless remnants of civilization to nature.

Like humans following human nature, nature will continue to function according to the laws of nature. The climate will heat up, storms will thicken, species will become extinct, and seas will rise – all long after capitalism stops, trade routes die down, each of us is left at the mercy of the local master of war or but he will be this master himself. Even the masses of refugees who will flood the currently uninhabited wilderness searching for freedom and peace will be forced to unite, arm, and ravage.

There are no other possibilities. The stairway of hell is right in front of us.