The Song of Bernadette by Franz Werfel

Like Kafka, Franz Werfel came from a Jewish merchant family and was influenced by Max Brod, a journalist, essayist, and versatile cultural worker of the time. After his studies and the war, Werfel settled in Vienna. Before embarking on novels in the 1930s, he mainly devoted himself to poetry (expressionist poetry) and theater (as an expressionist in ethical, historical, and religious biblical themes). Before the Nazi persecution of Jews, he fled to France with his wife, the widow of the famous composer Gustav Mahler, and found refuge in Lourdes for a while. The Song of Bernadette Is a Novel written by Franz Werfel. According to his wife’s testimony, he wrote this book with all his enthusiasm as a sign of gratitude.

“The Song of Bernadette” Is a Novel 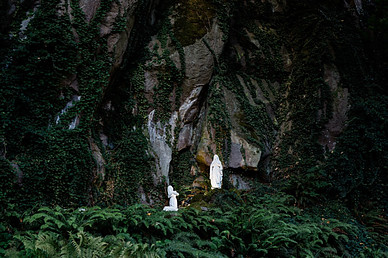 Thus Caution led me to Lourdes, whose miracles I had hitherto known only superficially. We spent several weeks in this Pyrenean city. It was a great time. At the same time, it was extremely important to me because here I learned about the wonderful story of the little girl Bernardka Soubirous and the wonderful healings. One day, in my worst distress, I vowed. If I will escape from this desperate situation and reach the American rescue coast, I will sing a song about Bernadette before I embark on anything else, in the way I know best.

This book is a fulfilled promise. An epic poem in our time can only take the form of a novel. “The Song of Bernadette” is a novel but not an illusion.
(Franz Werfel)

The First Miracle in Lourdes

In front of the prison, Croisina Bouhouhorts collapses to the ground, sweaty, breathless, half dead. He still has so much power to immerse a child up to his neck in a well. “Take it, Virgo, or give it back to me,” he stutters. “You will kill the child, but the water is icy cold….” “If I can’t save him, I will kill him. Why!” They want to snatch her child. He shows his teeth and blows. It is dangerous for anyone to walk near her. Finally, people leave her alone. It becomes dead quiet. There is only brief gargling of the child, as in agony. Then the gargling is no longer heard.

Suddenly one of the women by the pool said, “Holy Virgin… The baby cried out….” And really, for a few seconds, there was a thin squeal like a newborn. People look at each other pale. Bouhouhorts – the bath lasted precisely a quarter of an hour – wraps the baby in an apron again, presses it to his chest, and rushes back.

When the crowd reaches Cachot, where the Bouhouhorts live, Croisina is already standing in front of the door, whispering with outstretched arms, “Peace but! Sleep… My baby is sleeping…. «
The first healing happened. The first miracle. In Lourdes.

The Song of Bernadette

Click Here to purchase and read this wonderful book