Our Lady of Lourdes story begins on February 11, 1858, the fourth year after Pope Pius IX. proclaimed the religious truth on immaculate conception. That day she appeared in a rocky cave near the French city of Lourdes the Virgin Mary to fourteen-year-old Bernadette Soubirous. Mary was dressed in white, girded with a blue belt, and had a golden flower at her feet. Bernadette described the vision as follows “The lady was young and so beautiful that I had never seen anything like it. She looked at me, smiled at me, and motioned for me to step closer as if she were my mother. As usual, I picked up a rose wreath and knell. The lady nodded to me and dropped a rosary between her fingers, which she wore on her right hand.”

Our Lady of Lourdes Story Continues to the Present Day 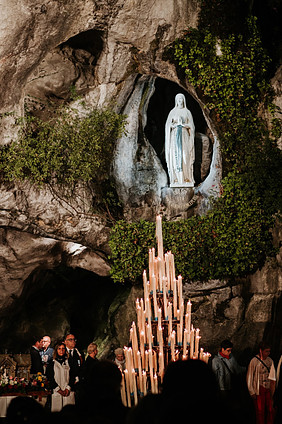 Mary appeared to Bernadette eighteen times. She promised to make her happy, but not in this world, but the other. Mary taught her to do the sign of St. of the cross, encouraged her to love the rosary, do penance, and pray for sinners. She also ordered her to arrange for a chapel to be erected at this place. Now, in Lourdes, the most famous is the Way of Mary, where miracles take place at a miraculous fountain that began to spring from the very dry soil under Bernadette’s fingers. More miracles happen during the procession of Corpus Christi when the sick call to the passing Doctor of God as their time in the Holy Land: “Jesus, Son of David, have mercy on me!”

I Am the Immaculate Conception

When Bernadette on the penultimate showing asked the Lady “who she is – she had asked her this question several times before – the Lady closed her hands, raised them to her chest, looked at the sky, slowly opened her arms again, leaned towards the girl and she answered, “I am the Immaculate Conception.”

Bernadette Had to Suffer a Lot

In the first years after the apparition of Mary, Bernadette had to suffer a lot. People wanted to ask her all the time, even with bad intentions, about her visions. She answered calmly and realistically. Bernadette never took any money offered to her (she was sick), not for her family living in poverty. She finally went to the nuns in Nevers and died there on April 16, 1879. The Mother of God of Lourdes is remembered on February 11.

In 1858, a beautiful wife first appeared to fourteen-year-old Bernadette Soubirous, a poor French girl. In a glittering white dress and girded with a blue belt, this beautiful woman appeared in a dirty hole in a stone cave by the locals called the “pig shelter.” On March 25, she revealed her name: “I am the Immaculate Conception.” Only four years later, Pius IX. proclaimed the dogma that Mary was immaculately conceived in her mother’s body and that she received the saving graces of her Son in anticipation of her divine motherhood. Today, more than six million pilgrims visit the Lourdes Cave in Lourdes, France.

About Bernadette Soubirous is also written an excellent book by Franz Werfel. To find out more about this book, click here.