The Power of Forgiveness Improves Your Life

We talk about the power of forgiveness. Well, it’s a subject that has its reason to be. Because everywhere in the evil, there are murders, betrayals, malice, crimes, disappointments that combine in the family circle, social, and professional. Certainly, there are people for whom you have a lot of esteem and affection that have hurt you. This may be unknown, friends, relatives who have hurt you. Or it may be your spouse or your relative who has hurt you. But maybe you too have hurt someone. In any case, whether you have hurt – or someone hurts you – forgiveness is necessary. 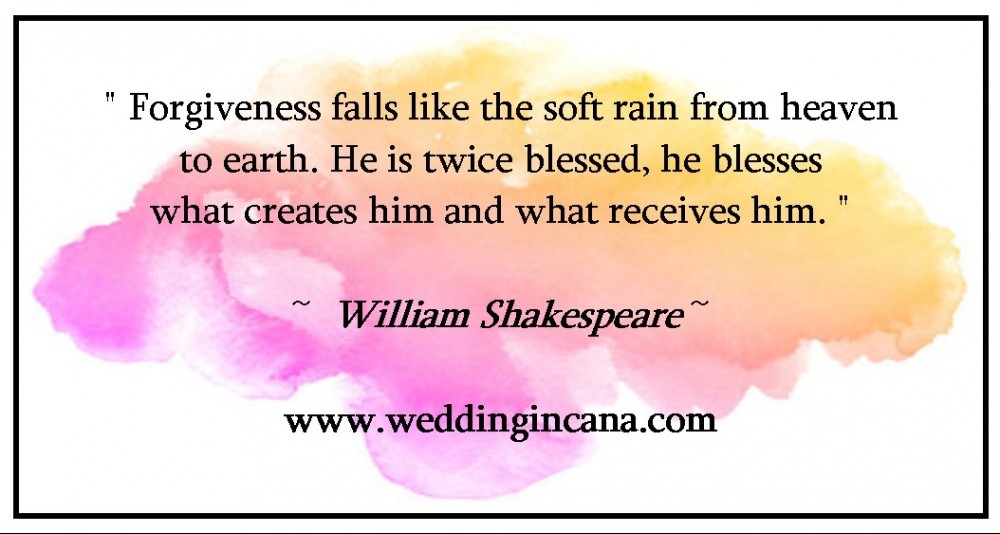 Did you feel hurt or betrayed? Have you ever been so bitter and upset about a situation or a person that you could not imagine forgiving them? You may even have replayed the event several times in your head. With each repetition, your feelings intensify and you feel even worse about yourself and that. There is evidence that reliving these emotions can have a negative impact on your health. This is what motivates the subject of forgiveness of this article!

The Power of Forgiveness Improves Your Life

Let’s start by describing how it can impact our health to stay angry, frustrated, or negative about an event. Dr. Steven Standiford, Chief of Surgery at Cancer Treatment Centers in the United States, says that if you do not get rid of these negative emotions, it creates a state of chronic anxiety. This produces a predictable excess of adrenaline and cortisol, which depletes the production of natural immune cells. These cells are your protection against cancer. If you refuse to forgive, it not only makes you sick but can keep you in this state.

Since we are on the subject of cancer, a randomized, peer-reviewed trial involving more than 83 patients assessed feelings of forgiveness, pessimism, and self-acceptance after taking a course on self-forgiveness. The course taught techniques such as reflection, expressive writing, etc. As expected, patients who had taken the course had statistically significantly higher scores for self-forgiveness, acceptance, self-improvement, and less pessimism compared to the control group.

The Power of Forgiveness for Heart Health

Literally, forgiveness is good for the health of our hearts. According to a study in the Journal of Behavioral Medicine, it has been shown that forgiveness is associated with a lower heart rate and lower blood pressure.

This same study found that forgiving also helps to relieve stress. This can bring benefits to heart health and overall health. When people are reminded of their grudges, their heart and their tension get carried away. In other words, forgiveness is associated with better heart health. And you sleep better when you decide that the past is the past. Be careful, however, not to pretend: researchers believe that the power of forgiveness for health applies only to emotional forgiveness, not to decision forgiveness. Anger and grudge could, therefore, predispose you to a heart attack!

The Power of Forgiveness for Physical and Mental Health.

It would seem that reducing the negative effect and depressive symptoms that resentment produces would strengthen spirituality, conflict management, and stress relief. The impact of forgiveness, therefore, has a significant effect on overall health.

If you think of old memories where you have been abused, hurt or offended, you automatically start to feel bad. The fact is that there are immediate emotional and/or physiological reactions that occur when you have these memories. These reactions include: Your blood pressure goes up  – Your muscles contract  – You start to inflate.

These are all signs of stress and anxiety. Recent studies show that participants who practice empathy and forgiveness for those who harm them have a reduced response to stress. To deepen this point, about 1,500 Americans who have forgiven, have shown greater satisfaction in their lives, fewer distress symptoms, less nervousness, and less sadness.

Forgiveness is necessary to fight against anxiety, stress, and depression. The power of forgiveness applies even to anxious people. Rancorous people tend to cultivate not only mistrust; but also to look at the future negatively. In their conception of life and the relationships they have with others, they end up seeing evil everywhere. They are painting a dark picture in their thoughts. They are dominated by hate, fear, anxiety, unsociability.

The Power of Forgiveness to Better Relationships with Others

Another study published in the Personality and Social Psychology Bulletin found that forgiveness helped to restore positive thoughts, feelings, and behaviors toward the offending party.

In this way, forgiveness is associated with giving, acts of charity, and other altruistic behaviors.

Forgiveness Helps Us to Have an Inner Peace

As long as we keep things in our hearts against someone and we refuse to forgive them, we compromise our inner peace. Forgiveness allows us to make peace with ourselves and to reconcile ourselves with ourselves. The heart of the forgiver is released; so is he who is forgiven for free consciousness. In any case, whether you have been forgiven or whether you are forgiving others, this helps to consolidate your inner peace.

The more you easily and truly forgive others, you will get the strength to love them even more. When you forgive someone, it is giving the person a chance to correct their fault.

On the other hand, resentment leads to hatred. Yet forgiveness leads to empathy and sympathy.

People who forgive do not let the shadow and weight of their past negatively affect their present or even compromise their future. The more we refuse to forgive others, we let ourselves be dominated by our past. We become slaves of ourselves. The power of forgiveness is the liberation of oneself.

A controlled study evaluated 78 patients receiving treatment for HIV, their feelings, thoughts, and forgiveness behaviors. Participants who have truly forgiven have higher percentages of CD4 immune cells that fight cancer!

Improving blood pressure and cardiovascular tone is another benefit of forgiveness. Researchers have been able to demonstrate that forgiveness has a cardioprotective effect on the heart. While anger is cardiotoxic, which damages the heart muscle.

Forgiveness Improves the Quality of Your Sleep

One study found that forgiveness of transgressions in interpersonal exchanges is related to better sleep. While if you remain resentful, angry, or even hostile, this is linked to a decrease in the quality of sleep.

Forgiveness: A Way to a Better World.

If men forgave each other and, above all, truly, we will see that hatred, vengeance, conflicts that undermine society would not even have their place. True forgiveness leads to an awareness of evil and also to the practice of our neighbor’s love. Mutual forgiveness generates reconciliation, peace, understanding, harmony, and the joy of living. Cohesion is possible where there is mutual and genuine forgiveness, forgiveness without hypocrisy and without an ulterior motive. One must forgive because he goes there not only for the good of oneself, of the other, and of the whole of humanity.

Conclusion on the Power of Forgiveness

There is much to be gained from working to make the state of mind of forgiveness become a pillar of education. For oneself, as for society. What to forgive is the first reaction to every injury or offense felt. To forgive oneself, to ask forgiveness of others, to forgive oneself are with love, the basis of the safeguarding of humanity and the assurance of a better daily life.

When we forgive, we free ourselves from our own slavery.

We get rid of the pain and resentment that we carry on our backs, to allow the release.

In the same way, to forgive allows concluding this always open period of the past. This act implies an acceptance of what has happened, to give rise to a deep detachment of facts or accusations made by the other but also by ourselves.

In addition to forgiving others, it is also very positive to think about what we must forgive ourselves.

The power of forgiveness is good for the body, mind, and relationships and to find a role in this world.

This should serve to convince you that it is better to let go, let go of resentment and forgive.

You have read this article. I hope it has been of great use to you. Now, think and design a plan of forgiveness. Begin by forgiving yourself, then continue by forgiving others. If you do not know how to forgive, contact a spiritual psychotherapist or psychologist in your area for help. 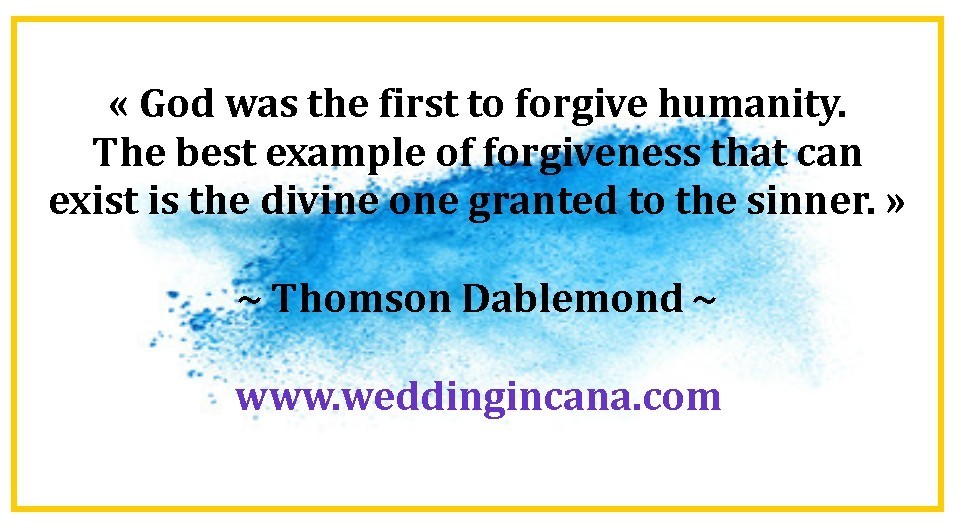 Everyone is able to forgive. To achieve this, there is a human part that works, and for the very last resort, the one that gives the courage to take the step, to overcome his sadness, his anxieties, and let go to find peace in itself, it is a divine part that comes from the greatness of soul in itself. All the power of forgiveness comes from God, just as God was the first to forgive us. How many times do we have to forgive? Every time! Yes, just as God never tires of forgiving us.