The Importance of Natural Selection in Evolution

This article will elaborate on the importance of natural selection in evolution. Much confusion about evolution arises from the notion of chance: how can all kinds of living beings in the world around us arise by chance? The answer is that they can’t: random mutations, by themselves, could never produce a new species of animal, plant, or even bacteria.

However, the mechanism of evolution consists of two basic parts. Changes and new genetic mutations are just the first steps, followed by another that is not accidental: selection. Before we look at how this process works in nature, for ease of understanding, let’s first look at the parallel process that humans use to produce new strains of domestic plants and animals, the process of artificial selection.

The Importance of Natural Selection Explained by Artificial Selection

Example: artificial selection of dogs. The first domesticated animals in history were wolves. Their domesticated descendants followed early human groups in packs, and traces of this friendship between the two species can be seen in many archaeological sites. But people did not let wolves multiply out of control but chose the ones they liked best: the ones that were the most beautiful, or the strongest, or the tamest. From these wolves came our present-day domestic dogs.

When we look at dogs today, we see a huge variety today. In the picture below, we can see a Chihuahua standing next to a Labrador: body size, shape, fur – these two races are drastically different from each other and drastically different from wolves. The difference in size, length, and shape of the fur, the shape of the muzzle, and the body can be seen in the picture of St. Bernard  on the right. And among dogs, we can find more specific adaptations: Portuguese water dogs, for example, have a foreskin between their toes for swimming and a single-layer coat that does not lose hair and repels water. How did all these characteristics come about? 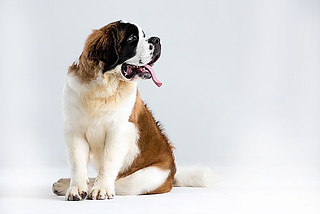 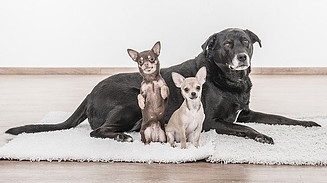 Obviously, people didn’t just wait for a wolf to give birth to a chihuahua puppy – something like that would never happen. Also, even if by some miracle it happened, we would have only one “Chihuahua” puppy among a bunch of wolf puppies, and we would not be able to establish a new breed. But humans did produce chihuahuas: instead of waiting for a miracle, they used the power of the selection process.

Each Individual Is a Little Different

Every time a wolf gives birth to a group of puppies, her offspring will carry a bunch of new mutations. As we saw in the previous chapter, most of these mutations will be neutral, some will be negative (producing sick or incapable puppies), while the rest will produce variations. These variations are key: some puppies will grow into slightly larger wolves, some into slightly smaller ones. Some will have slightly longer fur, some slightly shorter. Some will have a little gray, some a little yellow.

It is not just the appearance that will be variable. Some puppies will be more aggressive, some less aggressive. Some will be more intelligent, some more stupid. Each of these characteristics can become a subject of selection.

A person who wants to breed a new breed can apply selective pressure to this group of puppies. For example, let’s say that a person wants to breed a breed with a smaller body size. He will choose from all the puppies those who are the smallest and shortest and will allow them to mate with each other; those that are tall and large will be removed from reproduction.

In just a few generations, this way, they will get wolves that are on average much smaller than the initial group. And if he continues like this from generation to generation, and if a man’s son, and his grandson, and his great-grandson continue like this, in the end, he will get a tiny animal of only a kilo or two.

Evolutionary biologists would call this selective pressure for smaller body size: by eliminating the largest population members, the average size is slowly “pushed” in the direction of smaller and smaller values.

Of course, another person can take a group of identical wolves at the same time and apply reverse pressure on them, choosing the biggest and the highest, and throwing out the smallest. In this case, we have a selective pressure for a larger body size, which can produce giant offspring (such as the Great Dane in the picture above).

In addition to such gradual changes, we can see certain sudden genetic changes in some breeds of dogs. For example, some dogs, dachshunds, in addition to small size, have completely different proportions, with very short legs compared to a long body. How is this possible?

In these cases, the mentioned process of generating new genetic information intervened. In particular, in the case of short-legged dogs, there was a duplication of a gene called FGF4 to a new place in the genome. A new copy of this gene has evolved a new function in controlling bone development, leading to the typical elongated shape we see in today’s short-legged dogs.

From the example above, we can see the role that selective pressure plays in developing new species traits. But to understand the explanation of the processes by which selection occurs in nature, it is worth looking at another example. Let’s go back to the one we mentioned in the previous chapter but slightly different.

Example: nylonase from a natural selection perspective. As we saw in the previous chapter, nylonase is formed by the process of gene duplication. But we can ask an interesting question here: if random mutations produced nylonase in the wastewater of a nylon factory in just a few decades, why didn’t they produce nylonase in other bacteria that have been growing and living for hundreds of millions of years? The answer to this question is simple: there was no selective pressure.

Let’s take one average population of bacteria (several trillion individual cells). Each population cell will transmit several new mutations to each of its offspring, which means tens of trillions of mutations per generation. Every few years, at least a few cells will be created with genes that enable at least very weak and inefficient destruction of nylon.

Let us now imagine that this population of bacteria is found in pure water, without nylon. This single bacterium has no benefit from this new gene, as there is no nylon in the water. Moreover, this is a burden for her: this new gene is a piece of DNA that she must constantly maintain and copy. The offspring of this bacterium may inherit this new gene, but further mutations will occur in it quickly within a couple of generations – which will slowly but surely destroy its new function of destroying nylon. Eventually, after a few more generations, that part of the DNA will simply degenerate and disappear.

On the other hand, if this population of bacteria is in water contaminated with nylon, the story is completely different. As soon as a single cell develops the ability to destroy nylon, it suddenly has a tremendous advantage: a food source that is not available to any other bacteria. This first inefficient and weak nylonase allows this bacterium to use a rich food source to some extent.

This situation creates extreme selective pressure. This initial bacterium will now multiply at maximum speed, using rich food that no one else can steal from it. Her offspring will have mutations again, but the selective pressure exerts its own. Those offspring that inherit nylonase will also divide and spread rapidly, while those whose nylonase mutates and ceases to function will be starved and suppressed. Hence, very soon (in only thirty to forty generations), we will have in the trillions of descendants of the first cell in which the nylonase was formed.

This situation has additional consequences. If only one individual in the population carries weak, inefficient nylon, the chance that a mutation will occur that will produce stronger and better nylon is minimal (that individual should have the right change in the right place). But if we have billions or trillions of bacteria with this weak, ineffective nylonase, in every few generations, a few of them will experience further mutations that enable better and more efficient nylonase function. And when this better function develops, its carriers have a selective advantage, thus spreading through the population.

In this way, selective pressure not only leads to the spread of a new trait through the population, but its further development also depends on it.

Let us now take a closer look at what and how happens with the processes of mutation and selection in nature.