The appearance, shape, and structure of every living organism are based on its genetic code, “written” in DNA molecules. Every time one cell divides into two, or when a new organism is formed, DNA must be copied. This copying process is not perfect: each copy carries different types of gene mutations. 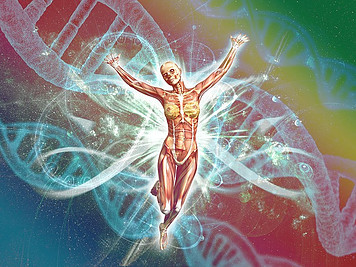 Of all the mutations that occur, most are neutral: these changes do not affect any gene, not even on the organism itself, and are passed on to the next generation. This is followed by strongly negative mutations: changes that deactivate or damage a key gene necessary for an individual’s normal life. Negative mutations lead to the death of the individual or prevent the individual from leaving offspring. In both cases, the mutation is removed from further circulation. The remaining mutations produce variation, diversity in the characteristics of individuals within the species.

This last category – mutations that produce variations – is key to evolution. Variations primarily enable the development of new features through gradual changes in existing features. The process by which this takes place – the selection process – will be explained in detail in the following chapters. In addition to this gradual change in existing genetic information, mutations can produce variation in the number of copies of genes, allowing new traits to emerge without losing pre-existing ones. How does this happen?

Existing genes change and produce small changes in the characteristics of individuals. As a classic example, we can take any species, including ourselves. Although human children possess traits that are a mixture of their parents’ traits, they always have their own special new characteristics, different from both parents. It is important to note that the variable changes are not drastic: a certain bone could be a little longer, or a little shorter, a certain enzyme a little more or a little less active, the shape of a certain part of the body may be a little different. The following chapters will show us how such small variations result in large species changes under selective pressure.

The emergence of new information occurs through a process that is also simple but requires a slightly more complex explanation. Information is most often generated through a process of duplication followed by further mutations. This occurs in cases of “downtime” during DNA copying; due to downtime, pieces of DNA can be skipped or copied two or more times. Duplications are widespread, to the extent that one of the main differences between twins is usually the number of copies of certain genes.

How Does Duplication Lead to the Emergence of New Information?

Let’s take a living thing, which has thousands of genes, including the X gene. Let’s assume that this gene is very important – if an individual experiences a mutation in the X gene, it will be sick at best and will most likely die soon.

But what if duplication occurs that affects gene X? In that case, the offspring that inherited this mutation now have two copies of this gene, X1, and X2. If a mutation in the X2 gene occurs after this duplication, the organism still survives, as it still has one normal copy, the X1 gene. Hence, the X2 gene can accumulate mutations and turn into a new version of the original gene or even a completely new gene with a new function.

Through this process, after duplication and subsequent mutations, the organism still has all the genes and all the abilities that its ancestors had, but it also contains an additional ability that was created through mutations on a copy of a previously existing gene.

Gene Formation Through Duplications and Different Types of Gene Mutations Is the Source of Most Genes in the Human Genome.

There are countless examples of this process in the scientific literature: thousands of cases have been documented in laboratories, and incomparably more have been observed in nature. Let’s look at a classic example of this kind of information that happened before our eyes, twice – once in nature and once in the laboratory.

One of the most useful and widely used products of modern chemistry (also the most inconvenient in terms of long-term consequences for nature) are plastics, among which is nylon. Nylon was first produced in 1935 and had never existed anywhere in nature before. This polymer is completely different from polymers produced by living beings, and as such, is “indigestible” to living organisms. As a result, there is no plastic decay; it decomposes only through prolonged chemical processes. But life adapts. As early as 1975, scientists found a strain of bacteria (Flavobacterium) in the water. The waste from the nylon factory was discharged, which evolved a new enzyme, nylonase, with the help of which it could use short nylon polymers as food.

Following this discovery, scientists in the laboratory exposed a completely different type of bacteria, Pseudomonas aeruginosa, to the same mixture of nylon by-products. Soon, this bacterium also, completely independently, evolved the ability to “eat” nylon. Since this happened in the laboratory, it was possible to follow exactly which genes mutated and how they did it step by step.

In both cases, this ability was created by the mechanism described above. Gene duplication, mutations, and the emergence of new genes have occurred. The bacteria retained all pre-existing genes, and in doing so, acquired a new one, which allowed them to use the decomposition of nylon as a source of energy.

In addition to the process of duplication, there are several other ways in which organisms can acquire new genetic information without any loss of existing ones. Two critical processes are viral transfer (a process in which retroviruses introduce new genes into an organism’s genome) and exon mixing (a process in which the functional parts of two different genes become the source of a new function).

So, we have seen how new genes are created and how old ones are changed. But all these are just changes in individual genes, in individual animals. In the next chapter, let’s look at how these changes spread through the population and their rules.