The Cross and Christianity Are Too Simplistically Equated

We simplistically equate the cross and Christianity, but we need to know it has appeared as a religious motif since the Stone Age. Therefore, it is considered an ancient universal religious symbol of creation, which Christianity appropriated with the crucifixion of Jesus. At first, the cross was not a symbol of the original Christians, who rejected it because they saw it only as a means of humiliation, torture, and death. Although the latter association predominates when looking at it, it primarily symbolizes resurrection, redemption, and victory over death. It was the triumph that established him. However, it had to be barely a century after Constantine’s victory at the Milvian Bridge in 312 that Christians slowly adopted the cross as their main symbol.

If you wish to read more about “The Symbolism of the Cross,” I recommend the following book.

The Cross and Christianity Were Not Connected at the Very Beginning 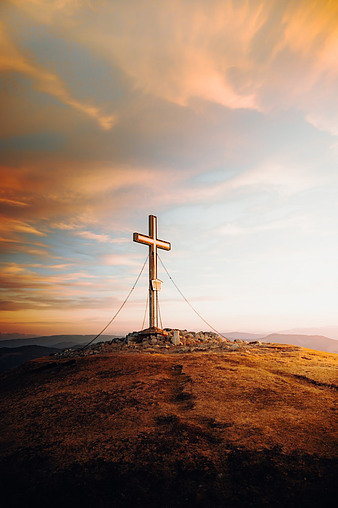 Christ’s monogram “XP” is made up of the Greek letters of his Greek name and “Ichthys” (Greek for fish) because Jesus found the apostles among fishermen, and the fish frequently appears in the Bible, where the original symbols of Christianity are. The cross was also unsuitable for the first Christians because it was used in various forms by some pagan opponents. For them, it already symbolized the union between humanity and divinity. Countless crosses are found among the oldest cave drawings of the Stone Age. Its horizontal line represents the Earth, and its vertical line represents space. Their meeting point illustrates the connection between heaven and Earth. At the same time, the cross with its four equal sides stretches out to all sides of the sky. His image also symbolizes the circle of perfection, which he fully achieves in the three-dimensional sphere, where the spatial cross spreads in the remaining two directions: up and down. So to all the directions destined for man in this world down here, which ends somewhere up there. Therefore, the cross, often in connection with the circle, was a symbol of creation for many peoples and religions before the coming of Jesus Christ. His primary role is reflected in various forms of crosses; for example, the Egyptian cross (ankh), or at least the 6000-year-old swastika, is older than the Christian cross. In addition, the cross probably had a practical value in distant illiterate ancestors. It was a tool of knowledge used for astronomical observations.

He Could Only Die on the Cross

Christianity created the most different forms of the cross because each of its crosses, regardless of whether Latin, Greek, Jerusalem, Celtic, Templar, Andrew’s, Lorraine, Tulsa, etc., primarily derives from Christ’s crucifixion. Regardless of its Christian versions, the world’s Savior could only die on the cross because it has been the universal symbol of creation since ancient times. This is also recognized by a chain of Christian theologians who refer to each other, stretching from the findings of Justin Martyr to the current Pope Benedict XVI. For them, the meaning of Christianity is gathered in the cross of Jesus because it is the key to creation and represents all its four dimensions.

The Cross and Christianity, Like the Union Between a Man and God

Although the Christian cross retains primary universal symbolism, the mission of Christ upgraded it and added a new religious value to it. The Christian cross also represents the union between the (horizontal) earthly and (vertical) divine line, which people broke through rebellion and sinful living. Since only the Creator could restore this relationship, he sent his Son to Earth, who redeemed the ungodly sinners through his suffering and death. He did this at the junction of the cross, which symbolizes the union between man and God. Thus, his blood contributed to the reconciliation between God and his ungodly people. Since God was ready to sacrifice his Son for reconciliation with sinners, the Christian cross symbolizes, according to theologians, the lowest point of creation, which is mirrored in the ritual by the washing of feet on Maundy Thursday. The cross is the last humble act of God’s incarnation. According to him, the cross was transformed from a curse sign into a reconciliation symbol. Despite God’s humility, all four sides of the cross clearly show that God is the ruler of all four sides of the sky or the entire universe. For any church, it also clearly symbolizes belonging to its community, which is why there are differences between the forms of Christian crosses. The Catholic Church Fathers base the primary sacraments of the Church, baptism and the Eucharist, on the shed blood of Christ and the water from the open wound on the cross.

The Whole Army Saw the Miracle

The Christian cross, which with the image of Christ is called a crucifix, not only reminds us of suffering but also symbolizes resurrection, hope, and (eternal) life. Therefore, over graves is not a sign of death, but victory over it! Since crucifixion was a common form of execution in the Roman Empire, the first Christians saw nothing positive in the cross. It was only Constantine’s victory that established him. He is said to have seen a cross of light at midnight before the Battle of the Milvian Bridge. Not only he saw the miracle, but also his army. That same night, a voice of Christ himself said to him in a dream: “In this sign, you will win!” A year after this legendary conversion, the Roman Emperor Constantine I the Great recognized Christianity as the official religion with the Edict of Milan. Then crucifixion as a form of torture also disappeared. Although in 325, Constantine’s mother Helena is said to have found the original cross of Christ in Jerusalem, it did not become an official symbol of Christianity until a hundred years later, which was ensured by the Council of Ephesus in 431. A year later, the first depiction of the crucifixion appeared on the portal of the Roman basilica of Saint Sabina, but without the cross, which slowly became a symbol of Christians during the migration of peoples.