The Bible Story of Esther

The Bible Story of Esther takes place during Jewish exile around 470 BC. The Jews had been defeated by Babylon, which meant they were exiled and enslaved. But later, the Babylonians were conquered by the Persians. So now, the Jews found themselves under the rule of the Persian King Xerxes. That’s where our story begins. King Xerxes decided he would throw a party, and this wasn’t your standard cookies and punch type of party. This party lasted for seven days and included all manner of lavish feasting and drinking. The King decided to show off his lovely Queen on the last day. But she refused when he called for her to come to the feast. This greatly angered the King and not only the King but his counselors and noblemen as well. Because they thought if the Queen treated the King this way, wives everywhere would start disrespecting their husbands. They’re going to be mouthing off, refusing to change the baby. They’re not going to cook the falafel for dinner. It’s going to be chaos. So the King declared that the Queen was no longer the Queen, which meant he needed to find a new one. Now, if you’re an all-powerful male in the ancient world, what better way to find a new wife than to parade every beautiful single woman in the land through your Palace? So that’s what he did. 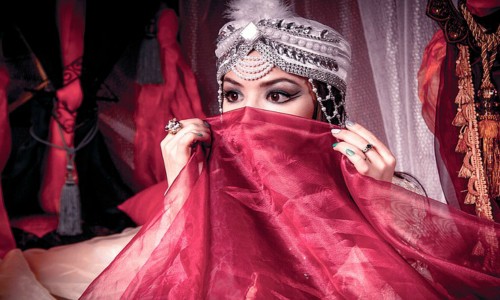 The Bible Story of Esther

A girl named Esther was among the hundreds of women sent to the palace. According to the Bible story of Esther, Esther was secretly a Jew and an orphan raised by her uncle, Mordecai. And though she was in the lowest possible social class, the Lord was with Esther, and she was a beautiful and graceful woman. When she was brought to the palace, she found favor among all the king’s staff and, ultimately, the king himself, who chose her to be queen. Sometime later, Esther’s uncle Mordecai was sitting at the city gate. When he caught two men planning to kill the king, Mordecai quickly relayed this to Esther, who told the king and promptly solved the problem.

Haman – The Bad Guy in the Bible Story of Esther

Even though he saved the King’s life, Mordecai was never recognized for what he did, and sometime later, he found himself in trouble when a man named Haman rose to power. Haman was the King’s second-in-command. Whenever Haman walked in the ways, everyone was commanded to bow down before him. But Mordecai, a Jew and a follower of God, refused to bow to Haman. When Haman found out about it, he was outraged. In fact, he was so angry that he planned to kill not just Mordecai but all individual Jews in the Empire. Haman’s influence included women and children. The king sent out a document that required all Jews to be executed and their property taken. After Mordecai found out about it, he asked Esther to address the king and ask him to change his intention. But Esther knew that if she were to approach the King without being summoned, she could, by law, be put to death.

Esther Has Decided to Mediate

Esther was in torment, but after much fasting and praying, she finally decided to approach the king even if she should perish. When the King saw her standing before him, he loved her and invited her to speak. “What do you wish, Esther?” the King asked Esther. Replied: “I would ask that the king and Haman come to a feast that I shall prepare.” The king was delighted, as was Haman, and together, they feasted. Toward the end of the meal, the King asked Esther: “What is it that you wish? Anything you desire will be given to you up to half my kingdom.” Esther replied: “If it pleases the King, let the king and Haman come to another feast that I will prepare, and there I will answer the King’s question. Haman left the palace happy that day.

But on his way home, he noticed Mordecai at the gate and was reminded of Mordecai’s refusal to bow to him. Haman’s mood darkened. He decided to have a gallows built on which Mordecai would be hanged.

The King Realizes His Mistake

The following day that night, the king couldn’t sleep. So he ordered the Book of Records to be brought and read to him. When the account of Mordecai’s warning of the plot to kill the king was read, the King asked what have we done to honor Mordecai for saving my life? Nothing, your majesty replied his servant. So the king called for Haman, and when he arrived, the King asked: “What should I do for someone I want to honor? Haman thought he was thinking of him, and he said: “You should put your royal robes on him and a crown and let him ride your horse through the streets so that everyone will know that this is the man the King honors.” The King thought that was a great idea, and he said: “Perfect, go and get Mordecai and do what you have just said. In fact, you can be the one to lead the horse around.”

Esther Tell the Truth About the Haman

Soon after this, the day of Queen Esther’s feast came. After they had finished eating, the King again asked Esther: “What is it you wish? Anything you desire will be given to you up to half my kingdom.” Esther replied: “O King, if it please you, all I ask is that my life and the life of my people be spared. I am a Jew, and it has been decreed that all Jews and the Empire should be annihilated.”

When he heard this, the King was furious. “Who would do such a thing to my queen?” he shouted Haman. Replied Esther: “Furthermore, he has built a gallows to hang Mordecai, who once saved the King’s life. The King replied: Then let Haman be hanged on it.

And so it was. Haman was executed on the gallows, and a new decree was issued, saving the lives of the Jews. Esther and Mordecai were honored and spent the rest of their days serving the King.

So, this is a summary of the Bible story of Esther. You can read more in this book.