Six Main Beliefs of Islam and Muslim Ethics of Behavior

While meditating in a cave near the Arab city of Mecca, the 40-year-old from a local Quraysh tribe experienced divine enlightenment. He heard a voice telling him to become a prophet. Thus, according to Muslim tradition, the mission of the founder of Islam, who took the name of Muhammad, “glorified,” began. And from Muhammad’s messages come six main beliefs of Islam and Muslim behavior ethics.

Although Muhammad (570-632) was illiterate, he memorized the words of God’s voice and recited them to those who began to follow him. He called on his family, friends, and neighbors to worship a single god and to be upright and very moral people. He attacked polytheism and criticized selfishness and greed. For the next 22 years of his life, Muhammad was a prophet, statesman, and military leader, and the number of his followers increased to thousands. Muhammad’s recitations were written down by his closest companions and later collected in a book called the Qur’an. These are said to have been the words spoken to Muhammad by the Archangel Gabriel. The Qur’an – in Arabic “recitation” – is supposed to be infallible and absolutely perfect as the word of Allah, “God” or “one God.”

Islam is a word for submission, in this case, submission to God. A Muslim is “one who submits” to Allah. Believers believe that Muhammad was the last in a line of prophets started by Allah and continued by Noah, Abraham, and Jesus. Both Muhammad and Jesus are considered to be human beings, not gods, but God has given them the ability to prophesy and teach about religious matters. Muhammad is said to be the last prophet of God, and as such, represents the “seal of the prophets.”

In General About Islam 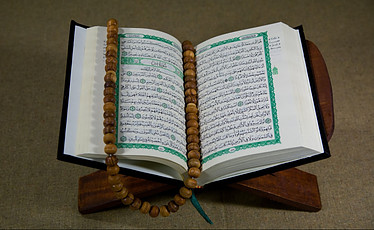 The Qur’an is a holy book by Muslims who believe it contains God’s revelation to Muhammad during the last 22 years of his life. Its author is, therefore, Allah and not Muhammad. The revelations first spread orally and were soon written down but only collected in a book after Muhammad’s death. The Qur’an teaches about the unity and power of Allah and what Muslims should believe in. It also gives them precise instructions for life. Since the Qur’an is considered to be the word of God, most Muslims try to learn to read it in the original, i.e., in Arabic, although not their mother tongue. Only one-sixth of all Muslims in the world are Arabs. Muslims learn several suras or chapters of the Qur’an by heart; some even try to learn the whole book. They read a chapter every day and wash before touching it as a sign of respect. A group of scriptures called Sunnah contains a report on Muhammad’s teachings and deeds. These scriptures interpret the Qur’an and give additional guidelines for faith, worship, and conduct.

The Muslim Ethic of Behavior

The Muslim ethic of behavior stems from the belief that everything alive was created by Allah and must therefore be respected. These principles include many social responsibilities, such as respect for parents, neighbors, and the community; also honesty, patience, and reliability. Killing animals for fun is forbidden in Islam.

Mosques are dedicated to common prayer and are the center of the community. In addition to the main prayer room, there are also rooms for washing, teaching, and teaching children. There are often wells outside. At the time allotted for the five daily prayers, sayings from the minaret are called from the minarets, often with a loudspeaker. It is a call to prayer. A person who recites verses is called a Muezzin. All adult Muslims are expected to attend noon prayers at the mosque on Fridays. Women sit in the mosque separately from men. The direction of Mecca is indicated in the mosque by an arched niche or a decorated plaque on the wall. The prayer leads Imam, which means sage. The Imam is called a mosque. Some mosques have a crescent or crescent and a star on the dome. Although the crescent and the star have no religious significance, they associate them with Islam: the crescent with the Islamic lunar calendar and the star with the Koran and is considered one of the signs of Allah.