One of the most intriguing and important life issues is related to life after death. Reincarnation has long been one of the answers offered in the East, and the idea of rebirth, although long known, is perhaps at the peak of its popularity in the West today. Really, what question can be bigger than where we go when we die and what happens to us then? So, let’s take a look at different afterlife beliefs.

For earthly life, with some exceptions, we all know it exists. And what’s next? What awaits us next? For atheists, absolutely nothing, and for their notion, life after death does not exist. On the other hand, for believers, death does not represent the end, and they believe that life has a sequel, and every religion has its own vision of the afterlife. 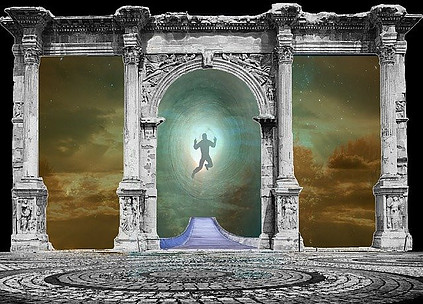 Reincarnation means rebirth or incarnation. Namely, when a man dies, this teaching says, the soul leaves the body and temporarily exists in some other place, and then enters a new body, and the man is born again.

When we say reincarnation, we usually think of Hinduism and Buddhism because this teaching is characteristic of them. One example can be found in the Bhagavad Gita:

There are several reasons why the teaching of reincarnation is popular.

Evidence (Does Not) Exist

Almost all the alleged evidence of reincarnation comes down to the memory of past lives. This phenomenon most often occurs in very young children (2-3 years), who then stop remembering everything through a few years. This seems far from serious evidence, even though there are numerous individual examples we can read about.

When we talk about adults, we don’t remember our lives. However, there is a special type of hypnosis that helps people revive memories of previous lives. This “treatment” is called regression (also regression therapy). Under this special hypnosis, a person seems to become a medium to which someone communicates the details of his past lives.

The traditional understanding of reincarnation speaks of the migration of an immaterial being. Man changes physical bodies, but the immaterial, which actually makes us who we are, remains the same. If the physical body is just a “garment” that the “soul” changes during each move (just as that verse from the Gita says), why don’t the memories move as well?
Moreover, Hinduism teaches docetism – that the material world is just an illusion(Maya).

Karma and the First Incarnation

The ultimate goal of man is to get out of samsara, or the “vicious” circle of reincarnations. In other words, reincarnation does not exist to enjoy material pleasures as much as possible but to progress spiritually and correct the mistakes from the previous one through each life. And those mistakes, along with everything else we do in life, make up our karma. As a collective result of our actions, Karma accompanies us through our lives and represents something like a burden that we try to reduce to zero. Once we succeed, instead of reincarnating again, we go to some other, higher dimension…

This leads to two problems. First, what karma did we have during our first incarnation? If we didn’t have any karmic debt, it would mean that we already had what we were actually striving for in the beginning. One of the answers is that there is no first incarnation, and the reason is that the world is cyclical – it arises and disappears into infinity.

However, this only creates new problems. If we have had an infinite number of reincarnations so far, it means that no one could ever experience enlightenment and leave samsara – because that would mean the end of infinity, which is a logical absurdity. Also, is this cosmological theory of the origin of the world an answer to our question at all? Namely, are reincarnations connected through this infinite series of created worlds? If they are, it is irrelevant. If they are not, the first incarnation then exists, and the question remains unanswered.

The End of the World

This begs another question: what exactly does the end of the world look like? Will it happen only after all people experience enlightenment? In that case, it would be expected that the population of people would decrease, not increase. Otherwise, what happens to all those who are still trapped in an infinite number of reincarnations; is there life after death for them then, and what kind?

As we have already mentioned, the population of people is increasing rapidly. Where do so many souls come from? Some Vedic texts also mention how humans can reincarnate as animals and insects, but this certainly cannot explain because their population is also increasing. So how do we explain new souls? If, however, new souls are constantly being created, they do not have previous incarnations behind them, which brings us back to the initial karmic debt question.

The Difference Between Hinduism and Buddhism

Among the many branches of Hinduism and Buddhism, there are different teachings on reincarnation. To write extensively about all these differences, we will mention one, which seems to be the most significant. Buddhism is a non-theistic religion in which complete disbelief in God is also allowed. If there is no God, what determines who will reincarnate? The “cosmic law” that is often presented as something that governs reincarnation requires intellect and cannot be impersonal energy or entity. Also, that entity must be both omniscient and omnipotent, and these are some of the characteristics of God.

Those who have failed to read the Bible may wonder if reincarnation is compatible with it and if it is mentioned at all. Very clearly, the Bible rejects the doctrine of reincarnation. Life after death for Christians means either eternal separation from God or eternal life in God’s presence.

Christians came into contact with Eastern teachings in the first centuries of the Church, and the Manichaeans had a certain influence. Thus Origen also had a specific belief in the migration of souls. He believed that God creates souls, and they then enter people or become angels and demons. This doctrine of “pre-existence” was later rejected and condemned at the Fifth Ecumenical Council in Constantinople, in 533…

Without any difference from the above, we can state that reincarnation is not by Christian teaching. Not only that, but it is contrary to him. Therefore, Orthodoxy and reincarnation have no contact points, and it is not possible to be Orthodox and believe in reincarnation.

Christianity teaches that a man dies once and then awaits judgment (Heb. 9:27). In contrast to reincarnation, which gives man a false sense of freedom to correct everything we do not do now in the next life, Christianity requires of us the pursuit of moral perfection:

We have eternal life in Jesus Christ because he redeemed our sins by dying on the cross. We do not achieve eternal life by our own efforts alone, by completely ignoring that we are sinners. There is no special technique, mantra, or ritual by which we free ourselves from the shackles of sin, but it is only possible through a relationship with God, that is, God’s grace and the love he has for us.

We would be glad to hear your opinion on this text. Feel free to leave a comment below.