May 13th Is Our Lady of Fatima Feast Day

May 13 Is Our Lady of Fatima Feast Day (Portuguese: Nossa Senhora de Fátima), so dear to the saint and great Pope John Paul II, and we remember the apparition of Mary in the Portuguese city of Fatima in 1917. 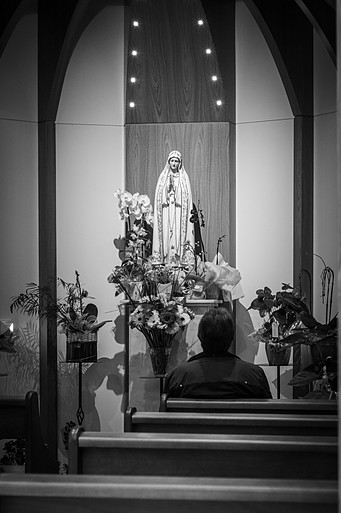 Fatima became famous in the world for the unique visions of her three children between May 13 and October 13, 1917. Every thirteenth day of the month, Lucia (Jesus of Jesus dos Santos), Francis (Francisco Marto), and Hyacinth (Jacinta Marto) experienced the apparitions of the Lady who was clothed in white brighter than the sun.

The horrors of the First World War intensified the drama of the Fatima messages, particularly related to the three secrets. For Christians, the messages conveyed by children are essential, and we can sum them up in three words: prayer, penance, and conversion.

Through Sacrifice, Prayer, and Fasting, We Can Oppose the Action of Evil

The apparition of the Mother of God only emphasized and actualized these essential gospel messages. The call that through sacrifice, prayer and fasting, we can oppose the action of evil in the world encouraged the faithful to live their faith more seriously.

In the fiercest whirlwind of the Second World War, in 1942, Pius XII dedicated the world to the Heart of Mary on the 25th anniversary of the apparitions of Fatima.

Paul VI, on the occasion of the 50th anniversary, personally made a pilgrimage to Fatima and, on that occasion, stated: “We have a great desire to honor the Blessed Virgin, the Mother of Christ, the Mother of God, and our Mother. Our confidence in her goodness in the Church and our apostolic mission is very great, and so is our need for her intercession with Christ, her Son. ”

On May 13, 1981, on the feast of Our Lady of Fatima, John Paul II., he rode in an open papal car and shook hands with numerous believers when he was assassinated. The Great John Paul II made a pilgrimage to Fatima on May 13, 1982, on the first anniversary of the assassination, repeated the consecration of the world to the Mother of God, and ended with shocking cries: “Deliver us from famine and war, from nuclear war, from self-destruction, from all wars from its beginning, from hatred and diminishing the dignity of God’s children, from injustices in social, national and international life, from lightly trampling on God’s commandments, from trying to eradicate the truth about God from human hearts, from sin against the Holy Spirit.

He also sent a message from Fatima: “Let us listen to Mary’s voice. Let the whole Church listen to it. Let all humanity listen to it because Mary wants only the eternal salvation of people and nations according to the plan of God’s Providence.”

The Book I Recommend to Read

In the book “Fatima for Today: The Urgent Marian Message of Hope” Father Andrew Apostoli carefully analyzes the events in Fatima and clears up remaining questions and mistrust about their meaning. He also challenges the reader to hear the call of Our Lady to sacrifice and pray anew, for the world is ever in need of warm hearts ready to make reparation for those at risk of losing their way to God.

Click Here if You Want to Buy and Read This Book.