The Miracle of the Sun at Fatima in 1917

Three Fatima shepherds first saw Mary around noon on May 13, 1917. But the miracle of the sun at Fatima appeared in front of many witnesses. Lucia was ten years old, Francisco nine, and Jacinta seven: none of them had gone to school yet, so they were illiterate. Lucia talks to the Lady, Jacinta sees and hears everything, and Francisco sees only the image and the movement of her lips. Mary appeared to them at the place where the Basilica of Fatima stands today. She invited them to pray the rosary and instructed them to return to the same place on the thirteenth day of the following month. Mary appeared to the children five more times, most recently on October 13, 1917. She then introduced herself to them as the Queen of the Rosary, and a solar miracle also occurred as the sun began to spin in the sky. In addition to three children, a large number of other people witnessed the event. Francisco and Jacinta (brother and sister) died soon after the apparitions and were beatified in 2000 and saints in 2017. Lucia became a nun. She died in 2005, aged 97 years.

Miracle of the Sun at Fatima 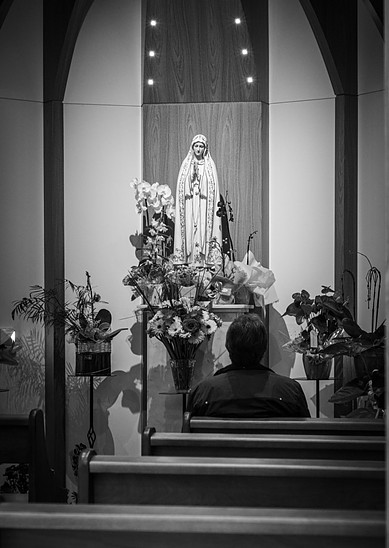 Mary’s invitation to do penance is taken very seriously by the shepherds. They try to make it happen in various ways. They give a snack to the poor, beat themselves with nettles, make penitent belts out of ropes, and wear them day and night. In the apparition on September 13, Mary instructs them, among other things: “God is pleased with your sacrifices, but he does not want you to sleep with a rope. Wear it only during the day. ”

“We left home quite early,” Lucia writes in the fourth Memoir, “because we calculated that we would be late on the way. People were agitated. It was raining very hard. Because my mother was afraid that day was the last in my life, she wanted to accompany me. (I remember, “writes the Sixth Memoir,” that she said to her father that day, “If our daughter dies, I want to die with her.” “That’s how her father and mother accompanied her.) I asked people on the inner slope to close their umbrellas when we prayed the rosary. A little later, we saw a light reflection and, immediately afterward, Mary above the oak. ‘What do you want from me, O gracious one?’ I asked as usual. ‘I want to tell you to build a chapel in this place in honor of my name, the Rosary of Mary. Continue to pray the rosary every day. The war will be over, and the soldiers will return home soon. “I would like to ask you many things: to heal some sick and convert some sinners and much more …” I will heal some, not others. They must improve and ask forgiveness for their sins.’ All the sad ones said, ‘Let them no longer offend God, our Lord, whom they have already offended so much.’ She spread her arms to reflect in the sun. As she rose, the reflection of her light bounced off the sun. So I called for them to look at the sun. I had no intention of reminding people of this, as I was unaware that they were there.

At Some Moment, St. Joseph, Lord, and Mary Appeared

I did this only after an inner inclination that encouraged me to do so. When Mary disappeared beyond the immeasurable horizon, we saw St. Joseph with the Child Jesus and Mary in a white dress with a blue cloak in the sun. It seemed that St. Joseph and the Child bless the world; they made the sign of the cross with their hands. When this apparition disappeared, we saw our Lord and Mary, who seemed to be our sad Mother of God. The apparition disappeared, and again it seemed to me that I saw Mary, similar to the Carmelite Mother of God. ”

Many Witnesses Observed the Miracle of the Sun at Fatima

As these scenes unfold before the eyes of seers, a large crowd – between 50,000 and 70,000 people – witness the ‘miracle of the sun’. It’s raining all the time. At the end of the conversation between Lucia and Mary, when the girl shouts ‘Watch the sun,’ the sky opens and the sun appears in the shape of a silver plate. It shines with never-before-seen power, but it does not blind. Sun then revolves around himself and throws beams of multicolored lights on all sides. Then it turns purple at the edges, descends from the sky like a wheel of fire, and pours fiery red flames. This light is reflected on the ground, on plants, on people’s faces, and clothing, taking on different sparkling color shades. Three times he is inflamed by insane speed; the fireball seems to shake, shake, and zigzag at the frightened crowd. The scene lasts about ten minutes. Finally, the sun zigzags back to where it thundered, calms down again, and shines with the same power as usual.

Many visitors notice that their rain-soaked clothes are dry again. (Miracle with the Sun was observed by many witnesses who were away from the place of the show, some up to 40 kilometers.) Many observers of the unusual event try to get closer to the shepherds after the event. Francisco is the first to sense the danger and run away in time. Jacinta bursts into tears and attracts the attention of a daring farmer who takes her to safety. Only poor Lucia remains in the crowd. A good giant comes to her aid, puts her on his shoulders, and saves her from the crowd. Meanwhile, 47-year-old Maria do Carmo miraculously recovers with a tumor in her head: after a sun dance, she feels better and proclaims her joy to everyone.

The Book I Recommend to Read

In the book, “Fatima for Today: The Urgent Marian Message of Hope” Father Andrew Apostoli carefully analyzes the events that took place in Fatima and clears up remaining questions and mistrust about their meaning. He also challenges the reader to hear the call of Our Lady to sacrifice and prayer anew, for the world is ever in need of warm hearts ready to make reparation for those at risk of losing their way to God.

Click Here if You Want to Buy and Read This Book.