Jesus Christ Is the Son of God, the Savior

In the Christian religion, Jesus Christ is the Son of God, the Savior, the second divine person of the Holy Trinity, but he also has other names and epithets. In the New Testament texts, Jesus Christ has several names and epithets: he is “Savior,” “Son of Man,” “Son of God,” “Son of David,” and “Lord,” “Teacher,” etc. New Testament stories about Jesus as Savior rely heavily on the legend and myth of the Messiah in the works of the Jewish prophets. For example, one of the most important prophecies of the prophet Isaiah speaks of the future coming of the Messiah – “servant of God” and deliverer of the people of Israel. According to Isaiah’s prophecy, this righteous servant will take upon himself the sins of all the people and bring them salvation. His path should be a path of suffering but also glory. The Hebrew prophet imagines him as “despised and rejected among men,” “accustomed to disease,” as one who will be “wounded for our transgressions, broken for our iniquities.” At the same time, he will bring justice, peace, and salvation. In Isaiah’s description, there is a famous vision of the “Lamb of God” who will give his life as a sacrifice for the atonement of human sins. 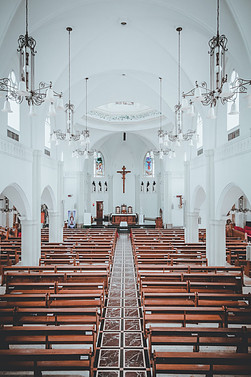 The early Christian idea of ​​the Messiah as the divine Savior is at odds with the teachings of the Old Testament Doctrine (Torah), which does not allow the possibility of any mediation between the almighty YHVH and the Jewish people in the form of a savior who would be approximately equal to God. In the descriptions of the evangelists, this Messiah, Christ, differs, to a greater or lesser extent, from those ideas and visions that later occupied Jewish prophets and apocalyptics. Under the influence of various cultural-historical and ideological changes, these deviations became more pronounced over time, and an entirely new world religion was gradually formed on them – Christianity, which owes its name to the ancient legend and teaching about the coming of the Messiah. Namely, the word Christ is the Greek translation of the Hebrew noun māšîaḥ which means “anointed one,” “Messiah.” In Christianity, however, the Jewish idea of ​​the Messiah as God’s chosen and anointed one developed into the idea of ​​Christ as God, that is, the Son of God in the “biological” sense. In the more developed Christian doctrine, the Son of God is also the Holy Trinity person.

This idea was interpreted, apparently, during the life of Jesus, and especially after his death, in different ways. In one way, it was understood, for example, by Christ’s disciples, apostles, as well as later leaders of the new Christian community. Again, the Pharisees, members of a significant Jewish religious-political party, and other Jewish scholars of the Bible approached the idea differently. The kingdom of God is understood literally now, as a specific place on earth or in heaven, now as God’s rule (in the spirit of the Jewish Bible) or, again, as something that has yet to happen in the near or distant future. That last view was also accepted by the Christian Church, in the sense of the idea of the coming kingdom of Christ, his return accompanied by the “heavenly army”.

Jesus Christ Was Quite Unpredictable in His Performances

He knows how to find himself in a state of complete bliss, and he knows how to show anger and rage; sometimes he is in prayerful ecstasy, full of mercy, but he is also able to curse all those people (even entire cities) who oppose him. He comes and goes, heals the sick, and then disappears, retreats into silence, and knows how to be blinded by anger, expelling, for example, the Pharisees from the Jerusalem temple. And all this in the name of God. It is in these descriptions that Jesus looks most like an authentic, historical person, like the true Son of Man, while there is the least space for mythological content. For several years of his preaching, Jesus, with unceasing enthusiasm and fear, proclaimed his faith in God throughout Galilee and one part of Judea, only to soon be cruelly accused and crucified. History again gives way to myth from that event in the Gospels, and the Galilean Son of Man is resurrected, like some ancient Sumerian or Egyptian deity (Tammuz, Osiris). The story of suffering, death, and the reappearance of the deity is a well-known motif, present in most ancient myths. The Christian tradition is especially characteristic of the introduction of many symbols prophetic visions in that pattern. The first three Gospels agree, for example, that immediately before Jesus’ death, an eclipse engulfed the entire earth, and “the church curtain was torn in two from top to bottom.” Then the tombs were opened, many rose up and appeared to the people. All these symbolic events should confirm only one thing in the Gospels:

Jesus Christ Is the Son of God

Forty days after his resurrection, according to Mark and Luke, Jesus ascended to heaven and then sat at the right hand of God himself. A somewhat broader description of that event is given in a separate version at the beginning of the Acts of the Apostles. Finally, in the Gospel of John, a completely separate theological-mythological conception of Jesus as the eternal divine Word (Logos), the mediator between God and man, is formed. Even further from that canonical tradition of Christ’s life and teaching, the first Christian gnostics and mystics understood, even at the end of the first century, the myth of Jesus’ resurrection more symbolically, perceiving their Savior primarily as a spiritual phenomenon, an illusion.

Who Was Jesus Christ as a Historical Figure?

As a historical figure, Jesus of Nazareth belonged mostly to those currents in the Jewish religion of the first century in which, from time to time, various prophets, messianic charismatics, and holy figures appeared, the so-called Hasids. After the crucifixion of Jesus, his movement soon expanded and moved beyond its native Palestinian context to Rome, Syria, Asia Minor, Greece, Egypt. To a more Hellenistic, cosmopolitan, Greco-Roman world whose languages and religions were fundamentally different from that which Jesus himself preached in Palestine. The Apostle Paul had to translate and adapt ideas that originated from traditional Judaism to people from such a cultural and spiritual environment. And it was through this process of Hellenization the original movement of Jesus had to be significantly transformed to eventually become a completely new, universal world religion clearly separated from Judaism.