Eucharistic Miracle in Poland On Christmas 2013

Eucharistic Miracle in Poland happened in the church of St. Hyacinth to the priest, when consecrated holy host fell to the ground during Holy Communion. The Roman Missal states how to deal with such cases, and the priest did the same: he placed the holly host in a chalice of water and stored it in the tabernacle.

Usually, the holy host is completely relaxed in the water in a few days. The local pastor Andrzej Ziombra expected such an outcome. Still, he experienced something completely different. 10 days later, he noticed that the holy host had not only remained whole but about one-fifth had turned red. He informed the local bishop, Stefan Cichy, about the unusual event and instructed the pastor to observe what would happen to the holy host for the next two weeks.

The Legnica Miracle Was Observed After Ten Days 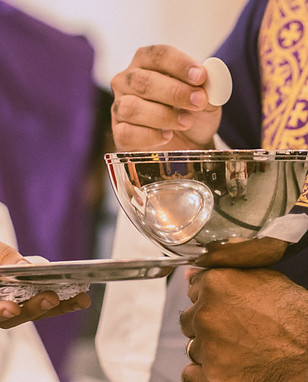 The bright part of the holy host was released, leaving a stain measuring 15 × 5 mm and resembling a blood clot.
The pastor and the priests present took him out of the water, laid him on the corporal, and stored him in the tabernacle. The bishop set up a special theological, scientific commission to observe and analyze the event in the following months.

At the commission’s request, scientists from the Medical Faculty of the Department of Forensic Medicine in Wroclaw took 15 tissue samples on 26 January. Investigations ruled out the presence of bacteria and fungi as the cause of the red spot. Another histopathological study showed that the sample fragments are parts of the heart. They also submitted the same tissue samples for scientific analysis to the Forensic Institute of the Pomeranian Medical University in Szczecin. Because they wanted independent results, they did not cite the source of the samples.

After the analysis, the institute announced that the sample included “parts of the tissue containing decaying parts of the cross-striped muscle.” It is similar to the human heart muscle, with changes that often occur during agony. Human DNA was found in the sample.”

The study results are very similar to those of the Eucharistic Miracles in the parishes of Lanciano in Italy in 700, Sokolka in Poland in 2008, Tixtla in Mexico in 2006, and Buenos Aires in Argentina in 1996.