Christ the Lord Has Risen, and the World Has Changed

Luke the Evangelist is the only known writer from the Bible who was not a Jew. He was a Christian of the Gentiles, a disciple of the Apostle of the Nations of St. Paul, with whom he had been from an early age. Luke learned from Paul, and Paul spiritually nourished him. At the same time, Luke made sure to write down all the essential words; everything written is vital so that people know: Christ the Lord has risen, and the world has changed.

Christ the Lord Has Risen, but They Did Not Recognize Him 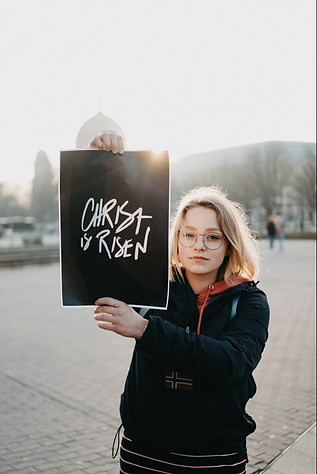 Two disciples met Jesus on the way, who was talking to them, but they did not recognize him until he broke the bread in front of them. They recognized him by this sign, by the Eucharist, which was already a widespread custom among Christians at the time of writing. While they were still talking about this, Jesus stepped among them and greeted them with “Peace be with you.” Jesus’ disciples were gathered in a heap, barricaded because they feared what the Jewish authorities would do to them. After Good Friday, it seemed that they lost everything; Jesus, their Lord, and Messiah, was mercilessly nailed to the cross, executed, and buried in the tomb. They rightly assumed it was all over. The Savior will not create a new way of life, a new world. And they felt guilty, guilty because they did not persevere under the cross with John and the women but fled in fear of the Jews. On top of all that, some unverified rumors reached them that some had met the living Jesus.

Love and Care For Your Neighbor and You Will Have Peace. Real Peace.

This remarkable passage from the Gospel of Luke also addresses us. Not only are we looking for Jesus, but Jesus is also looking for us. He seeks us when we are plagued by doubts about ourselves, about the world we live in, about the pain we feel. When we do not know what to do, when we feel that even God has left us, Jesus comes to us. It just shows up. He appeared among the disciples and greeted them, “Peace be with you!” What does this peace mean? This peace is not the peace we know here on earth. Peace, which by human definition is just the absence of war, is when we get tired of destroying each other and start preparing for a new war again. The peace Jesus speaks of and bestows upon us is the peace of God. That peace from the beginnings of creation when God rested on the seventh day after the creation of the world. It is the peace that each of us seeks, the perfect harmony between God and man, surrender, care, and mutual forgiveness, the new earth that God is announcing. This peace must spread worldwide; it is not just for the elect of the house of Israel; this peace is for all people and all times. That peace is Jesus himself. He is a personified peace. Peace is God himself!

Christ the Lord Has Risen and Would Never Leave You

Jesus said to the assembled disciples, “You thought I was dead, but the Father raised me from the dead, and you may have known that I would never leave you. I will stay with you until the end of the world. ” Open your hearts and let me in. Your problems are my problems too! Love as I have loved, give as I have given, dedicate your lives as I have dedicated it, and if you do all this, then you will taste God’s reality in your lives. Real peace will not be just the absence of war, so we will learn that pain is not our enemy. Pain is something we can carry together, and it shapes us into what we really want deep in our hearts: to be people who would face our fears and problems and transform all those problems into our virtues.

The problem with today’s world is not that it is good or bad. Today’s world has become so complicated and intertwined that we have simply forgotten how simple life really is, and that is the lesson that Jesus brought. Love and care for your neighbor, and you will have peace. Real peace.