Biblical Creation Versus Evolution – Who Is Right?

In this article, we will not present the scientific argument of the creation versus evolution debate. If you are looking for scientific arguments for creation and/or against evolution, then we recommend the websites Answers in Genesis – and the Institute for Creation Research. In this article, we will try to explain, based on the Bible, why the debate about biblical creation versus evolution exists at all. In Romans 1:25, it is written: “(They) replaced the truth of God with a lie and worshiped the creature instead of the Creator, who is glorified forever. Amen.”

Most Scientists Who Believe in Evolution Are Atheists or Agnostics

A key factor we should all be aware of is that most scientists who believe in evolution are atheists or agnostics. Some of them believe in some form of theistic evolution, and others have a deistic view of God (God exists but does not interfere in the events of this world … everything arises from the natural course). There are some who really honestly look at the data and come to the conclusion that the theory of evolution fits the data better. However, such make up only a small part of the scientists who advocate evolution. Most evolutionists believe that life developed without ANY intervention from a higher Being. Evolution is, by definition, a naturalistic science.

Biblical Creation Versus Evolution According to Darwin 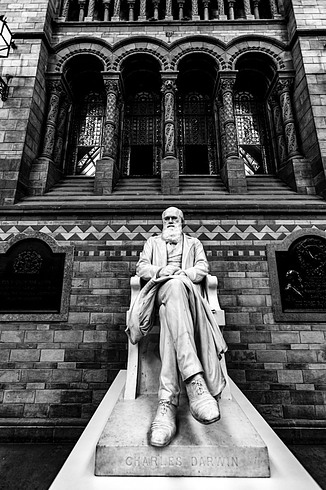 For atheism to be correct, there must be another version of the universe’s origin and life in it. Although beliefs in some form of evolution existed even before Charles Darwin, Darwin was the first to develop a convincing model of the mechanism of evolution – natural selection. Darwin once considered himself a Christian but later renounced the Christian faith and the existence of God due to some tragedies that occurred in his life. Evolution was “invented” by an atheist. Disputing the existence of God was not Darwin’s goal, but it was one of the ultimate consequences of the theory of evolution. Evolution makes atheism possible. Modern scientists who support evolution do not want to admit that they want to present an alternative explanation for the origin of life, thereby laying the foundation for atheism. However, according to the Bible, this is precisely why the theory of evolution exists.

What Is Written in the Bible?

It is written in the Bible: “The fool said in his heart: ‘There is no God'” (Psalm 14:1; 53:1). At the same time, the Bible announces that people have no excuse for not believing in the Creator God: “Truly, his invisible attributes, his eternal power, and divinity, observed by their works, are perceived from the foundation of the world. So they have no excuse” (Romans 1:20). According to the Bible, anyone who refuses the existence of God is a fool. Why are there so many people, including some Christians, who readily accept that scientists who believe in evolution are unbiased interpreters of scientific data? According to the Bible, they are all fools! Mindlessness does not imply a lack of intelligence. Most scientists who believe in evolution are geniuses when it comes to intelligence. Stupidity means the inability to apply knowledge properly. In Proverbs 1:7, we read: “The fear of the Lord is the beginning of knowledge, but fools despise wisdom and instruction.”

Is Evolution More Scientific Than Creationism?

Evolutionary scientists scoff at creationism and/or Intelligent Design as an unscientific theory unworthy of scientific investigation. For something to be considered “science,” they say, it must be able to be observed and examined; it must be “natural science.” Creation is, by definition, “supernatural.” God, and the supernatural, cannot be observed or examined (so goes the argument). Therefore creation and/or Intelligent Design cannot be considered science. As a consequence, all data is filtered through a preconceived, assumed, and pre-accepted theory of evolution without considering alternative explanations.

However, the universe’s origin and life cannot be examined or observed. Both creation and evolution are actually faith-based systems when they talk about origins. Neither theory can be investigated because we cannot go back billions (or thousands) of years to observe the universe’s origin and life in it. Evolutionists reject creation because this would logically lead them to reject evolution as a “scientific” explanation of the universe’s origin. Evolution, at least in terms of the universe’s origin, does not fit into the definition of “science” any more than creation. Evolution is, in their opinion, the only explanation of origins that we can test. Therefore it is the only view of the origins that we can consider “scientific.” But that’s crazy! Scientists who advocate evolution reject a plausible theory of origins without honestly examining its claims because it does not fit their illogically tapered definition of “science.”

We Are Responsible to God

If creation is true, there is a Creator for whom we are responsible. Evolution makes atheism possible. Evolution gives atheists a basis for explaining life that exists without a Creator God. Evolution denies the need for God to be involved in the events of the universe. Evolution is the “creation theory” of an atheistic “religion.” According to the Bible, the choice is plain. We can believe the Word of our all-powerful and all-knowing God or the illogically biased, “scientific” explanations of fools.