All Saints Day History and Why We Light a Candle

November 1 is the day of remembrance of the dead, the day of candles and beautiful ikebanas. On this day, unlike other days of the year, cemeteries come to life in the morning. The place where the dead are buried is filled with living souls and loving memories of what it is. For the first of November, we light candles out of habit that rarely asks ourselves why we are doing this, and after all, what all saints day history is. 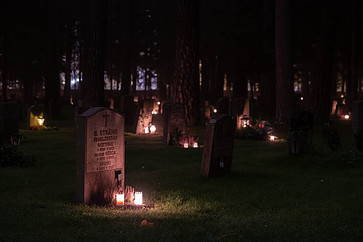 Today’s day of remembrance of the dead is intertwined with two old holidays associated with the worship of the deceased. November 1 is also the feast of all saints. November 2 is the feast of all faithful souls. The first feast, All Saints, dates back to the beginning of the 7th century when the Church decided to designate a special day for all martyrs and saints on which to revere and commemorate them publicly. Initially, it was May 13, Pope Gregory IV. however, in 835, he moved it to November 1. The second holiday, Faithful Souls, is a Christian holiday in memory of the dead. The Church introduced it in 1006 and covered the pagan days of the deceased with it. With this, she summed up the days or times around the winter solstice in a single day, when people believed that the souls of the dead would return to the world.

How Is Remembrance Day Related to the Pagan Cult of the Dead?

Remembrance Day stems from old pre-Christian notions of people that the souls of the dead return to the world during the long winter nights. After these assumptions, the deceased brought fertility and a good harvest. However, not much is known about the old pagan holiday of the dead. It can be assumed based on remains that have been preserved from the past. In the 20th century, ritual bread was preserved, which is supposedly a remnant of pre-Christianity. It was used to gift poorer children and beggars, which symbolizes the gift of souls. A similar custom, which has also been preserved in the 20th century, is the feast of souls when food and drink were left on the table on the eve.

How Has the Holiday Changed Over Time?

Christianity changed pagan notions of the return of souls, and the deceased was portrayed as ‘suffering souls in purgatory’ who must be cleansed of sins there in order to get to heaven. In doing so, however, their loved ones had to help them with prayers, as souls relied on the intercession of the living that their prayers would save them.

Why do we have a habit today of going to the cemetery for the day of remembrance of the dead, bringing flowers, and lighting candles?

Visiting graves is said to stem from people’s belief that the souls of the dead return and observe on the graves who will visit them. Flowers are part of today’s iconography of the holiday, emphasizing its appearance. Candles or flame, which gives light, were once present at death. For example, among the grave goods in the mound from Roman times, we find an oil lamp. Another example is a custom preserved in the 20th century, according to which a blessed candle was placed in the hands of a dying man and lit. Candles can therefore be understood as a symbol of eternal light, even on the day of remembrance of the dead.