Why Is Not Believing in God Treated as Religious Psychosis?

Politics and religion have always gone hand in hand. But here we ask ourselves why is not believing in God treated as an ordinary religious psychosis?

If an adult approached you and told you that he talked or at least tried to communicate with an invisible being who controls the universe, you would probably try to find a way out as soon as possible and leave the room politely. If that same person said they wanted to manage your life or at least some aspects of it, you would probably do the same. Only, probably faster this time. Yet such things happen all the time—for example, belief in God.

Despite the separation of state and church, many politicians and presidents always emphasize their belief in God to attract voters. This was also the case with Donald Trump, although we hardly see him as a traditional president and a believer.

If You Talk to God, You Are Religious. If God Is Talking to You, You Have a Problem With Religious Psychosis 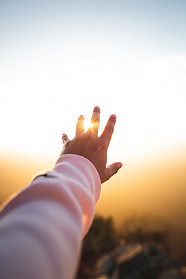 Dean Burnett, a doctor of neurology, addressed this topic. In an article written for The Guardian, he referred to the inconsistency of the media, which often called Trump a madman. But not in the case when he declared that he was a representative of the almighty, invisible deity who created the world in six days. His move, in that case, was described as cynical flattery.

If you talk to God, you are religious. If God is talking to you, you are psychotic, said Dr. House in a popular television series. This and similar statements are intended to emphasize double standards. The former is applied in the case of accepting one’s religious beliefs, while at the same time, we consider similar, scientifically unfounded claims to be a sign of mental disorders. Dr. Burnett argues that there is a reason for this and such inconsistency.

What Is Religious Psychosis or Psychosis in General?

Psychosis is defined as the loss of contact with reality, and it manifests itself in various ways. And it’s actually disturbingly common. Our complex brains are susceptible to several internal disorders, from mental to physical illnesses. Moreover, they are so sensitive that we call psychosis a diagnosis of exclusion because we must first exclude other problems before we can diagnose psychosis at all.

Psychosis is most often manifested through hallucinations (false perception that something that does not exist actually exists) and delusional disorder (illusions, belief in something that is not true).

Hallucinations can be simple. For example, someone persistently claims that the bear in the room wants french fries. Just look around and see if there really is a chattering bear in the room. In case there is no bear, the person is probably hallucinating.

On the Other Hand, Illusions Are a Bit More Complex

Illusions are a little more complicated because they are not about what someone sees but what they believe in.

Illusions are complicated to refute with arguments, regardless of the strength of the evidence. This is probably one of the key reasons why you will never dissuade a psychotic person who believes they are being followed. While you see an older man walking a dog, they see a government spy. If you allow yourself to be drawn into the debate, they will probably conclude that you are working for “them” by the end of the argument.

Why Is the Belief in God O.K. but Other Illusions Not?

Dr. Dean Burnett wonders why we do not treat religious beliefs in the same way as other illusions. Believers also tend to resist when you question their beliefs.

To believe that there is an almighty father figure in heaven who observes and condemns everything you do, or that his son, who died more than 2,000 years ago, will return at any moment, is no less insane than the dark government forces that follow your every step. Moreover, the latter is far more likely than the former.

Why Are We More Lenient in the Case of Faith?

Barnett explains that illusions create anomalies in the human brain. More precisely, anomalies in the brain that explain what is happening and what should happen. As a rule, the brain maintains a mental model of how the world should function based on experience. Beliefs, experiences, expectations, assumptions, and calculations are combined to understand how things work. So we know what to expect if we put our hand on the hot plate. We don’t need to go through the process of understanding what is happening every time. Fortunately, the brain is good at filtering out unnecessary information. Illusions are what happen when this system stops working.

Barnet argues that the problem is that our brains do not come to this world with experience. It is something that we gradually build over time and base our knowledge on life experience and education.

Therefore, if you were raised in an environment where it is believed that there is a God in heaven or that the earth is a flat plate, or that six-handed gods rule the world, there is no reason for you not to believe that either. Nothing you experience daily refutes this claim, so your mental model of the world is in line with that.

What Matters Is Who Talks to God

This is why delusional disorders are diagnosed only when illusions are not per the existing belief system. If a believer in church talks to God, that is perfectly normal behavior. If an atheist does the same thing during a business meeting, he probably has psychological problems. But if they both start a tirade about the world disappearing in 30 minutes because of angry flying frogs living in the sun, they both have serious problems.

Unless that also exists in the Bible.