Why and When Did New Year’s Day Become a Holiday

It’s lovely on New Year’s Eve because of the sumptuous dinner and the festive family atmosphere. But why and when did new year’s day become a holiday?

Fireworks: There Is No Crisis, Let Alone Famine 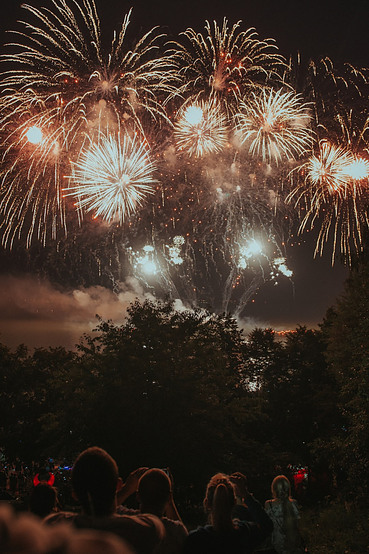 You can see quite a beautiful part of the Pannonian plain from our house, which lights up at midnight. It explodes. It glows. In fact, I don’t even know what term to use to describe the sight of a multitude of fireworks dotted across the New Year’s sky. The phenomenon of the radiant night is quite long. Even twenty minutes after midnight, there are about a dozen brightly colored pyrotechnic decorations in the air at the same time.

Even the man who likes to chase young people and calls the police because of firecrackers has his own fireworks. Why do humans launch such a multitude of bright firecrackers into the air in a few minutes? There is clearly no crisis. Such things are much too expensive to be afforded in a country where people are supposed to be hungry.

Most people still see the cause of this costly and very short celestial phenomenon, which Westerners repeat every year, in the change of one digit of the year, which is banal. But in reality, it is not because the reasons for the celebration are much more profound. Celebrating the New Year is part of the centuries-old Slovenian culture. At first glance, it seems that Christmas is a Christian holiday, and New Year is secular. That is why some Christians almost ignore the New Year. Just like some non-Christians, they ignore Christmas. If you delve a little deeper into history, you’ll have a good laugh. It is the same holiday. In the Slovenian tradition, the celebration of the New Year lasts several days: the feast of the birth of God with three highlights: Christmas, New Year, and the Three Kings. On the day before each holiday, there is a holy evening. Or the eve. First, second and third. We all know that on the first holy evening, we remember the birth of Jesus. Most probably also know that January 5th is the eve of Jesus’ announcement (press conference, we would call it today).

So, Why and When Did New Year’s Day Become a Holiday

What about the second holy night, New Year’s Eve? Why did the New Year become a holiday? On New Year’s Day, Jesus’ parents brought him to the Jerusalem temple, where he was circumcised. In today’s sense, this would be called an entry in the registry book. So the New Year is not a non-Christian, secular, or even atheistic holiday, as one might think. New Year is a Christian holiday.

But only at first glance. Here comes one big but. The celebration of the new year is actually older than Christianity.

Our Slavic ancestors already had a celebration on these days of the year when they believed in Perun, Svetovid, and Triglav. The Slavs believed that the God Svarožič was born on the day when the period of lengthening of the night ended. This is the son of the fire god Svarog. In the Russian tradition, Svarožič is the king of God among men. But surprising similarities between Christian and “pagan” traditions can also be found in other, even older Indo-European mythologies. Christian missionaries leaned on older customs and gave them new meanings. So the New Year is essentially also a “pagan” holiday.
The celebration of the winter solstice is as old as homo sapiens sapiens. The Slavs celebrated this holiday in their own way. Slovenians have celebrated it in their own way for centuries. In recent decades, however, every Slovenian celebrates it in their own way. Some with glasses of booze, others in front of the television, others with firecrackers, others with meditation. To each his own. It’s just a shame that some people disturb their neighbors with their celebration, which is not the best, despite the longest night of the year. Which, by the way, is not on New Year’s or Christmas, but on December 21.
With a great desire to respect even the holidays that we ourselves do not have for holidays, let me wish the readers of weddingincana.com a happy and healthy year in 2023.