What Is the Meaning of Incarnation?

Once lived a man who viewed Christianity, especially the story of the incarnation of the Son of God, as nonsense. He simply didn’t understand what is the meaning of incarnation. He was not a mocker by nature. Moreover, he was kind, kind to his family, and honest when he treated others; he even went to church with his family. But he couldn’t believe it all about the incarnation the church preaches, especially on Christmas. He was also so honest as to publicly admit that he did not believe in such a thing. “I’m sorry I could hurt you,” he told his wife, an active believer, “But I can’t understand that claim that God became man. It doesn’t make any sense to me!”

The Tiny Birds Helped Him Understand the Meaning of Incarnation 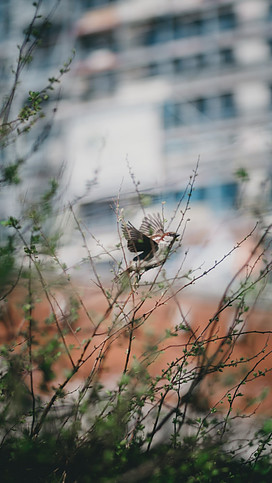 One Christmas Eve, his wife and children went to church at midnight. He refused to join them. “I feel like a hypocrite,” he explained. “I would rather stay at home. I will wait for you and prepare the tree.”

Immediately after his wife and children drove away from the yard, it started to snow. The man approached the window and watched the snowflakes fall thicker and faster. It threatened a blizzard. Then he went back to his armchair by the fireplace and opened the newspaper. Ten minutes later, the sound of a dull thump behind him caught his attention. It was short, but he heard another behind it, then another. He thought of some children throwing snowballs at the window in the living room, where he was sitting. He turned but saw nothing. It was dark outside. He got up and went to open the door to investigate. He was blown away by a strong wind and icy snow. To his surprise, a flock of sparrows fluttered in panic in front of the lighted window. The sparrows tried to enter the house to escape the snowstorm.

How Can I Help Them?

“I can’t let these poor creatures get exhausted and freeze out here,” the man thought. “But how can I help them?” Then he remembered the barn where his children kept a pair of ponies. He rejoiced at the thought of how warm it would be for them there. He put on his coat and made his way through the snow to the barn. He opened the door wide and turned on the light. He waited a moment. However, the birds did not come. They were still fluttering desperately in front of the house.

“Maybe they’ll be attracted to food?” he thought. Then he went to the house, took the bread, and threw it piece by piece on the snow, making a path to the barn. To his disappointment, the sparrows overlooked the bread and still wandered lost in the air. There were fewer and fewer of them because some birds were already frozen.

The man now began to jump around the confused flock of sparrows. He waved his arms and shouted to scare them and point them toward the lighted and warm barn. However, the birds just got shocked even more and ran away in all directions. Many disappeared into the darkness. Not a single sparrow flew towards the barn to escape.

As a Tiny Bird, I Can Help Birds

The man then, tired of jumping and thrashing, stopped to take a breath and thought: “It seems to me that I look like a big and scary creature to them. I can’t think of any way to convince them that they can trust me. If only I could become a sparrow, just a few minutes, maybe I could save them….”

He Suddenly Understood the Meaning of Incarnation

At that moment, the church bells rang. The man paused for a moment, listening to the bells but also his own thoughts. Then he fell to his knees in the snow. He cried out, “Now, God… Now I see the point! Seeking help from these poor birds, I realized why you had to become human! Oh, thank you! ” And he immediately rushed to join his family in the church.