The Whole Catholic Liturgical Year Is Focused on Easter

Easter is the center of the entire Catholic liturgical year for Catholic believers. As it is celebrated in spring, the new season symbolizes renewal. The purpose is to give us courage and hope for another year. Numerous Easter customs are nurtured, from Easter bonfires and penitential processions on Good Friday to decorating eggs and giving bread and Easter eggs with Easter festivities and games.

You can, of course, read more about this in books. One such book I recommend is this one.

Almost All Catholic Liturgical Year Is Based on Old Rituals 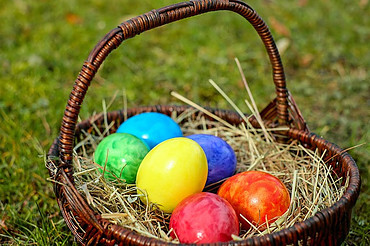 Catholic customs related to Easter begin with Ash Wednesday (the day after Carnival) when Easter Lent begins, Lent, which connects winter and springtime and lasts until Easter. The richness of customs and their intertwining among different cultures gives the whole ritual another special note. It is customary to carry food for blessing, decorate the table, and prepare good food on Easter. Easter eggs are given away, and bonfires are lit in some parts. The Easter celebration ends with White Sunday – the first Sunday after Easter, and its name is associated with the clothes that should be worn. Long before Easter became the holiday we know today, people celebrated the arrival of spring in various ways. The celebrations were associated with the sun and the vernal equinox. Celebrations were based on the lunar calendar due to the connection between the lunar and female cycles.

Easter Was Named After the Anglo-Saxon Fertility Goddess Ostara

European nations and tribes celebrated the beginning of spring on the vernal equinox (day and night last equally), blessing the seeds of various fruits by placing colored eggs on the altar. Christianity grew stronger, spread throughout the world, and the Church appropriated and slightly altered already existing non-Christian celebrations. Christ’s resurrection is associated with the celebration of the equinoxes, and Easter has arisen. One of the oldest sources about Easter is the 2nd century Easter homily written by Meliton of Sardinia. In 325 AD, church leaders agreed that Easter should be celebrated on the first Sunday after the full moon after the vernal equinox.

The most common Easter symbols are painted eggs, an Easter basket, and an Easter bunny, which is also the most popular. There are many stories about how it came to be. According to one legend, the fertility goddess Ostara turned a bird into a rabbit; the rabbit was as fast as a bird, but he was still disappointed that he was not a bird, and Osara allowed him to lay eggs one day a year, just like a bird.

That’s why the Easter nest came into the story later. Some old records speak of how the rabbit symbolizes fertility and, in some Anglo-Saxon peoples, represents the incarnation of the fertility goddess, Ostara. The first document in which the rabbit is mentioned as an Easter symbol dates from 1500. It was found in Germany, although it is believed to have appeared much earlier in some folk customs. Easter eggs are a symbol of fertility and the birth of new life. In the past, eggs were painted in bright colors to celebrate the arrival of spring. The custom of donating eggs dates back to before the arrival of Christianity.

In some medieval writings, the feudal lords gave eggs to their servants. There are legends among the Egyptians, Greeks, and Indians about how the world came into being from eggs, and colored eggs were found in prehistoric tombs that were supposed to help the dead in otherworldly life. During these rituals, magical words were written on these eggs, which drove away evil forces. Hence the name Easter eggs. The Easter egg was once the key that opened the door to good neighborly relations. She conveyed desires, hopes, and expectations.

From Nation to Nation Differences

Decorating eggs is very different from nation to nation, and today one of the most famous and beautiful is wax decoration, which is practiced in Slavic countries. Greeks paint Easter eggs red, symbolizing the blood of Christ, while Germans and Austrians have a custom of donating green eggs on Holy Thursday, the day of the Last Supper.