The Wedding in Cana of Galilee and Its Meaning

The wedding in Cana of Galilee had great significance in Christianity from the beginning. Practically all the church fathers commented on this event. They also tried to discover the multifaceted nature of the wedding. The great Origen believes that it is a synthesis between creation and salvation. In the Gospel of John, the wedding in Cana of Galilee is found at the beginning of chapter 2. The first chapter of John’s Gospel unfolds over four days. And then he says: on the third day; there was a wedding in Cana of Galilee (John 2:1). Origen explains how the days were counted in the Bible: today, tomorrow, the third day. The third day means today plus two days. And since in the Gospel of John there were four days already until the wedding (the setting of the first chapter of the Gospel of John), the third day means four plus two, which means the sixth day.

At the Wedding in Cana of Galilee, Christ Revealed the True Image of the New Man 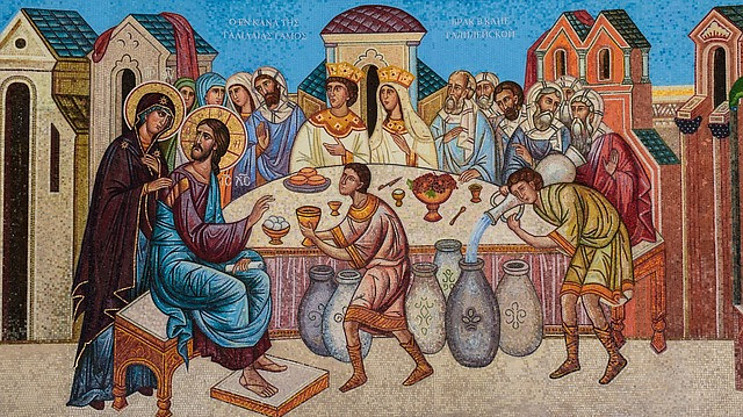 The sixth day has a significant symbolic meaning in the Bible because on the sixth day; God created man. In the event of the wedding, Christ will reveal the true image of the new man. At the same time, the third day also means resurrection day. Christ himself says that he will rise from the dead on the third day. Christ’s resurrection is the epilogue, the conclusion of His great night, when He sacrificed Himself on the cross, shed His blood, revealed the new man who is God’s Son in the Son (that is, the man who sacrifices himself), and the Father raised him from the dead in the power of the Holy Spirit. So it is about the revelation of Christ as creator and savior.

How Is St. Augustine Commenting on This Event?

Commenting on this event, St. Augustine says that the miracle of wine from water is not something special because it already happens in creation itself; the Lord did it at the very beginning when he created the earth. Man cooperates with God, and every year this miracle happens: it rains, water goes to the vines, the vine produces grapes, the grapes are pressed, and we get must that matures into wine. In nature, this happens once a year, but Christ shortened it in time in Cana of Galilee. Augustine’s explanation is in itself very entertaining. Still, at the same time incredibly profound because we will see that this wine will reveal Christ and that all creation was created in him, through him, and for him, as he says in the letter to the Colossians (Colossians 1:16). All creation actually carries within itself the word by which it was created, and that word is Christ. When Christ became incarnate, creation was revealed as the substance of this world, and the revealed word is not just a word but an incarnate dimension of Jesus Christ.

Wine Means the Taste of Life, the Source of Life – Love

The Church Fathers warn us that the bride and groom look very sad. How can we conclude this? Mary says to Christ: They have no wine! In the wisdom books of the Old Testament, wine means the taste of life, the source of life – love. The wise Sirah writes in the Bible: what is a man’s life without wine? A person without love has no meaning, taste, or life (cf. Sirach 31:27). Life exists only as love. So when Mary says that they have run out of wine, it means that there is no more love between them. So why are they dating if no love between them is why their faces are sad. The image of the bridegroom and the bride in the Old Testament is also the image of Israel and God, humanity and God. In the relationship between man and God, there has been a “drying up”; love has dried up, and there is no more love.

Mary Opened the Way to Salvation

Mary is the last person of the Old Testament. Evangelist John says that Mary was already at the wedding, but Jesus came with his disciples later. As if to show that the mother still belongs to the Old Testament, but at the same time, she is the one who opens the way to a new history, a new humanity, because she opened the way to salvation.

At the Wedding in Cana of Galilee, They Had Six Stone Jars

In almost the same words, the evangelist John wrote that the mother was there and that there were six stone jars. These stone jugs are the center stage of the entire event. The huge jugs were intended for ritual purification. All the church fathers see the image of the law of Moses in the six stone jugs. Moses prescribed purification, and the law served purification. The number six is the number of constant frustration. The number of perfection is the number seven. At the wedding party, we had six jugs, but they were empty, which meant that the arrangement could not reach the end. Pitchers (lineups) are no longer used for purification. If the law no longer serves the purpose of purification, if it becomes “dry,” in the end, it becomes just a regulation, a law, a commandment, a prohibition. When religion becomes just a bunch of rules, commandments, and prohibitions, it is no longer religion but an ossified religion. That is why the relationship between God and man is sad; there is no joy in it, there is no life, and there is no love because only love gives life and joy.

My Time Hasn’t Arrived Yet!

At Mary’s insistence, Christ told them to fill the jugs with water. Christ says to Mary: Mother, wife, this does not work per se concern the two of us. My time hasn’t arrived yet! (cf. John 2:4). This sentence is significant because, in the following, Christ nevertheless performs a miracle. By this, he shows that this is the image that will be finally realized when his hour comes – the great night that he has been talking about all along. “The hour has come for you, Father, to glorify your Son.” (cf. John 17:1). What Christ will do in Cana is also connected with his hour, with his Passover.

Love Cannot Come From the Law; Love Comes From God

So the servant filled the pitchers with water to the top, which the evangelist John explicitly emphasizes: to the top. And then he starts pouring the wine. The servant is amazed by this. Likewise, the elder, the wedding leader, asked the bridegroom where this wine had finally come from, which was better than the one they had previously drunk. John adds that the servants knew where it came from because they had previously collected water in the jugs. He literally says this: “When the elder tasted the water that became wine, he did not know where it came from, but the servants who had gathered the water knew.” (John 2:9). The servants knew they had captured the water, but when they poured it for the wedding guests at the table, the wine came out. What does John want to tell us about this? That the wine did not come from the law (water) but from the word of Christ. The law cannot give life. Paul himself says: if we had a law that could provide me with life, it would not be necessary for Christ to come. The lineup prepared the ground. (cf. Galatians 3:21) So the servant looks in amazement at the jugs because he knows that he has collected water, but now he is pouring wine. Love cannot come from the law; love comes from God. A religion built on a law of commandments and prohibitions will wither away in ideological moralism or some ideology or moralism. It will not give a person life, the taste of life; it will not fill him with joy. But wine cheers the heart.

Christ is depicted with a wound. We had already said that this event is connected with Christ’s Passover, when blood and water flowed from his side. When a soldier opens Christ’s side with a spear, we are reminded of Adam, whose side God opened in Paradise and created Eve from his rib. Mary stands next to Christ on the open side, pierced because it is the image of the Church, which is born from the blood of Christ. New humanity was born here, and a new relationship between God and man was born. In this relationship, God does not want any sacrifices from us but offers himself in his Son. So that we don’t have to sacrifice anything, God sacrificed himself. Therefore, Jesus Christ reveals himself to us as the Son of God and a man. His pierced body showed the true essence of God: self-giving. This is the foundation of the new covenant, the new relationship between man and God. This is the love of the God-man, Jesus Christ, who, as God’s Son, offers himself to the Father and us. He put himself in our hands so that we would know how much God loves us and that he considers us worthy, even though we are sinners. The apostle Paul says that God has entrusted himself into our hands to touch our dead bodies and humanity with his glorious, glorified body. (cf. Romans 5:8). Therefore, the relationship between God and man is from now on the relationship between the Son and the Father. In creation, all religions, philosophies, and the Old Testament emphasize the relationship between God and man: God and Adam. This relationship was destroyed by sin. And any other path offered to man as salvation eventually dried up in a kind of religious sclerosis. Christ revealed himself with his blood, with his love as a gift of himself to the Father and into our hands, because the relationship to God is the relationship of the Son to the Father: God is the Father, and man in Jesus Christ is his Son. The relationship between them is love; this love is perfected in Christ, and we receive it through baptism and live it in Christ.