The Importance of Water for Life

This article presents fundamental insight into the importance of water for life. This educational article deals with some fundamental questions regarding water, such are the water content of our body and the amount of water on our planet. We also touch on the issue of water properties and drinking water supplies. We take you on a journey through the eyes of a water molecule.

The Importance of Water for Life 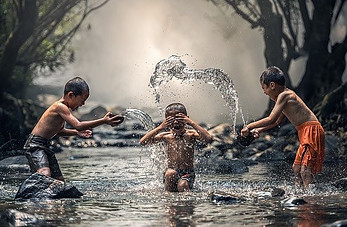 Water is vital to all living things. It represents about two-thirds of the weight of our body. Growing plants contain water at 7 to 9 tenths of their weight, and the jellyfish’s body is almost entirely of water. People get water with food and drink; we exclude it with urine, breathing, and sweating. The same applies to many species of animals. The plants suck it through the roots and emit it through the leaves. Because various substances, such as sugar, salt, and minerals, are dissolved in water, these substances also circulate through living beings and enable them to develop and live.

The importance of water for life on Earth could be divided into physiological, hygienic, and economic. Water allows our body to function as well as maintain hygiene. We use much more water for the purpose of hygiene than for physiological purposes. Most of the water is consumed in industry, transport, agriculture, and other industries, ie for economic purposes. Water is also important as a source and transmitter of energy or as a refrigerant.

Water is also a habitat for many plants and animals in streams, rivers, lakes, seas. They can live there permanently, such as algae, fish, or occasionally, such as frogs, turtles…

Water and Our Planet

The Importance of Water for Life is also expressed through its circulation. Water is a natural asset that is a prerequisite for life on Earth and is continuously circulating in nature. With evaporation, it enters the atmosphere and returns with precipitation to the earth’s surface, where part of the water is consumed for daily life, part of it drains into rivers and underground, and partly evaporates.

In the past 100 years, drinking or freshwater consumption has increased sixfold. Even today, there are many countries where water scarcity, especially clean drinking water, is high. Increasing population and the threat of climate change can lead to a major global water crisis on the way water is used so far.

Emissions of dangerous substances directly or indirectly released into the groundwater, which is the supply of our drinking water, impair water quality and reduce the suitability of water resources for use. Water is like a chameleon that completely reproduces environmental patterns because water is an excellent solvent and returns to our glass or a plate over a year, a decade, or a century everything that we once shook into the environment.

Water is a chemical compound and a polar molecule. Under standard conditions, the liquid is the chemical empirical formula H2O. The formula says that one molecule of water is made up of two hydrogens and one oxygen atom. Water is found almost everywhere on Earth and is a must for all known life forms.

Pure water is a liquid without color, odor, or taste. It consists of 11.11 percent hydrogen and 88.89 percent oxygen. Water from springs and groundwater is usually clean. It contains 0.01 to 2 percent of dissolved substances, such as calcium and magnesium salts. About 3.5 percent of the salt is dissolved in seawater.

In nature, water is known in its solid, liquid, and gaseous state. Hard water is known in the form of ice, ice candles, tiny ice crystals. In the liquid state are lakes, rivers, droplets, and in the gaseous water is water which is invisible. There is also a lot of it in the air we exhale.

Water has a maximum density (1000 kg / m3) at 4ºC. Ice is formed below 0ºC, which means frozen water in the solid-state. When water freezes into the ice, it expands, making the ice rarer than the water and floating on it. The ice spreads with such force that it blows up the bottle and even the rock. Water has a boiling point near 100oC at normal air pressure (101.3 kPa). At low temperatures, the water evaporates slowly, with steam rising rapidly when heated. Indoors, the air above the running water is saturated with water vapor. Excessive amounts of water vapor condense, creating mist and dew. Pure water conducts electricity very poorly since the electric charge in the water molecule is split due to the nature of the oxygen and hydrogen atoms.

Water is continuously circulating in nature. Water vapor enters the atmosphere mainly through evaporation from seas, oceans, lakes, rivers, snowy and icy areas, and terrestrial soil, and is also released by plants and animals. Water vapor is a little lighter than air, so it rises in height and travels with winds. In the heights, water vapor thickens into clouds and precipitation and falls back to Earth’s surface. On the floor, it comes together and gathers. One-third of it evaporates, and two-thirds of the water drains through the surface or underground into streams and rivers and returns to the sea. In this way, water is constantly circulating in nature, cleaning itself, or polluting. The energy of the sun maintains water circulation in nature. Of the total energy received by the Earth, about a quarter is used for water circulation.

Imagine being a water molecule and indulging in an exciting journey around our planet. We would be in the air for nine days, we would travel for two weeks on the river, we would be bound for up to one year in the earth, we would host a large lake for up to 10 years, we would float for 120 years in the shallow sea, 50 to 200 years in the groundwater, and 3,000 to 5,000 years in the ocean. The Antarctic white cap would freeze us for 10,000 to 100,000 years. And we would travel the same amount of time in the depths of the underworld. The speed of travel of a water molecule means the speed of circulation of poisons through an ecosystem or the time of the presence of dissolved toxins in a single aqueous medium. Groundwater movement speed is only a few meters per month or less!

Drinking water consumption is rising sharply, and drinking water supplies are declining rapidly. In the future, drinking water is likely to be one of our significant problems. With the discovery of bacteria, viruses, and parasites that once caused significant health problems and epidemics, drinking water quality has significantly improved. In a large part of the world, where drinking water is scarce, these problems are still pressing, and pollution problems from industrialization and intensive agriculture are still emerging. Even developed Europe is still struggling with the issue of drinking water pollution in water supply systems. Despite various forms of filtering (mechanical, chemical), chlorination, and taste enhancement, water is still useless or at least tasteless. Technologically sophisticated wastewater treatment plants in many places can no longer provide clean water up to the prescribed limit for harmful substances.

The Importance of Water for Health

As much as 2/3 of our body is from water, which is replaced in about five weeks. We need water to function in all vital processes in the body. Doctors recommend that you use 1.5 to 3 liters of water daily. Lack of water in the body increases the effects of stress, impairs mood, inhibits body cleansing, causes disruption of the function of the internal organs. The better the water we drink, the healthier is our life and vice versa. So, we will do our best for ourselves by drinking clean water — both in bacteriological and hygienic terms, as well as in terms of its original non-contamination. Clean water is, therefore, an irreplaceable drink that cleanses the body of various toxic metabolites and is a source of energy and health. We can without exaggeration conclude that water is a miraculous fluid.