The Big Bang Theory of the Universe Has a Special Status

Among all modern scientific theories, the big bang theory of the universe has a special status not only because experiments have well supported it for decades. Because of this, it has found its way into school textbooks. We have to know that it has been welcomed with open arms by many religious leaders in addition to experts. Those are usually not happy about new scientific theories. Since the middle of the twentieth century, all popes have repeatedly admired the idea of the big bang as the beginning of the universe. They like to point out that this is a fine example of the complementary relationship between science and religion.

Namely, science can very well explain and describe what is happening in space backward until the first moments after the big bang, when the universe is supposed to have formed together with space and time; to the question of what was going on right at the beginning, however, the theory does not yet have clear answers. Equations that describe the universe very well from the fraction of a second onwards fail in such extreme conditions as they did at the beginning. And here, religion quickly jumps in because this very first moment, which science (yet) cannot explain, is beautifully described in the Bible according to many believers. According to this widespread interpretation, the beginning of the universe is supposed to be in the domain of religion. Understanding what is happening in the universe later is generously left to science.

The End of the Truce Is in Sight 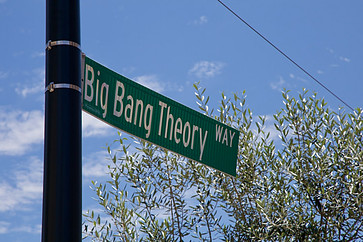 However, this temporary truce in the eternal struggle between science and religion in the field of cosmology that has reigned for the last half-century is slowly coming to an end. Namely, theories are becoming more and more popular, which no longer have vague moments to which various supernatural interpretations can be attached, which otherwise have nothing to look for in science. It may well be those religious dignitaries, with the same zeal as they now criticize Darwinism, will soon be striving for cosmology as well. Suppose Darwin’s theory of natural selection succeeded in explaining how nature itself can create complex living beings without the need for any prior plan or the help of a higher power. In that case, cosmologists are now trying to explain how purely natural mechanisms could have come about the big bang or the beginning of the universe as we know it today.

Cosmologists Paul J. Steinhardt of Princeton University in the United States and Neil Turok of Cambridge, England, who have had a significant past influence on theories of space evolution, have been trying in recent years to develop a new hypothesis that the Big Bang is no longer an unexplained event but only one of the stages in the completed cyclical cycle of the continual rebirth of one and the same universe. In their new cosmological hypothesis, the big bang is not a one-time event but is repeated cyclically in an infinite series at very long intervals lasting trillions of years.

In their recently published book Endless Universe: Beyond the Big Bang (Doubleday, 2007), they wrote that “the history of the universe can be imagined as a theatrical performance in which actors in the form of energy, matter, stars, and planets dance on a cosmic stage. The laws of physics determine it. The challenge for cosmologists is to grasp the play’s story, even though they came to the theater 14 billion years too late, long after the decisive opening scenes. ”

Astronomers Can Reliably Reconstruct the Story of the Universe’s

With the help of careful observation of stars, galaxies, and especially the oldest light that has traveled through space since the time soon after the big bang, astronomers have already created an excellent idea of ​​the current image of the universe. With the help of knowledge of physical laws, they can reliably reconstruct the story of the universe’s development back to the first moments.

Steinhardt and Turok call the period in the universe’s history, which begins just one second after the Big Bang and lasts until today, the second act of a cosmic theatrical performance. This era is more or less explained, and there are no significant differences among experts in reconstructing the story in this act. Surprisingly, however, accurate knowledge of the story of the second act also does not allow scientists to determine what happened before and what will happen later. There are at least two scientific severe theories about the universe’s evolution that both have the same second act, but the first and third acts are entirely different.

The idea that Steinhardt and Turok are betting on sounds more unusual at first than any science fiction story. But in modern physics, we are already accustomed to seemingly completely unrealistic hypotheses, which experiments can later confirm. Quantum physics describes events in the world of microscopic distances between atoms in great detail, while the general theory of relativity reigns in the world of large distances between stars. Each of them is entirely consistent with all the experiments that physicists have come up with to test them. But when we want to combine them into a single theory, problems arise.

Combining the two fundamental theories of modern physics in recent years has thrived best on string theory, according to which the fundamental particles from which everything in our universe is built are nothing but very, very small oscillating strings. The different vibrations of such strings are outwardly manifested as different types of elementary particles, as we already know them well today. But string theory gives meaningful solutions only if we assume that there are some additional spatial dimensions in addition to the ones we know, which are mostly so cleverly twisted that we don’t even notice them.

Our Universe Is Only a Part of This Multidimensional Space

Steinhardt and Turok listened to a lecture on a hypothetical scenario where there were two branes in such a multidimensional space of string theory at a scientific conference in 1998 where physicists presented their research in string theory. What would that mean? What if the branes collide with each other? Mathematically, theorists have already debated such scenarios, but no one seriously thought that a collision between branes could correspond to some known physical process.

The Big Bang Theory of the Universe and Cyclical Universe

Both cosmologists immediately thought of the enormous energy released at the universe’s beginning in an explosion we call the Big Bang. What if the big bang is really the result of such a collision of two harrows? At first, the idea was absolutely fantastic. Still, the physicists diligently undertook the calculations, and after many months of work, they managed to show that the collision of two branes can also create a universe like ours.

Their theory assumes that two branes or two universes float like two sheets of paper next to each other. Of course, we must be aware that this parable with slips is only a simplification, as each of the two universes is three-dimensional, and the distance between them is expressed in one of the additional spatial dimensions introduced by string theory. Branes are attracted to each other, and when they collide at some point, it looks like a big bang inside the brane.

So, the Big Bang Theory of the Universe Is Based on a Collision of Two Universes

According to their hypothesis, which they named the cyclical universe, the big bang results from a collision of two universes in a higher dimension, which is constantly repeated. The first act in their reconstruction of the script of a cosmic theatrical performance is the collision of two branes, which triggers a very similar event in space as in the classic model of space development: very rapid inflation of space, which cosmologists called cosmic inflation. As we have already said, the second action is the same and well supported by observations in both models of development. In the third act, however, the differences occur again.

Both models predict further inflation of the universe, with matter becoming increasingly rare and there is more and more empty interstellar space. However, in the cyclical universe model, unlike the classic model, not everything ends with the dark age, when the stars use up their fuel and stop radiating, and the universe inflates beyond all limits. When a lot of time has passed, and it seems that the universe is already utterly empty because there is only a particle floating in it here and there, the two branes start to get closer to each other again. When they collide again, the whole cycle repeats itself with a new big bang.