Saint Joseph the Worker and the Feast of Worker

In 1955 the Great Pope Pius XII introduced the feast of Saint Joseph the Worker into the church year. He decreed that the holiday be celebrated on May 1. In 1889, the so-called Second International decided to celebrate May 1 as World Labor Day. In the same year, Pope Leo XIII. publishes his encyclical on St. Joseph Quamquam pluries and in it “refers workers and all people of humble circumstances to St. Joseph ‘as a model and example to follow.” 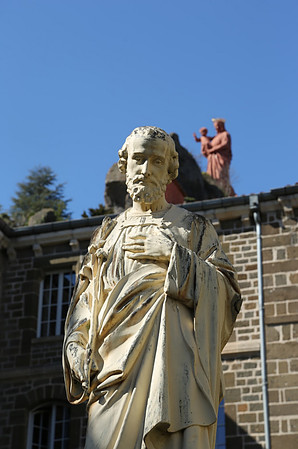 The Scriptures of the New Testament only mention Joseph’s occupation in one place. This is in the Gospel of Matthew, which describes Jesus ’return to Nazareth. “He came to his homeland and taught the world in their synagogue that they admired and said: ‘Where did this wisdom and miraculous power come from? Is he not the son of a carpenter” (Mt 13:54). Scripture mentions Joseph by name more than 12 times and only once speaks of his occupation. Because he was a carpenter, at first glance, it may seem that his patronage over the workers is completely justified. I say at first sight because, for example, the Bible speaks about St. Paul being a manual worker in 7 places. He himself writes “that he suffered day and night” (cf. 1 Thess 2: 9). Yet the Church does not appoint St. Paul but St. Joseph for the example of the workers. And as he does so, then he wants to say that Joseph’s daily business and his work were not just pure efforts but a willingness to serve in faithful obedience to the mystery of the incarnation of the Son of God and the work of redemption. And that should be the meaning of the work of every Christian worker. Work should be apostolic ministry, cooperation with Christ in the work of salvation.

Quiet and Faithful Consecration of Everyday Work Is the Most Important

And suppose one ancient Christian writer – Pseudo-Dionysius – wrote “that of all the divine works the most divine is the divine cooperation for the salvation of souls.” In that case, the work of the Christian worker, placed in the service of salvation, takes on divine proportions. When, therefore, Pius XII. introduced the feast of St. Josip Worker, he meant the “quiet and faithful consecration of everyday work,” as did the most excellent silencer – St. Joseph, and at the same time a saint who the Mother of God Mary only surpasses him. Care of Pius XII. he did not hesitate to call it “the purest, holiest, most exalted of all God’s creatures.” Therefore, that giant, among the saints and spiritual greats, was by profession only a “carpenter” – a carpenter, a worker.

The Rights of Every Man and Not Only for Workers

Marxist ideology elevates the worker and thinks that it is the only one that promotes his ascension. But long before Marx, the worker in Christianity was honored first by Christ who worked and thus consecrated work, and then by those closest to him: Mary and Joseph, who were workers, people who labored to earn their daily bread. It is justified to fight for the worker’s rights. But not only for workers but for the rights of every man. With the introduction of the feast of St. Joseph the Worker, The Church wants to warn of that divine determinant that elevates and perfects the Christian worker the most. By doing so, he “contributes to the historical realization of God’s plan” (cf. Pastoral Decree of the Second Vatican Council Joy and Hope, no. 34).

Prayer of Saint Josip the Worker

The glorious Saint Joseph, the model of all workers, I beg you for mercy to do my work in the spirit of penance and thus to be satisfied for my many sins. To do them conscientiously, not paying attention to my preferences, but only to my duty. To carry them out with gratitude and joy considering a great honor. To be able to use and perfect the natural gifts that God has given me. To do them neatly and calmly, moderately and patiently, and never back away from fatigue and difficulty. To do them, especially in pure intent, renouncing myself. All this is in remembrance of death, and at the expense, I will have to pay for every lost hour, unused gifts, missed good deeds, and vain complacency in success, which thus offends the acts done to God for love. All to Jesus and Mary for love and, following your example, Saint Joseph! Let this be my guiding thought in life and death.
Amen