Something is missing in the old debate between atheists and believers. The litigants agreed that they disagreed and that, at best, they were willing to respect each other: some people believe that He exists, and some people know that He does not exist. And that should be all, with the remark that this discussion believers approach, as they say, with the heart and that atheists most often come it with the mind. The discussion of clericalism and institutionalized forms of communication with God, the various types of that communication, their mutual hatred, and tolerance about the various gods, in general, is entirely different. There is a merit that is incomparably more important than the question of whether God exists or not: “Does God have a right to exist if God is omnipotent, omniscient, omnipresent?”

What consequences could the existence of an omnipotent, omniscient, omnipresent being of supernatural abilities have for every man and all humanity?

The beings who created everything know everything in advance, backward, forever, now, left, and right. Beings who hold all the strings in their hands, control everything day and night and tirelessly, command, codify, organize, strike with lightning, inspire, punish, forgive, bestow, take, persecute, and are present in arises from everything, enters into everything. These beings are, in fact, everything, the highest instance that deserves prayers and Love; moreover, love itself is as such. In short: absolute, being, essence. 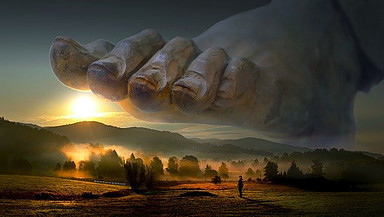 Every thought, decision, emotion, endeavor, destiny in general, and metabolism, dreams, desires, and instincts are controlled by an invisible power. Our everyday life, its smaller and larger joys and pleasures, our victories and defeats, are just a part of one big scenario on which we have no significant influence. Natural and biological laws are only a consequence of his will and his plan. Our will is an illusion and our knowledge a futile whim. Thus, meaning is taken away from everything and everyone just so that God would present himself as – meaning. There is no such thorough Gestapo, such a cruel Check, nor such a cynical Orwell’s O’Brien. All eavesdropping devices, informants, and confessions extorted by torture are nothing compared to the possibilities and means available to God. There is no such thing as propaganda terror, those bonfires and censorship that would be more efficient and terrible than banning blasphemy. There is no asylum, no vacuum, no country, no international waters where his sovereignty does not reach. He not only knows everything about each of us, but he also manages us and breaks our will in a way that the most terrible dictators never even dreamed.

Whether it is an illusion, a fabrication, a metaphor, a lie, Planck’s quantum field, a monolith from Clarke’s Odyssey, a bastard of metaphysics, the Big Bang, or just opium for the people, there are many. If it is from God – it is too much. Even if, as they say, it is all good, it is tasteless. No one deserves so much trust. Even if he were to perform his duties in the best possible way, it is not suitable for someone to have so much power. Not only because power corrupts but because power is offensive, and divine power is absolutely offensive. When someone is omnipotent, it becomes irrelevant whether he has good or bad intentions and whether he has any intentions because omnipotence is something disgusting.

Even the Church Doesn’t Like That God Is Omnipotent, Omniscient, Omnipresent

In the end, it is not in the interest of the church and the clergy that there is something so powerful; it interferes in their affairs and spoils their human plans. Both the church and the clergy need to be defended, saved from God. Their attempts to communicate with him are compassionate anyway. There is something unspeakably sad in every God-fearing ritual. Whatever they are, it is not the priests’ fault. It’s God’s fault. The very existence of such boundless power is a physical and moral threat to our civilization, and even to religion, the beauty of sacred architecture, Bach’s fugues, and Michelangelo’s frescoes, but also the fate of every man, every living being, every mountain, every river, all planets, the whole universe. With it, the starry sky becomes the ceiling of a prison cell.

That Is Unbearable. Whoever He Is and Whatever His Name Is

Even if it were the magnificent pagan Sun, its radiance would – as Nietzsche says – be null and void if we would not exist to illuminate us. It doesn’t matter if he is an ancient thunderer, a creature staring at us like a child in an anthill, or a monotheistic monster who cowardly hides in the Forbidden City of Inexhaustibility. He responds to prayer with fear, the hope of duty, and seduces his subjects with the beauty of transcendence, the beauty of fairy tales, the beauty of serenity. His goodness, his justice, and his forgiveness are as offensive as Pharaoh’s whim. How can we trust the same bully who promised us protection after he sold us a brick? Beg him? As Bukharin begged Stalin in letters from Lubyanka, would he not try to alleviate fear and pain with the despair of faith? In the hope that his penance will one day give the Crime a Higher Meaning. The very possibility, the very idea of ​​conscious and thoughtful, superhuman, good or bad, any Higher Power is so inhuman and cruel that it is miraculous – truly divinely miraculous – that humanity has not yet exploded with rage at the very thought of God. God is the greatest humiliation in the history of humankind.

No, This Is Not Blasphemy

No, this is not blasphemy. God is blasphemy. God is the tremendous desecration of conscience and freedom. Suppose God, as is sometimes claimed, is conscience itself. In that case, it is better to be without conscience. Giving up conscience is a morally responsible and heroic decision, the only available Choice and the only remaining form of resistance. If the conscience is of divine origin, then man is the only evil servant of God. In this case, the whole architecture of human ethics collapses, and moral responsibility is reduced to a single virtue: the horror of obedience.

The Son of a Christian God Was Cruelly Executed

Legend has it that he redeemed and saved us with his sacrifice. His suffering deserves all sympathy, but suffering is not a guarantee of the moral superiority of the sufferer. Martyrdom is a tragedy, not a virtue. When instead of empathy he expects awe, martyrdom becomes moral madness or banal cunning that trifles with its torment and other people’s goodness, or it becomes salvation that has charged us to imprison us in shame, feverish gratitude, and fear that we will never repay that debt. However, sincere condolences begin where duty ends. Morality and law oblige us only not to cause suffering, which is not a small thing. It is sufficient. That’s really all. On the other hand, when the emotion becomes an obligation, then our ability to love and empathize is crippled and transformed into a moral panic. There is probably no more perfidious assault on freedom of conscience, on freedom at all.

In every willingness to sacrifice and in every self-denial lies an aggressive egoism or some similar last intention that wants to replace the freedom of emotional spontaneity with remorse. God is a great teacher of hypocrisy. That is why everyone should deal with their sins, conscience, and Salvation as they know and can, clearly on the condition that they do not harm themselves or others. Only in this way can we be saved from Salvation, which blackmails us morally and emotionally with a cruel execution in order to cause us guilt (actually) because we exist at all. To say that the Almighty should feel guilt for all human suffering belongs to the level of parish moralizing. We must not care whether that feeling guilty or not, as it does not matter whether it produces happiness or suffering because it is shameful. After all, it is in principle inadmissible for someone, something, anything, anyone – except ourselves – to make decisions about our suffering or our happiness.

Not even the well-known and widespread human need for a master and authority; the need for the womb of a multitude in which there is no torment of moral decisions, the risk of intellectual curiosity, and the beauty of uncertainty, gives God the right to do so.

If God Is Omnipotent, Omniscient, Omnipresent Than He Has No Legitimacy

Neither the great and dear Béla Hamvas, nor Händel’s Hallelujah, nor all the believers of this world can give it to him. Least of all those strange and uncomfortable rituals that glorify him. God has no legitimacy. A tyrant cannot even have it, even if the slave blindly and sincerely adores him. Believers are our brothers in that terrible trouble. We have all been struck by this heavenly dictatorship, and the faithful are its greatest victims. They didn’t even have a choice because the old Abuser bought their souls cheaply when they were children.

Pray? Him? God? No. Never. We demand, we order – with freedom of will and purity of conscience – his unconditional surrender, the cessation of human and earthly affairs, and the strictest prohibition of influencing anyone’s thoughts, feelings, and actions. Our tone is ultimate because higher beings and powerful people deserve neither political correctness nor the Great Initial Letter. Only sometimes, for stylistic reasons or some similar craze.

If he created everything, both the universe and life and people.

Then he did not acquire the property of our conscience, our reason, our mental and physical integrity, and our whims. We can allow the possibility of winning at roulette, orgasm, love, and – as Huxley says in Counterpoint – Beethoven’s string quartets are valid and irrefutable proof that God still exists. So what? It’s none of our business. We won’t force him to kneel and beg for forgiveness anyway because we don’t want to be like him. One man nicely remarked, otherwise very unsympathetic, that Michelangelo’s David looks like a man who doesn’t need God. The knowledge that it does not exist is, we know, accurate and straightforward but also useless. It is just a forced reaction to one unnecessary and bizarre idea. Incomparably more important is the realization that God does not deserve to exist. The proof of that is Human Dignity. We will win in that sign.