We do not find many interesting facts and anecdotes about the Former Pope Benedict with name Joseph Ratzinger. Well, something can be found. He was a rather serious and reserved man. His role as a theological and pastoral teacher is indisputable. However, by his Germanic origin, he did not precisely carry his character traits on a platter.

The Dream Profession of Former Pope Benedict Was Priest 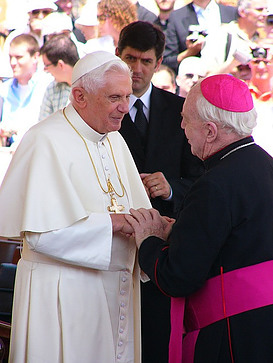 Little Jožef wanted a Mass prayer book, Mass clothes, and a picture of the heart of Jesus for Christmas for his seventh birthday. He wrote a letter to Jesus, which has been preserved to this day and from which we can understand that priesthood was his heart’s desire from the earliest years.

“Dear child Jesus, come quickly to earth. You will bring joy to the children. Bring me joy too. I want a Volks-Schott (mass prayer book), green mass vestments, and the heart of Jesus. I will always be good. Greetings from Joseph Ratzinger.” Christmas 1934

Pope Benedict XVI was a big cat lover. He couldn’t have them in the Vatican, and the first thing he said when he left the Vatican was how happy he was to be living with his cats again. There was even a book called Joseph and Kiko, in which his cat tells the Pope’s biography.

Pope Benedict XVI has said publicly many times that he is a big fan of Giovannino Guareschi’s stories about a village priest and a proletarian mayor who are constantly on a war footing. He allegedly watched the series regularly and even knew many of the plots by heart. The two protagonists represent society and the contradictions between Christian Democrats and Communists in Italy in the 1950s and 1960s. The message of the stories, however, is profoundly universal.

He spent his childhood in Nazi Germany and was criticized by some for this, even though his family was strongly anti-Nazi. At the age of fourteen, he was included in the Hilterjugend. Joseph was later sent as part of this to Hungary, from where he deserted and was threatened with death.

His last words were in his mother tongue: Jesus, ich Liebe Dich! On all German Catholic portals, tears of sadness are being shed, but there is also a little pride in the fact that their nation, after centuries, gave a pope and, as it seems, a greater one than we knew during his lifetime.

Pope Benedict XVI dug deep into the papal wardrobe and surprised the public with a couple of rather bold pieces from the history of the Church. His predecessor, who is actually the only pope most people remember personally who has represented the papacy for the past few decades, swore by plain wardrobe. So does his successor. Benedikt also showed a bit of fashion character. And rightly so; every pope is different, every period in the history of the Church is different, and it would be boring if it weren’t so. Back then, they made fun of him a bit if Santa Claus lent him a dress.

As an emeritus pope, many wanted to make him an ideological leader of their path, which was directed against the current pope. Both the “dubia cardinals” and later the traditionalists tried to put him at their head, and the current pope slightly clipped their wings because they were too arrogant to fly with them. Joseph Ratzinger rejected everything without exception and repeatedly and on a different occasion, clearly showed that he was in complete unity with Pope Francis and that he is not and will not be anyone’s puppet and figure. Pope Francis deeply respected him and consulted him.

It is necessary to admit that these two Catholic gentlemen perfectly handled the unusual situation of two popes and allowed themselves to be guided by the Holy Spirit. Historically, such situations were usually resolved with swords and blood. Obviously, we have progressed as humanity.

Although some – probably precisely because of his theological greatness and decades of service high up in the Vatican hierarchy – criticized him for being a representative of the ossified cast of the Church hierarchy and, as such unable to bring living water to the modern world, he proved to be completely different as Pope. He showed himself to be a true servant of servants who accepted a job that was not primarily a more incredible honor but a greater responsibility. He proved to be an extremely humble pope, and last but not least – in the spirit of a world that values external success – he decided to resign. Having done the best he could in his place, he said: “We are unprofitable servants; we have done what we were bound to do,” and he gave way to another to whom the finger of the Holy Spirit pointed. He showed what the Pope’s job is – a servant of servants.

Farewell Servus servorum, and thank you for your service to us unprofitable servants who still rebel against our Lord. Pray for us!