Calm Your Monkey Mind, and You Will Find Your Inner Peace

The most common cause of nervousness is excessive functioning of the mind. So calm your monkey mind, and you will find your inner peace.

I once read a story in a book when the author observed a man talking (fighting) to himself while walking down the street. Apparently, he was a mentally disturbed man with some form of schizophrenia. After their paths diverged, however, the author noticed a similar happening in himself, only he did not quarrel with himself out loud, but quietly in his mind. This experience led him to realize that we are all bit schizophrenics because our minds are constantly on the move. This fact takes a lot of energy from us, but it can also lead to severe illnesses (e.g., insomnia, depression, anxiety, panic, (). In Buddhism, nervousness is considered an excessive mental activity, for which they have an exciting term “monkey mind.”

The human mind often behaves like a monkey out of control.

Calm Your Monkey Mind, and the Nervousness Will Disappear 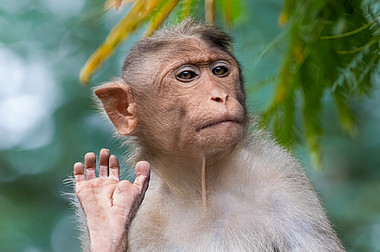 Our mind works excitingly. Have you ever watched what happens when you quarrel with yourself or when you think about something? The mind is constantly spinning in a circle and dealing with (usually negative) experiences from the past or fears of the future. This often reminds me of the operation of a computer that has (too) many programs open at the same time. That’s when it often happens that the computer “hangs.” This means that the processor is running at full capacity but cannot process all the data (because there is simply too much of it). Mental whining is almost always associated with negative emotions such as various fears, disappointments, envy, worries. So how do you stop whining and calm a monkey in your mind?

1. Let Us Learn to Calm Your Monkey Mind

If we want nervousness to leave us, we must first learn to calm our minds. The mind works on the principle of a snowball. This means that one thought triggers another; this triggers a third,… The problem we initially “processed” is getting bigger and bigger, and eventually, such a state leads us to a practically unsolvable problem. Much like a computer that gets caught in its own loop and needs to be “reset.” The best way to calm the mind is energy release, in which the primary purpose is to get into a state without thoughts. In this state, the mind “resets,” and the problems lose all weight instantly. We are open to the cosmic energy that brings us well-being and fresh ideas relaxed.

2. We Learn to Make the Body Energetically Flow

As I described in the previous paragraph, excessive thinking and whining are associated with negative emotions. When we are in a negative emotional state caused by excessive mental activity and nervousness, our body shrinks. This means that the energy flow along the energy pathways (meridians) is blocked, leading to other negative emotions. In this way, we quickly fall into a negative spiral that can lead us to depression. The easiest way to establish energy flow is to breathe deeply. In this technique, we sit on a chair to take a deep breath into the abdomen so that the spine is straight. On the inhale, the abdomen expands, and on the exhale, it contracts. Inhale through the nose and exhale through the mouth (you can also inhale loudly if you do not disturb anyone)

3. Let’s Learn to Break the Snowball

The easiest way to do this is to smile. In addition to constricting the body when overthinking, the face also constricts. With a smile, we quickly relax the face and, in this way, break the snowball. At the same time, we can imagine a phrase that will help us be more relaxed (e.g., life is a game, it will not matter on my deathbed, it does not bother great spirits, it will be somehow,…). Instead of smiling, we can also laugh out loud. Nervousness subsided.

4. Do Not Believe Your Thoughts

Have you ever perceived that all thoughts are just views created by your mind? So these are entirely subjective views; you could even say they are lies. Our mind lies all the time. It does not show us an objective picture but a subjective picture of situations that is the fruit of our past experiences. The next time you find yourself facing an unsolvable problem, be aware that your mind is lying and that the situation is not at all what it seems at first glance.

Nervousness Is a Common Occurrence in Modern Man

Nowadays, we can meet many people who are nervous every day. According to some estimates, about a fifth of the world’s population is said to be nervous. You’ve probably noticed a person in a meeting who constantly blinks his legs or arms, or a person who bites his nails, or a person who constantly looks at the phone or hour. Often, nervousness is also associated with other symptoms of mental irritability (e.g., anxiety, insomnia, relationship problems, inability to concentrate,…).

People often try to eliminate nervousness in unhealthy ways, such as excessive alcohol consumption, smoking, taking sedatives. Did you know that nervousness is also a very lucrative business for the pharmaceutical industry? The global antidepressant market in 2017 was just over 14 billion USD. Every year the market grows by 2.1%. Thus, by 2023, the market will grow to almost 16 billion USD. Allied Market Research did the research.

Stillness Is the Key by Ryan Holiday is an excellent book on this topic. You can find more about this superb book HERE.