Aliens in the Bible – Magic or Reality?

RECENT footage of unidentified flying objects, released by the U.S. military, has again sparked a debate over whether superior space civilizations are visiting us. I do not have a fundamental problem with such a thesis, although I am far from considering what we had the opportunity to see in the recordings as final proof. I agree with all rational people that this topic should be explored in more detail and not left to the mercy of fantasists in the wake of Erich von Däniken’s wacky ideas. If being visited us from distant cosmic expanses, great, we get in touch with them. They could tell us how to protect ourselves from self-destruction. I become much more skeptical, though, when someone tries to convince me of encounters with aliens in the Bible. I’m not saying this is completely ruled out; the only thing that didn’t convince me was the arguments offered so far.

An Engineer Interprets the Aliens in the Bible 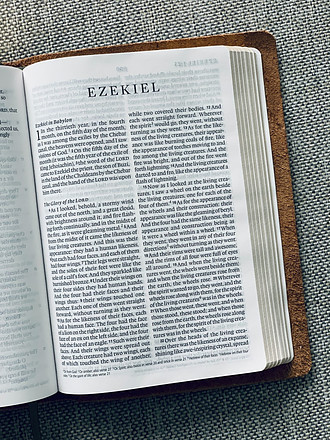 Perhaps the most famous (but not the only) is to mention the vision of the prophet Ezekiel in the first chapter of his book. I definitely advise readers to type Ezekiel 1 into the search engine (or take a Bible from the shelf in any translation) and read the text independently.

The idea that this was a spaceship existed long before NASA engineer Josef Blumrich decided in 1973 to write the book Ezekiel’s Spaceships.

Blumrich set out to write the book to refute this UFO interpretation of the prophet’s vision, but then, researching the text, he became firmly convinced that it was a description of a spacecraft that we humans still do not have. He read the text in six different translations, and in the end, the description of the wheel in that vision even inspired him to own a patent for the so-called Omni wheel, which has an additional dimension of rotation.

Unlike the general public, biblical interpreters were much less impressed by Blumrich’s biblical text analysis. Before I show the problem, I would like to cite a decades-later analysis by Mauro Biglino, a top expert on the Hebrew text of the Old Testament.

In his book with the pompous title “The book that will forever change our ideas about the Bible: The Gods coming from space,” Biglino – unlike Blumrich – does not go into different translations of the text. He offers the original biblical text, as preserved in the most famous (Masoretic) tradition.

Biglino advocates two fundamental theses about aliens in the Bible:

1. This is not a particular mental state of the prophet, which is then called a vision – in other words, Ezekiel does not hallucinate but sees a tangible object that others could see.

2. that here Ezekiel does not meet God, as the classical translations suggest, but the gods, the Elohim. And then Biglino, without any hesitation, indicates that this is a spaceship, which he then describes in detail.

Indeed, one is fascinated by Biglin’s knowledge of the language. In addition, the topics he presents are attractive to the general public, so I am not surprised by his popularity. It is most accepted by readers who (like me) do not believe in the divine origin of the Bible but (unlike me) believe in the fundamental reality of the events described. In other words, Biglino thinks that here Ezekiel – an author about whom we know almost nothing – presented his authentic experience, which he interpreted in accordance with his religious beliefs, and which speaks not of any close encounter of the third kind with Yahweh, but with aliens.

The End of the Magic

Anyone who knows the biblical symbolism better immediately notices that Ezekiel sees four beings, each with four faces – which points to similar visions of the prophet Daniel about the world’s kingdoms. If anyone wants to think that there is no symbolism here, but that the aliens have human faces, on the one hand, lion on the other, oxen on the third, and eagle on the fourth – good luck.

The magic completely disappears the moment you start reading Ezekiel to the end of his story – because it doesn’t end in the first, but only towards the end of the third chapter. You would expect big messages from aliens about the secrets of the universe or their technology. But what they say could have been coined by an ordinary priest of the time. In short, if you don’t want to read another entire chapter and a half, the Israelites are not faithful to their God and will not change by any persuasion. After all, read the text for yourself and see if, at the time of the Israelites going into Babylonian captivity, the prophet Ezekiel had an encounter with guests from outer space, concerned about the Jews ’relationship with Yahweh.

Not to mention how fragile and naive Biglin’s conviction is that the Bible actually speaks of guests from the mysterious planet Nibiru, which – according to a very amateur interpretation by Zechariah Sitchin – is also mentioned in Sumerian writings. The story of a planet located far behind Neptune, with a very elongated elliptical orbit, on which there would be not only life but also a civilization much more advanced than ours, can only make even an amateur astronomy connoisseur laugh.

Once again – I would really like someone to take the phenomenon of UFOs more seriously so that it is no longer just an object of children’s imagination or charlatan gossip. The sheer size of the universe and all we know about the possibility of planets like our Earth (of which there could already be millions in our galaxy) speaks volumes about the possibility of extraterrestrial life and even civilization.

But it would be good to start researching this topic with all our scientific and technological achievements, ignoring dubious interpretations of ancient legends and myths.