The Evolution of the Universe and Man

The evolution of the universe and man is talked about in schools, especially right after the war, as a “death blow” to faith because science explained everything, how the world and man came into Being, and “fairy tales” from the Bible are against science. Many actually believed these claims and abandoned the faith. In reality, learning this way in schools only meant ignorance of religion and also ignorance of science and evolution itself.

The Evolution of the Universe and Man According to the Bible

The Bible does not intend to explain the natural sciences, zoology, biology, or astronomy; it teaches religious truths about the Being who created the world and placed in it all the laws that govern it, the laws of nature. He talks about God in a simple way that simple people of those times could understand. God created the world, all living things, and also a man. He puts this within the framework of seven days, but these are not days of 24 hours since the sun was not created until the fourth day. When he speaks of the first man and says that he made him from the dust of the earth, he does not mean that he “kneaded” Adam with his own hands because it is clear from the Bible that God is a spirit and has no hands. It just means that man is made of the same substance as the earth. God could not and did not want to explain to the people of that time how the earth and the universe were made. If he said that the earth is round, they would not believe him because they experienced the earth as a surface that floats on water, and water is also above the clouds because otherwise, it could not rain. 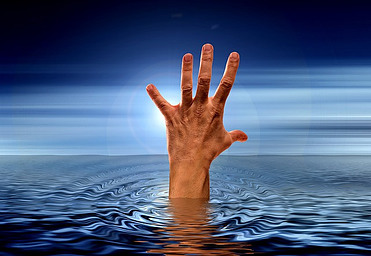 For salvation, it is not necessary to know all this but to know that God is the master of everything, the highest Being, the Engineer who planned the world. As he did it, we humans gradually discovered according to the reason he gave us. Today we know a lot about the universe, the earth, the living creatures on it, and especially about the man. But we also know that there are still so many things that we do not understand, have not discovered, and do not master. The more we know, the more new questions we don’t know how to answer. We will not find this in the Bible because it is not written to give us answers to such questions, but too much more important ones: where we are from, where we are going, who is the Lord of everything, and why he created us, how we should live, to reach our goal: a happy life with Him.

A Soul Is Not Made of Matter

What the Bible tells us about man is especially important. That God breathed into him a soul that is not made of matter. Through this soul, we became human, rational beings. This spiritual in us is not divisible and, therefore, cannot disintegrate or die. The soul reveals itself to us through reason, which is also something spiritual. With reason, we also realize that in addition to all this wonderful world, there must also be a Supreme Engineer who conceived it all, we can say here, created it.

Did Charles Darwin Give the Perfect Answer for the Evolution of the Universe and Man?

The father of evolution, Charles Darwin (1809-1882), wrote at the end of his most famous book: On the Origin of Species: Through Natural Selection: “It is a glorious thought that the Creator breathed life with its various forces originally into only a few forms, perhaps into a single, and that from such a simple beginning beautiful and wonderful forms developed, while our planet continued to revolve according to the firm law of gravity.” Evolution existed, and we can see its traces in nature and ourselves. Darwin, who, during his five-year trip around the world by ship (South America, the Galapagos Islands, Australia, Madagascar, and Africa), collected an abundance of fossils and specimens of flora and fauna, studied it at home and found many similarities and developed the theory of evolution. It was a brilliant idea, but he couldn’t justify it. How and why this evolution took place over the millennia. His explanation that the engine of evolution was the struggle for survival does not stand up to criticism. According to him, small changes gave some individuals an advantage and enabled them to survive in the “struggle for survival.” If I said these were significant changes, I would have to explain why they occurred. But small changes do not make it possible for an individual with these small advantages to survive. There are many factors in the fight for survival. Take the example of a rabbit with its hind legs designed to make great leaps. The first one, which had a few millimeters larger rear legs, could not survive the attackers because of this. If, for example, the wolf surprised him from close range, this advantage did not help him much. But the rabbit that did not have this advantage was saved if he saw the wolf in time.

What About the Theory of French Naturalist Lamarck?

At the beginning of the nineteenth century, the French naturalist Lamarck proposed the theory that life on earth evolved from one primordial Being. However, he was unable to prove this reliably. He proved that living beings develop those organs that use them more, which is true. That they leave this advantage to their descendants is not valid. For example, a weightlifter develops specific muscles through exercise, but his son will have very average muscles. He taught that living things have a tendency to evolve, but he could not prove it. So his theory failed and went almost into oblivion. Darwin, however, had an abundance of fossils and specimens of flora and fauna that confirmed some evolution. However, he could not prove how these differences developed.

Recognition of the Existence of the Engineer of the World

Evolution is generally accepted because the connections between individual species are apparent. Even today, no one has satisfactorily explained this evolution. Intermediate links are missing. If we suppose that the Supreme Engineer has placed, as Darwin says, in the beginnings of the development of laws, which at certain times set off sudden changes in the development of individual beings or species, the matter would be simple. But for this, it is necessary to recognize the Engineer of the world, which many do not want to recognize for ideological reasons.

In the beginning, the church was against evolution because they misused evolution to deny God, saying that now God is no longer needed because we know the development of the world and man. Later, theologians also realized that God – the Engineer with evolution is even more necessary. Regarding God, evolution does not solve anything. We have before us a wonderful structure of living and non-living beings, which reveals supreme expediency and orientation toward the goal. This, however, cannot exist without a supreme rational Being. We did not put laws into nature; we are only discovering them, and even that very slowly. When we find out DNA, that is the spiral with the record of development and changes through this development; we can be even more sure that nothing is by chance. If everything is written in our DNA, who wrote it all? Certainly not until a few thousand years ago, an illiterate man.

Maybe this explanation of mine has already tired you a bit, but let it give you the knowledge that science only further strengthens our understanding that we need God. Without him, we cannot explain the world, nor can evolution.